The human brain is a pattern-seeking machine.
We are evolved to look for correlations, probably because those correlations can be awfully useful.  Our habit of noticing patterns and cycles allowed the ancient Egyptians to figure out the timing of the Nile floods, essential for agriculture in a place that was (and is) a desert.  The people of east Africa did the same sort of thing with the monsoons.  In cool climates, knowing when the growing season was likely to start and end was absolutely critical.
The problem is, this same pattern-seeking feature can trick us into seeing illusory patterns in what are, in essence, random data.  Astrology relies on this sort of thing; a particularly common example recently is the freakout people have when Mercury goes into retrograde (an apparent backward motion of Mercury as seen from Earth because of their relative motion; obviously, Mercury doesn't actually start moving backwards).  Supposedly the whole world goes haywire when Mercury starts its retrograde motion, but believing this requires ignoring the fact that (1) Mercury goes into retrograde three or four times a year, for three or four weeks at a stretch, and (2) the world is kind of haywire all the time.  There's no reason to believe that humanity is any loonier during Mercury retrograde than it is at any other time of the year.
Sometimes those illusory patterns can be oddly convincing.  I remember when I was a kid that much was made of the strange coincidence that since William Henry Harrison was elected President of the United States in 1840, every presidential winner in a "zero year" has died in office: Harrison (1840), Lincoln (1860), Garfield (1880), McKinley (1900), Harding (1920), and Kennedy (1960).  Then Reagan (1980) and G. W. Bush (2000) stubbornly refused to die, forcing True Believers to come up with some kind of nonsense about how it was a 120-year curse and expired after JFK's assassination, or something.  Mostly, though, they just retreated in disarray, because it was a peculiar coincidence, not an actual meaningful pattern.
Fortunately, scientists have statistical methods for determining when you're looking at an actual pattern (i.e., whatever is happening occurs with a true cyclicity) and when you're just seeing random fluctuations or scatter in the data.  This can sometimes uncover odd patterns that are clearly real, but result from some as-yet unknown cause -- such as the natural disaster "heartbeat" that was the subject of a paper in Geoscience Frontiers last week.
Geologists Michael Rampino and Yuhong Zhu (of New York University) and Ken Caldeira (of the Carnegie Institution for Science) analyzed the timing of various major geologic events over the past 260 million years -- continental flood basalt eruptions, changes in the direction of plate movement, oceanic anoxia, major glaciations and changes in sea level, and mid-plate volcanism, as well as events like mass extinctions.  And they found that there was a statistically significant cyclicity to those events -- they tend to cluster every 27.5 million years, and have done so for hundreds of millions of years. 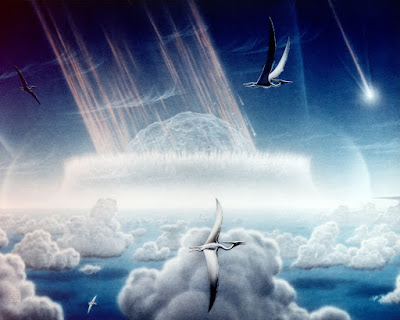 Artist's impression of the moment of the Chicxulub Impact 66 million years ago [Image is in the Public Domain courtesy of NASA and artist Donald E. Davis]
But detecting a pattern is not the same as determining what's behind it.  There is no known geological or astronomical event that occurs on a 27.5 million year cycle that might be the underlying cause of the periodic nature of catastrophes.  The authors throw out a few suggestions -- that it could be due to the motion of the Solar System relative to the rest of the Milky Way (oscillating above and below the plane of the galaxy, perhaps?), a thus-far unknown phenomenon originating in the motion of magma in the Earth's mantle, or the gravitational disturbance of the Oort Cloud by a massive, extremely distant planet orbiting the Sun.  (This latter idea has been around for a while; my college astronomy professor, Daniel Whitmire, was one of the first to treat it seriously, and he and his colleague John Matese wrote one of the first scholarly papers about the "Planet X" hypothesis.  But don't even start with me about Nibiru and the Annunaki, because I don't want to hear it.)
The upshot of it is we don't know.  But if you were worried, we're only about 7.5 million years past the last peak, so we have another twenty million or so years to go before the next one.  As optimistic as I am about my longevity, I seriously doubt I'll be around to see it.  The catastrophe clock has a lot of ticks left until the alarm goes off.
Which is a good thing.  As interesting as they are, flood basalt eruptions and oceanic anoxia and the rest are not events that would be fun to witness first-hand.
********************************************
Why do we have emotions?
It's a tougher question than it appears at first.  Emotions like joy and camaraderie can certainly act to strengthen social bonds; fear can warn us away from dangerous situations.  But how often do they get in the way?  The gray emotional vacuum of depression, the overwhelming distress of anxiety and panic disorder, and the unreasoning terror of phobias can be debilitating enough to prevent anything like normal day-to-day functioning.
In Projections: A Story of Human Emotions by Stanford University professor of bioengineering and psychiatry Karl Deisseroth, we take a look at case studies of emotions gone awry -- in Deisseroth's words, "using the broken to illuminate the unbroken."  His deeply empathetic and utterly fascinating account takes the reader through what can go wrong in our emotional systems, and the most recent, cutting-edge research in how the neurological underpinnings of our brains create our emotional world.
It is brilliant reading for anyone wanting to know more about where our feelings come from, and who seek to follow the ancient Greek maxim of γνῶθι σεαυτόν -- "know thyself."