I remember how blown away I was when I first saw British science historian James Burke's documentary After the Warming, shortly after its release in 1991.  Its intent was ambitious, to say the least; to trace the effects of climate on humanity, from prehistory up to and beyond the point where (in Burke's words) "the climate stopped doing things to us, and we started doing things to it."

What struck me most is something that at this point is much more widely known; that the periodic warming and cooling had dramatic effects on sea level.  Up during warm periods, down during cold ones, enough to open and close land passages from one place to the other.  The most famous is the "Bering Land Bridge" between what are now Siberia and Alaska, but similar pathways existed across what are now the English Channel and the Gulf of Carpentaria (between Australia and New Guinea).

It shouldn't have been surprising, science geek that I am, but I'd honestly never thought that much about it.  The idea that climatic shifts affected history in such a profound way was an eye-opener.  Take, for example, the Little Ice Age, that started in the mid-fourteenth century and continued into the eighteenth, which had dramatic effects on the climate of northern Europe.  Prior to this, it'd been warm enough that shipping lanes to places like Iceland, Greenland, and Svalbard were open all year long; very quickly, they became impassible ice in the winter, and plagued by devastating storms in the summer.  All of this shut down what had been a thriving avenue for commerce and colonization.  The Icelanders survived okay; but the Greenlanders weren't so lucky.  All of the Viking era Greenland settlements were frozen out by 1400.

The idea was such a poignant one to me -- thinking about what it would be like to be one of the last settlers left alive, knowing you were stranded -- that it inspired me to write a poem called "Greenland Colony 1375," which is not only one of the very few poems I've ever written, but is the only piece of writing I've ever won a prize for -- second place in the 1999 Writers' Journal national poetry contest, an honor that still kid of blows me away when I think about it.

The reason all this comes up is a new study that appeared this week in Proceedings of the National Academy of Science suggesting that major impacts on the human species have been happening for a lot longer than even Burke's documentary covered.  A climatic teeter-totter called the "Wake Circulation" caused a back-and-forth swing of wet and dry from the east to the west part of the African continent, much as the monsoons do on a yearly basis.

That's enough time for an entire ecosystem to form.  Then when the climate changes, what were great adaptations for that habitat suddenly aren't any more, and either you move or you die.  But one other possibility is to live in an ecotone -- the transitional area between two climatic regions.  Since the rainfall didn't disappear from the continent as a whole, just shifted from one side to the other, the ecotone regions didn't move much.  The organisms that made it through the climate shifts tended to be ones that lived in ecotones.

"This alternation between dry and wet periods appeared to have governed the dispersion and evolution of vegetation as well as mammals in eastern and western Africa," said Stefanie Kaboth-Bahr of the University of Potsdam, who led the study.  "The resultant environmental patchwork was likely to have been a critical component of human evolution and early demography as well." 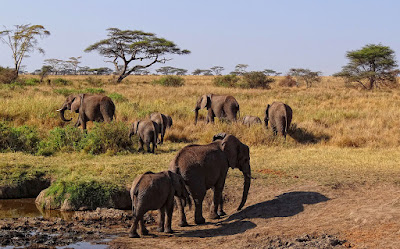 "We see the archaeological signatures of early members of our species all across Africa," said Eleanor Scerri, of the Max Planck Institute, who co-authored the study.  "Innovations come and go and are often re-invented, suggesting that our deep population history saw a constant saw-tooth like pattern of local population growth and collapse.  Ecotonal regions may have provided areas for longer term population continuity, ensuring that the larger human population kept going, even if local populations often went extinct."

So we may owe our success -- and possibly even our existence -- to our evolving in an ecological borderland, and surviving while other, more specialized, species became extinct when their biome's climate shifted.
All of this, of course, makes me wonder what the long-term outcome of our current idiotic, la-la-la-la-not-listening climate policy will be.  Will our long-standing flexibility save us -- or will we be, like the tragic last settlers in Greenland, done in by our own short-sightedness?