I've posted here before about dark matter, the mysterious substance which -- if current models are even close to correct -- makes up 27% of the matter/energy density of the universe.  Even more mysterious is dark energy, which is thought to be responsible for the acceleration of the universe's expansion; that's another 68% percent.

Yes, the implication is what it sounds like.  Ordinary matter -- like you, me, the Earth, all the planets and stars and galaxies -- accounts for a measly 5% of the matter/energy in the universe.

Most frustrating of all is how little we know for sure about dark matter and dark energy.  To date, every experiment to detect a particle of either one has failed.  In fact, we don't even know if either one is made of particles.  (If not, what it might be made of is an open question.)  Some scientists have compared it to the luminiferous aether, which according to nineteenth century physicists was the substance through which light waves allegedly propagated.  Every wave they knew about traveled in some sort of medium; water waves, sound waves in the air, vibrations in a fiddle string.  That light might travel in a vacuum -- that it might not need a medium -- was incomprehensible.

In the words of one of my college physics professors: "If light waves don't need a medium, then what, exactly, is waving?"

It took Einstein to come up with the answer to this, and in the process proved that the luminiferous aether didn't exist.  The result revolutionized physics.  I've heard physicists say that dark matter and dark energy are this century's aether -- artifacts of measurement created by a fundamental piece of our model being misunderstood, missing, or flat-out wrong.

Be that as it may, if dark matter is an error, it's a pretty persistent one.  We haven't been able to detect it other than by its gravitational signature, but that signature is a bold flourish.  The discovery of it, by astronomer Vera Rubin and others, came about because measurements of the spin rate of galaxies indicated there had to be some extra mass holding them together; at the measured rotation rates, they should fly apart.  That extra mass turned out to be huge.  The best estimates were that there had to be over five times as much of this invisible matter as there was ordinary matter -- and that estimate held for every galaxy studied, so it wasn't a local phenomenon.

A paper last week in The Astrophysical Journal adds a new layer to dark matter not being local.  Astrophysicists Sungwook Hong, Donghui Jeong, Ho Seong Hwang, and Juhan Kim, of Pennsylvania State University, have created the most detailed map yet of the dark matter in the universe, using the known motion of seventeen thousand galaxies.  Strangest of all is that whatever this weird, invisible -- but extremely common -- substance is, it's not distributed uniformly.

Not only are there lumps of it within galaxies, holding them together, there are long filaments of dark matter between them -- threading the galaxies together like dewdrops clinging to an enormous spiderweb.

Another feature that makes the spiderweb analogy even more apt is that there are huge voids, nearly devoid of... just about everything, including dark matter.  One of them, the Boötes Void, is 330 million light years across. 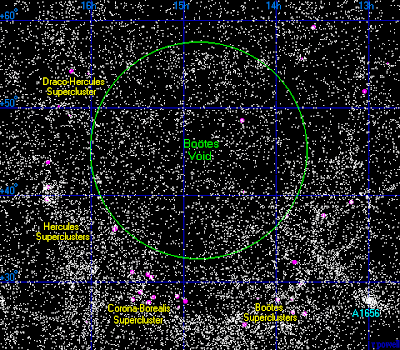 To put that number in some perspective, if you took the Sun and the rest of the Solar System and put it in the middle of the Boötes Void, the night sky would be completely dark.  No stars at all.  In fact, it wouldn't have been until the 1960s that we would have had telescopes powerful enough to see the nearest galaxies; until that time, we would have thought the Sun was the only star in the entire universe.

So whatever dark matter is, we're gradually closing in on it.  We know how it affects ordinary matter gravitationally, and now we have a map of how it's distributed in the universe.  Maybe soon we'll have an idea of what it actually is.

Of course, then we still have dark energy to tackle, and there's over twice as much of that stuff as there is dark matter.  So, as is usual in science, we're not going to run out of mysteries to investigate any time soon.