The moral of the story

I was asked an interesting question yesterday, that I thought would make a great topic for this week's Fiction Friday: does a good story always have a moral?

My contention is even stories that are purely for entertainment still often do have morals.  Consider Dave Barry's novel Big Trouble, a lunatic romp in south Florida that for me would be in the running for the funniest novel ever written.  Without stretching credulity too much, you could claim that Big Trouble has the theme "love, loyalty, and kindness are always worth it."  Certainly the humor is more the point, but the end of the story (no spoilers) is so damn sweet that the first time I read it, it made me choke up a little.

Another favorite genre, murder mysteries, could usually be summed up as "murdering people is bad."

But that's not what most people mean by "a moral to the story."  Generally, a story with a moral is one where the moral is the main point -- not something circumstantial to the setting or plot.

The moral is the reason the story was written.

I'm a little ambivalent about overt morals in stories.  I've seen it done exceptionally well; Thornton Wilder's amazing The Bridge of San Luis Rey is explicitly about a man trying to find out if things happen for a reason, or if the universe is simply chaotic.  His conclusion -- that either there is no reason, or else the mind of God is so subtle that we could never parse the reason -- is absolutely devastating in the context of the story.  The impact on me when I first read it, as an eleventh grader in a Modern American Literature class in high school, turned my whole worldview upside down.  In a lot of ways, that one novel was the first step in shaping the approach to life I now have, forty-odd years later.

If I can be excused for detouring into my favorite television show, Doctor Who, you can find there a number of examples of episodes where the moral gave the story incredible impact.  A couple that come to mind immediately are "Midnight," which looked at the ugly side of tribalism and the human need to team up against a perceived common enemy, and "Silence in the Library," with a subtext of the terrible necessity of self-sacrifice.

But if you want examples of bad moralistic stories, you don't have to look any further.  In the most recent incarnation of the Doctor, the episode "Orphan 55" pissed off just about everyone -- not only because of the rather silly cast of characters, but because at the end the Doctor delivers a monologue that amounts to, "Now, children, let me tell you how all this bad stuff happened because humans are idiots and didn't address climate change." 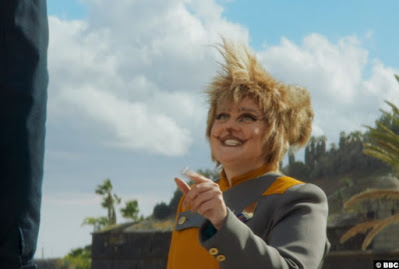 So what's the difference?

In my mind, it all has to do with subtlety -- and respect for the reader's (or watcher's) intelligence.  A well-done moral-based story has a deep complexity; it tells the story and then leaves us to see what the lesson was.  Haruki Murakami's brilliant and heartbreaking novel Colorless Tsukuru Tazaki is about what happens when people are in a lose-lose situation -- and that sometimes a terrible decision is still preferable when the other option is even worse.  But Murakami never comes out and says that explicitly.  He lets his characters tell their tales, and trusts that we'll figure it out.

Bad moral fiction -- often characterized as "preachy" -- doesn't give the reader credit for having the intelligence to get what's going on without being walloped over the head repeatedly by it.  One that immediately comes to mind is Ayn Rand's The Fountainhead, which is so explicitly about Big Government Is Bad and Individualism Is Good and Smart Creative People Need To Fight The Man that she might as well have written just that and saved herself a hundred thousand words.

I think what happens is that we authors have an idea what our stories mean, and we want to make sure the readers "get it."  The problem is, every reader is going to bring something different to the reading of a story, so what they "get" will differ from person to person.  If that weren't the case, why would there be any difference in our individual preferences?  But authors need to trust that our message (whatever it is) is clear enough to shine through without our needing to preach a sermon in a fictional setting.  Stories like "Orphan 55" don't work because they insult the watcher's intelligence.  "You're probably too dumb to figure out what we're getting at, here," they seem to say.  "So let me hold up a great big sign in front of your face to make sure you see it."

A lot of my own work has an underlying theme that I'm exploring using the characters and the plot, but I hope I don't fall into the trap of preachiness.  Two of my most explicitly moralistic tales, the short stories "Last Bus Stop" and "Loose Ends" (both available in my collection Sights, Signs, and Shadows), are about the fragility of life and how we should look after each other because we never know how long we have -- but I think in both cases the moral comes out of the characters' interactions organically, not because I jumped up and down and screamed it at you.

But it can be a fine line, sometimes.  Like I said, we all have different attitudes and backgrounds, so our relationship to the stories we read is bound to differ.  There are undoubtedly people who loved "Orphan 55" and The Fountainhead, so remember that all this is just my own opinion.

And maybe that's the overarching moral of this whole topic; that everyone is going to take away something different.  After all, if everyone hated explicitly moralistic stories, the Hallmark Channel would be out of business by next week.