Through a glass, darkly

I was chatting with my younger son a couple of days ago.  He's a professional scientific glassblower, so anything having to do with the properties, chemistry, or uses of glass is going to interest him automatically.  And this was how he ran into the name of Walter John Kilner.

My son asked me if I'd ever heard of him, which I hadn't, and he suggested I look into him as a possible topic for Skeptophilia.  What I found out was pretty interesting -- straddling that gap between "fascinating" and "crazy."

Kilner, who lived from 1847 to 1920, studied medicine, physics, and engineering at Cambridge University, eventually earning a master's degree as well as a doctorate in medicine.  He had a private medical practice as well as being a "medical electrician" -- then a brand-new field -- at St. Thomas Hospital in London.

So the man was certainly not lacking in brains.  But he veered off into an area that is fringe-y at best, and to this day we don't know if what he was seeing was real.

The basic idea is familiar to us today as the "aura," but what most people mean by that -- some sort of spiritual halo around humans (and supposedly, all living things) that conveniently can't be measured by any known technique -- is several shades more woo-woo than what Kilner meant.  He seems to have latched onto the idea of there being a kind of electromagnetic radiation given off by the human body that was outside the range of human vision, and which could potentially be used as a diagnostic tool if a device was developed that allowed us to see it.

In fact, there is invisible radiation coming from our bodies; it's infrared light, which is light that has a longer wavelength than red light.  (Nota bene: it took me some pondering to get past the misunderstanding that infrared and thermal radiation aren't the same thing.  Thermal radiation can be in any region of the spectrum -- think of the red light given off by a hot stove burner.  The wavelength of thermal radiation is dependent upon the temperature of the source.  Infrared, which can be emitted thermally, is defined by having wavelengths longer than that of visible light, regardless of how it's generated.)

More germane to Kilner and his goggles, although the human eye can't detect it, mosquitoes' eyes can (one of the ways they find us in the dark), and it can be sensed by the "loreal pits" of pit vipers that they use for finding prey at night, not to mention the infrared goggles used by the military, which convert long-wavelength infrared light to shorter wavelengths that we can see.

So there was at least some scientific basis for what he proposed, and remember that this would have been in the late nineteenth century, when the properties of electromagnetic radiation were still largely mysterious.  What Kilner proposed was that since light is altered when it passes through filters of any kind, there might be a filter that could take the electromagnetic radiation from the aura and convert it to visible light.

His approach was to take thin layers of alcohol-soluble dyes, most derived from coal tar, sandwiched between two sheets of clear glass.  He claimed he found one that worked -- a blue dye he called dicyanin -- but according to Kilner, it was difficult to produce, so he started fishing around for a substitute.

Along the way, he convinced a lot of people that his dicyanin filter allowed him to see the human aura, and generated a huge amount of enthusiasm.  People suggested other blue dyes -- cobalt-based ones, and other coal tar derivatives like pinacyanol -- but the results he obtained were equivocal at best.  Nobody was able to produce dicyanin again, or even figure out what its chemical composition was, which certainly made any skeptics raise an eyebrow.  But to the end of his life, Kilner swore that his dicyanin filter allowed him to see clearly an aura around his volunteers' naked bodies, despite an analysis by the British Medical Journal stating bluntly, "Dr. Kilner has failed to convince us that his 'aura' is more real than Macbeth's visionary dagger."

So what, if anything, did Kilner see?  The easiest answer is: we don't know.

The whole thing reminds me of Kirlian photography -- those familiar (and striking) photographs that result from placing a photographic plate on top of a high voltage source, then adding a flat object of some kind.  This produces a coronal discharge, a purely physical effect caused by the voltage creating temporary ionization of the air molecules.  Pretty much anything works; I've seen Kirlian photographs of coins.  But this doesn't stop the woo-woos from claiming that Kirlian photographs are capturing the aura, and giving it all sorts of spiritual and/or esoteric overtones. 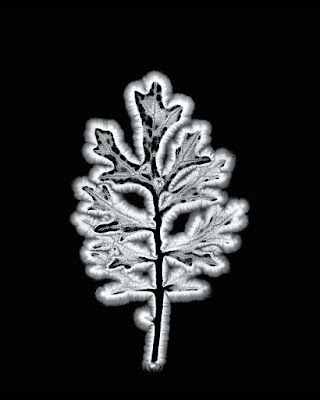 In the case of Kilner, though, the effect was never successfully replicated.  This hasn't stopped people from making "Kilner goggles" that you can still buy online, if you've got no better use for your money.  But as far as Kilner himself, he seems to have been entirely sincere -- i.e., not a charlatan or outright liar.  He pretty clearly believed he'd seen something that deserved an explanation.  Whether it was some kind of optical effect produced by his mysterious dicyanin, or a faint blur in the image that he then gave more significance than it deserved, we honestly don't know.  (This is reminiscent of the "canals of Mars," first described by astronomer Giovanni Schiaparelli, which were clearly an artifact of poor telescope quality -- when the optical equipment improved, the Martian canals mysteriously vanished, never to be seen again.)

Another possibility, though, was brought up by my wife; a lot of the dyes and solvents that Kilner used are neurotoxic.  It could be that what he was seeing was a visual disturbance caused by inhaling the fumes from nasty compounds like polycyclic aromatic hydrocarbons, common in the coal tar he was using to prepare his dyes.

The interesting thing is that Kilner completely dismissed the esoteric spin that auras were given during the last decade of his life, primarily by the Theosophists and Spiritualists who were skyrocketing in membership during the first decades of the twentieth century.  Kilner remained to the end a staunch believer in the scientific method, and that anything he'd seen had a purely physical origin that was explainable in terms of the properties of light and electromagnetism.

It's an interesting case.  The fact that in the hundred years since he died, no one's ever been able to replicate his findings, strongly supports the fact that he was simply wrong -- he'd seen something, but it had nothing to do with anything that could be called an aura.  Even so, he's an interesting example of someone who was clearly trying to do things the right way, but his own determination to prove his conjecture blinded him to the obvious conclusion.

Further stressing the truth of Leonardo da Vinci's statement that "We must doubt the certainty of everything that passes through our senses."