Under the ancient skies

I find it fascinating how long humans have been curious about the nature of the universe.  Our drive to understand the world and its workings certainly goes back a very long way.  Some of it can be explained purely pragmatically -- a commonly-cited example is the development of accurate sidereal calendars by the ancient Egyptians to get the timing right for the annual Nile floods, critical not only from a safety standpoint but because figuring out a way to manage all that water was essential for agriculture in what was then a rapidly-growing population.  But it goes far beyond that.  It seems like as far back as we have any kind of records at all, we've wanted to know what makes the cosmos tick.

A particularly fascinating example of this came my way via my friend, the brilliant writer Gil Miller, who seems to have an uncanny knack for finding stuff that (1) I will find really interesting, and (2) I haven't heard about before.  Yesterday he sent me a link from the site New Scientist about an archaeological find in Turkey that -- if the researchers' conclusions are borne out, will provide another example of how early we developed our compulsion to understand what was going on up there in the night skies.

The site is called Yazılıkaya, and it was built by the Hittites 3,200 years ago near their capital city of Ḫattuša.  (The nearest modern town is Boğazkale, in central Turkey.)  It has hundreds of images carved into the rock surfaces, and according to this new study, they represent not only solar, lunar, and sidereal calendars, they are a representation of their concept of the structure of the universe. 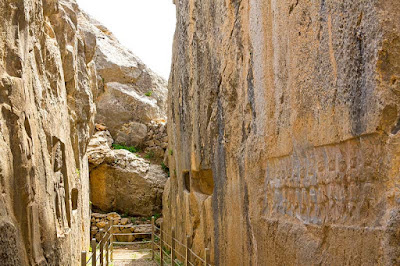 The shrine at Yazılıkaya

The current study was the product of a tremendous amount of work.  "There are many connotations with the names of the deities and the arrangements and groups, and so in retrospect it’s pretty easy to figure it out," said Eberhard Zangger, one of the researchers who investigated the site.  "But we worked on it for seven years...  [The Hittites] had a certain image of how creation happened.  They imagined that the world began in chaos, which became organized into three levels: the underworld, and then the earth on which we walk, and then the sky.  The second aspect of Hittite cosmology was a recurrent renewal of life – for instance, day following night, the dark moon turning into a full moon and winter becoming summer.  The calendar-like carvings reflect this cyclical view of nature."

Of course, back then, there was no particularly accurate way to measure stellar and planetary positions, and anything like a telescope was still two millennia in the future.  But even so, they did pretty damn well with what they had access to, especially given how long ago this was.  The Hittites controlled most of what is now modern Turkey from 1,700 to 1,100 B.C.E., at which point attacks from the Phrygians and Assyrians pretty much smashed the power structure and subsumed the culture.

From our modern knowledge of cosmology, the Big Bang and stellar evolution and astrophysics, their conclusions seem pretty rudimentary.  They, like most of the contemporaneous societies, put the whole thing in the hands of gods and sub-gods and so on, giving the whole thing a religious rather than scientific veneer.  "Obviously that makes sense, because that’s exactly what religion does," said archaeologist Efrosyni Boutsikas, of the University of Kent, who was not involved in the current research.  "It addresses universal concerns and the place of the people in the world."  She added that she's not 100% sold on the conclusions of Zangger and his colleagues, but that the site and others near it are deserving of further study.

I'm certainly not qualified to judge the quality of the research nor the legitimacy of the team's conclusions, but I am fascinated with how long we've been trying to figure out how everything works.  As Boutsikas said, religion is a common first-order approximation, and although in many cases it became solidified into a compulsory belief system that then became a hindrance to scientific advancement, it does represent our drive to reach beyond our day-to-day concerns and glimpse the mechanisms controlling not only the movements of things here on Earth, but of those unreachably distant points of light we see gliding through the night skies.  Awe-inspiring, isn't it, to think that our ancestors 3,200 years ago were looking at those ancient skies, and trying to make sense of it all -- just as we're still doing today.