As Randall Munroe (writer of the amazing comic xkcd) said, "Correlation does not imply causation, but it does waggle its eyebrows suggestively and gesture furtively while mouthing, 'Look over there.'"

I immediately thought of that quote when I bumped into a fascinating study that appeared in Ecology and Society last week, about grizzly bears.  Turns out that grizzlies, which are native to the northern continental United States, western Canada, and Alaska, have been spreading lately into territory in British Columbia where they hadn't been seen before, so some zoologists decided to do genetic testing and see where those bears were coming from, and what their relationship was to other bears in the area.

So they created bear bait from a fish slurry, which is as nasty as it sounds (as researcher Lauren Henson of the Raincoast Conservation Foundation put it, "it smells really really terrible to us, but is intriguing to bears").  They put the bait in the middle of a low tangle of barbed wire, which was intended not to hurt the bears but to catch and pull out bits of their fur.  The scientists then did genetic analysis on the bear fur thus collected.

What they found was that there are three distinct populations of grizzlies in British Columbia, which seem not to have a lot of overlap.  This by itself isn't unusual -- a lot of animals have isolated sub-populations and regional variation not only in genetics, but in color, size, even behaviors like vocalization patterns -- but where it got interested was discovered because the RCF's study involved cooperation with five indigenous groups, the Nuxalk, Haíɫzaqv, Kitasoo/Xai’xais, Gitga’at, and Wuikinuxv, primarily because a lot of the traps needed to be set on Native-owned land. 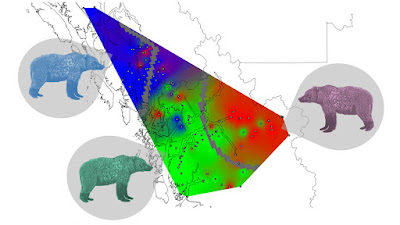 What's more perplexing still is that neither the grizzlies' range boundaries nor the regional language families coincide with any obvious geographical barriers -- large rivers, rugged terrain, areas with permanent snow cover or glacial ice.  Jenn Walkus, who coauthored the paper and is part of the Wuikinuxv Nation, wasn't that surprised.  "Growing up in a remote community called Rivers Inlet, I saw firsthand that humans and bears have a lot of the same needs in terms of space, food, and other resources," she said.  "It would make sense for them to settle in the same areas—ones with a steady supply of salmon, for instance.  This historic interrelatedness means Canada should manage key resources with both bears and people in mind."

While I don't doubt that she's right, it still is very weird to me that the settlement and dispersion patterns in humans and grizzlies would coincide like that, without there being a specific genetic barrier establishing and maintaining the boundaries.  It's hard to imagine why two human territories abutting each other, which have different indigenous ethnic background, would have any impact on where the bears are going.

Most of these kinds of regional variations in genetic makeup follow one of two patterns -- known to biologists as allopatry and sympatry.  The former is where there is a geographical barrier keeping the two populations apart; the ranges don't overlap, so the members of the two population don't mate because they don't meet.  My favorite example of this are the cute little tufty-eared Kaibab and Abert squirrels, which live (respectively) on the North and South Rim of the Grand Canyon. 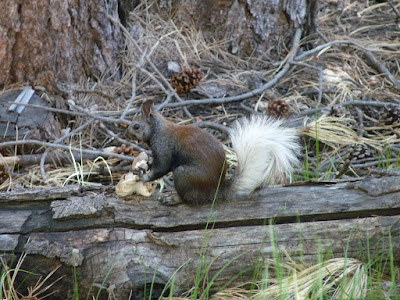 Sympatry can be a little harder to explain, because the ranges overlap -- so there has to be something other than geography keeping the populations separate.  One of the more curious examples of sympatry is the pink salmon of western North America, which has a strict two-year life cycle.  The eggs are laid in freshwater rivers, hatch, and the young make it out to the ocean, where they spend a year -- then in the second year, the adults come back to the river where they were spawned, reproduce, and die.  But what this means is that there is an odd-year and even-year population of pink salmon.  This year, the ones spawning are odd-year salmon, and their even-year cousins are out at sea (but will return to spawn themselves in 2022).  So even though they may inhabit the same range, the odd-year and even-year salmon never mate.

The grizzlies, though, show an odder pattern; it's called parapatry, where the ranges share a border but don't overlap.  True parapatry is rare, because something's got to keep the border relatively impermeable to migration.  While in some cases it's a geographical barrier of some kind, here there's no such easy explanation.  The grizzlies are maintaining genetically-distinct populations that show no obvious reason, but -- bizarrely -- coincide with the linguistically-distinct populations of people who inhabit the same area.

So here we have a really intriguing correlation that is definitely waggling its eyebrows suggestively, but admits of no evident causation.  I'm pretty certain there is one; it's hard to imagine this being chance.  But in the absence of an explanation, it's just another of those intriguing mysteries -- and fertile ground for zoologists and ethnologists to tackle in future studies.