Last week's Fiction Friday post -- about how (or if) we should continue to read writers whose work gives tacit acceptance to such repugnant views as racism or homophobia -- resulted in a few interesting responses and questions.

The first one had to do with how I as a writer approach other sorts of sensitive topics, especially sexuality and violence.  It did immediately make me wonder why here in the United States those are so often lumped together; we often talk about "sex and violence" in one breath, with regards especially to movie content.  I have no idea why something that can be an expression of pleasure and loving intimacy is somehow put in the same category as harming someone, but that's just one of a gazillion things I don't understand about my own culture.

But accepting for now that they're frequently thrown into the same "this is taboo" category... in my own work, I've written both sex scenes and violent scenes.  To me, both of these in fiction ramp up the emotional intensity, and I have no hesitation including them if it seems appropriate for the plot and characters.  However, I've also seen way too many examples of gratuitous content, where such scenes are simply pasted in to titillate the reader/watcher, and that to me is no more excusable than any other action that leaves you wondering what the point was.

As far as gratuitous violence, consider the amount of goriness in Kill Bill as compared to The Usual Suspects.  I've never taken a body count of either movie; suffice it to say it's high in both films.  But the amount of blood flying around doesn't even begin to compare.  The Usual Suspects, for all of the death and destruction, is a subtle movie, and leaves way more to the imagination than it shows you.  Kill Bill... isn't. 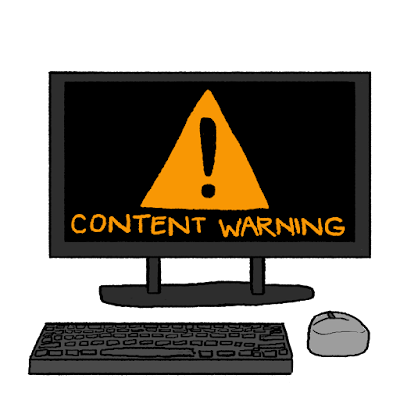 In my own work, I do sometimes include explicit sexuality or violence, but I hope none of it is unnecessary.  Also, there can be many reasons for including such content.  The sex scene in Sephirot is between the main character and a woman he will soon desperately regret getting friendly with; in Kári the Lucky, it's sweet and sad, between lovers who are headed for inevitable tragedy; in Whistling in the Dark, between two characters who have found love and healing in each other after suffering terrible emotional damage.  The same with violent scenes; in Gears, which might be the most overall-violent book I've written, one character gets her arm broken and is choked nearly to death, another is killed by being thrown against a wall, another third shot in the middle of the chest, another crushed by a (psychically-generated) landslide, yet another murdered by a deliberately-loosed falling piece of masonry.  Even so, the violence isn't the point of the story.  If anything, the point of Gears is that goodness and courage and steadfastness will always win over greed and deception and ruthlessness.  The violence is there not only to advance the plot, but to set in stark relief how a choice to be brave and moral isn't without risks, but it's still what we should all aspire to.

Another question generated by last Friday's post had to do with "content warnings" or "trigger warnings."  Should they be present on a book's back cover?  A related question -- are there topics that are over the line for me, that are enough of an emotional trigger for me that I can't write them?

I've never included a content warning for my own work, although I did one time mention to someone I thought might be sensitive to it that Sephirot has a fairly explicit sex scene (as it turned out, the reader in question had no problem with it).  In my work, pretty much What You See Is What You Get; the back cover blurb will give you a pretty good idea of the content of the story, and readers can make the decision whether or not to read a particular book based on that, without needing a specific content warning.  I mostly write speculative/paranormal fiction, so you can expect lots of spooky atmosphere, but (I hope) nothing that really offends.

However, since we're talking about the capacity for offending readers, it must be mentioned that some of my characters have the tendency to swear a lot.  This is partly because I swear a lot.  I try to make it appropriate for the scene and character, but Be Thou Forewarned.

Be Thou Even More Forewarned if we ever sit down and have a beer together.

As an amusing aside -- I recall being at a book signing event, and a rather prim-looking woman coming up to me and saying she'd really enjoyed Lock & Key, but "the character of the Librarian sure does use the f-bomb a lot."

I responded, completely deadpan, "I know!  I tried talking to him about it, but he told me to fuck off."

Well, at least I thought it was funny.

In all seriousness, the problem is that different people have different sensitive points.  I gave up on the book The Third Eye (by T. Lobsang Rampa), and walked out of the movie Brazil, because of torture scenes; despite my fascination with Scottish history, I refuse to watch Braveheart because I know damn good and well what happens to William Wallace at the end.  However, I know people who had no problem with any of those -- the scenes in question might have been unpleasant, but not enough to cause them serious upset.

In my own work, there are three kinds of scenes that I can't stomach writing; rape, pedophilia, and animal abuse.  I just can't do it.  As far as the last-mentioned, I found out from another reader that I'm not the only one who can't deal with reading about harming animals even in a fictional setting.  In Kill Switch, the main character's dog, Baxter, is his constant companion.  I was stopped on the street by someone in my village who told me he was reading Kill Switch, and so far was enjoying it -- but then a frown crossed his face, and he said, "I know people are gonna die.  I'm okay with that.  It's a thriller, after all."  He brought his face near mine, and said in an intense voice, "But if you kill Baxter, I will never speak to you again."

The scene that for me danced the closest to the edge of that line is, once again, in my novel Sephirot (yeah, it's a pretty emotionally-fraught story, in case you hadn't already figured that out).  A character is the recipient of a brutal bare-back whipping -- it's absolutely necessary for the plot, but it was right at the boundary of "this is too awful for me to write about."

I guess everyone has their limits -- and we as writers need to be cognizant of that.

Anyhow, there are a few responses to the questions and comments generated by last Friday's post.  I love hearing what people think, and what thoughts my posts bring up for readers, so keep those cards and letters comin'.  As for me, I need to get to my work-in-progress, and see what diabolical plot twists I can think of for this novel.  As Stephen King put it, "In a good story, the author gets the readers to love the characters -- then releases the monsters."

So now I'm off to give the monsters some exercise.