For today's Fiction Friday, I'm asking a question not because I'm trying to lead you in any particular direction, but because I honestly am not sure about the answer myself.

How should we as readers deal with fiction in which there is evidence of reprehensible attitudes like racism, sexism, and homophobia?

I'm not referring here to stories where the bigotry is depicted in order to show how bad bigotry is; the viciously racist characters in the Doctor Who episode "Rosa" are there to illustrate in no uncertain terms what it was like for People of Color in the Civil Rights era American South.  Nor, on the other end of the spectrum, am I really considering stories where the bigotry is presented in a positive light, and is kind of the point.  (A particularly egregious example is the H. P. Lovecraft short story "The White Ape," which is repellent from the get-go.)

I'm more interested in the gray area; stories where there is evidence of a bigoted attitude, but the bigotry doesn't form an essential part of the story.  The topic comes up because I've been re-reading the murder mysteries written in the 1930s by Dorothy Sayers, whose name is right up there with Agatha Christie and Erle Stanley Gardner and Ngaio Marsh and the other greats of classic mystery literature.

The bigotry in Sayers's work doesn't smack you over the head.  The main characters are (very) upper-crust British nobility in the early twentieth century, so there's no doubt the attitudes she portrays were prevalent at the time.  And there are some things she does pretty well, even to modern eyes.  Her detective, Lord Peter Wimsey, clearly treats his wife Harriet Vane as a complete equal, and in fact in the book where they finally marry (Busman's Honeymoon) Harriet asks him if he will expect her to give up her career as a novelist, and he reacts with surprise that she would even consider such a thing.

The racism, however, is there, and in more than one place.  There's one book (Unnatural Death) where part of the twist of the story is that in the family tree of the victim, one of the great-uncles had been a sketchy sort, had gone to the West Indies, and married a Black woman; their children and grandchildren remained in that culture, accepting their place as People of Color.

So far, so good.  But when one of their descendants returns to England, he's very much looked at as an aberration.  The Englishman who was the progenitor of that branch of the family is more than once referred to as having done something immoral and offensive by engaging in an interracial marriage; the great-great grandson who shows up in white English society isn't really portrayed negatively, but there's no doubt he's played for laughs (starting with the fact that his name is Reverend Hallelujah Dawson).

Even worse is her repeated low-level anti-Semitism.  There are Jewish characters here and there, and one and all they are the "of course he's money-conscious, he's Jewish" stereotype.  In Whose Body?, Sayers kind of goes out of her way to present the character of Reuben Levy as a nice and honorable guy, but there's something about it that reeks of, "I'm not racist, I have a Black friend."

It boils down to how much slack we should give to authors who were "people of their times," whose attitudes simply reflect the majority opinion of the society they lived in.  In Sayers's early-twentieth-century wealthy British culture, there was a tacit assumption of white British superiority; the racism is almost by default.  The characters don't set out to demean or mistreat people of other races, it's more that the message is, "Of course we're superior, but that doesn't mean we'll be nasty to you as long as you know your place."

Christie herself is not a lot better.  One of her most famous novels (and the first of hers I ever read) is And Then There Were None, which has to be one of the most perfectly-crafted mysteries ever written.  But the original title of the book was a different line from the nursery rhyme that is the unifying theme of the entire plot -- Ten Little Indians.  Worse still, when it was first released, it went by an earlier and even more offensive version of the rhyme -- Ten Little Niggers.

At least she had the good sense to change it.  But that doesn't alter the pervasive white wealthy British superiority that runs through all her work. 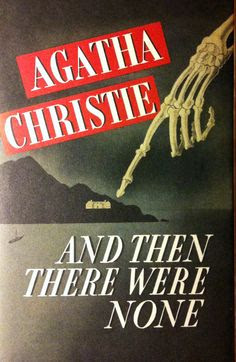 I've found myself wincing more than once over all this, and I'm not honestly sure how much of a bye we can give those writers of an earlier time for attitudes that were all too common back then, but which we (or at least most of us) consider morally repellent now.  Does the implicit racism in Sayers and Christie, and the more overt racism in Lovecraft, alter our ability to read work of theirs that have no racist aspects at all?  More recently, what about Orson Scott Card's homophobia?  His bigotry came out in interviews, not really in his work; I don't recall any trace of it in (for example) Ender's Game.  What about worse things still?  Since reading about her alleged role in her husband's sexual abuse of their daughter, I can't read Marion Zimmer Bradley -- but how much of that is because I never particularly liked her in the first place?  Isn't it a bit hypocritical to give authors' bad behavior a pass solely because we don't want to give up reading them?

I wish I had some black-and-white answer for this.  I'm certainly not trying to excuse anyone for morally repulsive stances, but it seems to me that considering only overtly racist writing such as "The White Ape" ignores the fact that there's way more gray area here than you might think at first.

I'd love to hear how you approach this as a reader.  I can see having students read and study books with problematic attitudes, because (1) that's how they learn that those attitudes exist, and (2) it gives a skilled teacher an opportunity to analyze those beliefs and demonstrate how horrible they actually were.  But what about reading solely for pleasure?  I kind of loathe the words "woke" and "politically correct," but don't they embody the attitude of someone who refuses to read anything that doesn't reflect our current cultural standards?

Even if those standards are laudable?

I honestly don't know the answer to that.  I'm not intending on giving up reading, and for the most part enjoying, Sayers, Christie, and the others.  I can't deny that even Lovecraft -- at least his stories where race doesn't come into it, even subtly and implicitly ("At the Mountains of Madness" comes to mind) -- have been major positive influences on my own work.

What do you think?  Is there merit to the "(s)he was a person of the times" argument, or are we giving tacit acceptance of repulsive attitudes just because the work is old -- or because we like it otherwise?

**********************************************
This week's Skeptophilia book-of-the-week is by an author we've seen here before: the incomparable Jenny Lawson, whose Twitter @TheBloggess is an absolute must-follow.  She blogs and writes on a variety of topics, and a lot of it is screamingly funny, but some of her best writing is her heartfelt discussion of her various physical and mental issues, the latter of which include depression and crippling anxiety.
Regular readers know I've struggled with these two awful conditions my entire life, and right now they're manageable (instead of completely controlling me 24/7 like they used to do).  Still, they wax and wane, for no particularly obvious reason, and I've come to realize that I can try to minimize their effect but I'll never be totally free of them.
Lawson's new book, Broken (In the Best Possible Way) is very much in the spirit of her first two, Let's Pretend This Never Happened and Furiously Happy.  Poignant and hysterically funny, she can have you laughing and crying on the same page.  Sometimes in the same damn paragraph.  It's wonderful stuff, and if you or someone you love suffers from anxiety or depression or both, read this book.  Seeing someone approaching these debilitating conditions with such intelligence and wit is heartening, not least because it says loud and clear: we are not alone.
[Note: if you purchase this book using the image/link below, part of the proceeds goes to support Skeptophilia!]