I read the latest report from the Intergovernmental Panel on Climate Change (IPCC) that came out on Monday with tears of frustration and anger in my eyes.

Drawing on the data and conclusions of 14,000 different studies, the IPCC's report was about as clear as you could get.  The 1.1 C increase in the average global temperature we've already seen, it says, is "unequivocally caused by human activities" and is predicted to reach 1.5 C by 2030.  As far as the insane weather we've had in the past two years -- it's due to anthropogenic carbon dioxide from the burning of fossil fuels.  Full stop.

The effects have included:

The report was called "a clarion call... that climate change is spiraling out of control."  U.N. Secretary-General António Guterres described the report as a "code red for humanity."  "The alarm bells are deafening," Guterres said in a statement.  "This report must sound a death knell for coal and fossil fuels, before they destroy our planet."  U.S. President Joe Biden said, "We can’t wait to tackle the climate crisis.  The signs are unmistakable.  The science is undeniable.  And the cost of inaction keeps mounting."  British Prime Minister Boris Johnson concurred, saying the report was "a wake-up call for the world to take action now, before we meet in Glasgow."
This is the point where my grief began to turn into rage.
Climate scientists have been warning about this in no uncertain terms for over a century.  Don't believe me?  Take a look at this newspaper clipping from New Zealand... and check the date: 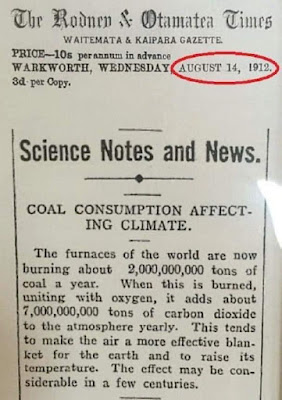 It goes back even further than that, though.  In 1896, Swedish chemist Svante Arrhenius wrote:

Others tried to bring the scientific consensus to public awareness.  James Burke's prescient documentary After the Warming presented the case in terrifying terms in 1989.   Al Gore's 1992 book Earth in the Balance and his 2006 documentary An Inconvenient Truth did the same.

The result by politicians was: silence.

That, or outright scoffing by anti-science knuckle-draggers like James Inhofe, Dana Rohrabacher, and Lamar Smith, aided and abetted by Rush Limbaugh, Ann Coulter, Sean Hannity, and Fox News in general.  Climate change is a hoax, they said.  Any warmup we're seeing is purely natural -- "the Earth has been warm before."  Inhofe, in fact, demonstrated not only his lack of comprehension of climate science but the fact that he evidently failed ninth grade Earth Science by bringing a snowball onto the floor of Congress and using that as proof that climate change wasn't happening.  (Stephen Colbert's response to this stunt was, "It's cold out, so there's no such thing as global warming.  And in other good news, I just had dinner so there's no such thing as world hunger.")

Oh, but things are gonna be different this time, we're told.  "You’ve got the politicians being squeezed by the science, which is confirming a sense of alarm and fear, you’ve got the science now in the public mind," said Tom Burke, co-founder of E3G, a European climate think tank.  "You’ve got capital markets saying this is beginning to really threaten the future value of our investments.  So you’ve got enormous pressure building up on the politicians."

But the signs are already there that this pressure will, yet again, come to nothing.

The 26th UN Climate Change Conference of the Parties (COP26) is scheduled for November, in Glasgow, Scotland.  Already the word is that India and China plan on "holding out for coal" -- i.e., refusing to play ball unless they can keep international law out of their coal-burning practices.  At an earlier conference, only thirteen countries in the G20 agreed to the necessity of zero-net-carbon energy production.  It's looking all too likely that -- once again -- any possibility of addressing climate change will get stalled by squabbles over short-term expediency.

The worst part is that there are climate scientists who are saying that we've basically missed our window for mitigating the warm-up.  "You’ve been telling us for over three decades of the dangers of allowing the planet to warm," UN Environment Program Executive Director Inger Andersen said to scientists Monday, after the release of the IPCC report.  "The world heard, but it didn’t listen.  The world heard, but it didn’t act strongly enough.  As a result, climate change is a problem that is here, now.  Nobody’s safe, and it’s getting worse faster."

It all brings to mind the Greek myth of Cassandra, who was blessed by the gods with the power of foresight but cursed to never be believed.  The Cassandras of the last fifty years of climate science have been screaming themselves hoarse that for fuck's sake, we need to do something, and the response has been one of the following:

The scientists responded with outrage, especially to the last one; in order to make that argument, they said, you have to compare the cost of phasing out fossil fuels with the cost of doing nothing, and the latter is looking catastrophic.  All the anger accomplished little, largely because of the stranglehold the fossil fuels industry has on the governments of the industrialized world.  Who cares about a couple of degrees' warm-up over the next twenty years, they said -- as long as it's not affecting our financial bottom line now.
So the people who could have acted sat on their hands.  Despite -- as James Burke put it back in 1989 -- the fact that "we don't think twice about insuring our lives, our cars, and our property against far less likely occurrences."  And it's looking very much like the Glasgow Conference in November is going to result in exactly the same thing.
I'm naturally an optimistic person.  My general assumption is that most people are doing the best they can, and that most of the time, things work out.  But I'm finding it hard to dredge up any optimism here.  If the past forty years of dire warnings and (at least) twenty years of one climate-related disaster after another haven't made the powers-that-be say, "Look, we've got to address this," then I have no particular confidence that the new IPCC report will fare any better.
So here we sit, in a world that's facing unprecedented heat waves, wildfires, droughts, floods, storms, and sea level rise, and those amongst us who actually understand climate are lamenting the fact that we might have been able to prevent all this if we'd just listened to the damn scientists when they first started issuing warnings.  James Burke ended After the Warming with a bit of dark humor that, sadly, is still applicable to today, and seems a fitting way to end this piece as well.
A man falls off the roof of a thirty-story building, and as he's falling, he passes the window of the fifteenth floor, and someone calls out to him to ask how he's doing.  The man shrugs and says, "So far, so good."
**********************************************
This week's Skeptophilia book-of-the-week is by an author we've seen here before: the incomparable Jenny Lawson, whose Twitter @TheBloggess is an absolute must-follow.  She blogs and writes on a variety of topics, and a lot of it is screamingly funny, but some of her best writing is her heartfelt discussion of her various physical and mental issues, the latter of which include depression and crippling anxiety.
Regular readers know I've struggled with these two awful conditions my entire life, and right now they're manageable (instead of completely controlling me 24/7 like they used to do).  Still, they wax and wane, for no particularly obvious reason, and I've come to realize that I can try to minimize their effect but I'll never be totally free of them.
Lawson's new book, Broken (In the Best Possible Way) is very much in the spirit of her first two, Let's Pretend This Never Happened and Furiously Happy.  Poignant and hysterically funny, she can have you laughing and crying on the same page.  Sometimes in the same damn paragraph.  It's wonderful stuff, and if you or someone you love suffers from anxiety or depression or both, read this book.  Seeing someone approaching these debilitating conditions with such intelligence and wit is heartening, not least because it says loud and clear: we are not alone.
[Note: if you purchase this book using the image/link below, part of the proceeds goes to support Skeptophilia!]