A writer friend of mine threw out a question on social media that I thought was fascinating: if you had a time machine and could visit (safely) any time in the past, when would you choose?

There are so many to choose from -- at least, if safety were guaranteed -- it's hard to pick one.  If you add in pre-Homo-sapiens times, even more so.  There are the ones that would be fascinating just from their spectacular nature.  Think of watching, from a distance, the Chicxulub Meteorite striking the Earth, ending the Cretaceous Period and the hegemony of the dinosaurs in one fell swoop.  Or how about the eruption of the Siberian Traps two hundred million years earlier -- thought to be the biggest series volcanic eruptions ever, releasing four million cubic kilometers of lava -- one of the events that kicked off the Permian-Triassic extinction, the largest mass extinction known.

Even the eruption of Mount Vesuvius in 79 C.E. would have been something to see.

Then there are the ones of historical import.  Imagine witnessing the Mayan, Inca, or Aztec civilizations at their heights.  Consider visiting the Library of Alexandria before it was destroyed, and getting a chance to browse through works of literature for which we have no traces left.  So many classic works didn't survive -- we have only seven of the 120 plays written by Sophocles, eighteen of the 92 by Euripides, seven out of the eighty-odd written by Aeschylus -- and think of how many other amazing writers had their entire body of work obliterated, and whose names we might not even know.

So choosing only one would be fiendishly difficult.  But for me, there's one that jumps to mind whenever I consider the question.  I would love to visit Britain during the "Dark Ages," some time between the withdrawal of the Romans from the island in 410 C.E. and the consolidation of Anglo-Saxon rule starting with Penda of Mercia in the early part of the seventh century.

My main reason for choosing this time period is that it's such a historical mystery.  We have a number of accounts of events from that time, most famously the Arthurian legend cycle, but given how few records actually date from that period -- most were written centuries afterward, and based upon sources of dubious reliability -- no one knows where the myth ends and the history begins.

For example, consider the research I found out through my friend and frequent contributor to Skeptophilia, the author Gil Miller, indicating that one of the sites associated with Arthur dates from much much earlier.

The site in question is on the River Wye in rural Hertfordshire, and is nicknamed "Arthur's Stone."  Depending on who you talk to, the Stone is said to be the place where Arthur defeated a giant, a place where he knelt to pray before going to battle against the Saxons, or a monument marking where he's buried.  Whether the Stone actually had anything to do with Arthur himself (presuming he even existed) is a matter of debate, but what this research has shown is that Arthur's Stone predates Arthur himself...

This site is Neolithic in origin, and in fact was built before Stonehenge, which is itself incorrectly associated with Druids and the Celts.  In fact, neither of them was around at the time; that area of Britain was inhabited at that point by the Western Hunter-Gatherer culture (originally of Aegean or Anatolian origin) and the north African and Iberian Bell Beaker People, so named because of the characteristic shape of their clay drinking vessels.

So even the sites that are associated with King Arthur have no certain historical connection.  And as far as Arthur himself, we don't even know for sure who he was.  Various theories include his being one of a number of different Welsh chieftains, a half-Celtic, half-Roman military man who stayed behind when Rome made their official withdrawal, or possibly just someone who had a sword bunged at him by a watery tart. 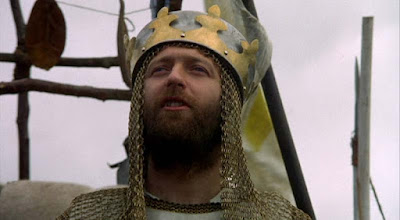 There's no doubt that a good many of the legends that have been spun about Arthur and the Round Table and Camelot and the Holy Grail are complete fairy stories, but once again, what's impossible at this point is to tease out which bits (if any) are actually historical, all the way down to which of the various characters even existed.  I mean, I have my doubts about the Lady of the Lake and the Green Knight and even the Killer Rabbit of Caer Bannog, but what about Guinevere and Galahad and Lancelot and the rest?  Do any of these even have a glancing connection with real historical people?

I would love to know the answer to that.

So those are my musings for this morning.  Going back and witnessing the Battle of Badon Hill.  I still would have to think long and hard to choose between that and the Library of Alexandria -- but I have the feeling I'd stick with Arthur, especially since I doubt the people who ran the Library of Alexandria would have been okay with my grabbing a few dozen manuscripts to take back with me.