A pair of new studies last week in The Journal of Neuroscience analyzed the connections between two phenomena related to music listening that I know all too well -- our ability to replay music in our imaginations, and our capacity for anticipating what the next notes will be when we hear the first part of a melody.

The first, which I seem to excel at, is a bit of a mixed blessing.  It's my one and only superpower -- I can essentially remember tunes forever.  In my ten years as flutist in a Celtic dance band, I had just about every tune in our repertoire memorized.  I'm lousy at connecting the names to the tunes, though; so when my bandmate would say, "Next, let's play 'Drummond Castle,'" and I responded, sotto voce, "How the hell does 'Drummond Castle' go?" she'd say, "It's the one that goes, 'deedly-dum, da-deedly-dum, dum-da-deedly-deedly-deedly,'" then I'd say, "Oh, of course," and proceed to play it -- in the correct key. 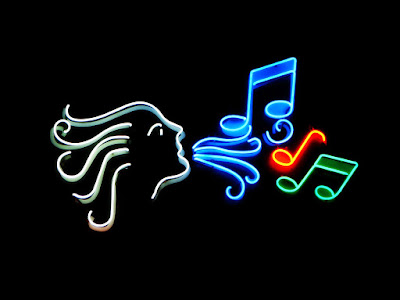 [Image licensed under the Creative Commons © Nevit Dilmen, Music 01754, CC BY-SA 3.0]
The most striking example of this was a tune that I remembered literally for decades without hearing it once during that time.  When I was about 25 I took a Balkan dance class, and there was one tune I especially liked.  I intended to ask the instructor what the name of it was, but forgot (indicating that my memory in other respects isn't so great).  In those pre-internet days, searching for it was damn near impossible, so I forgot about it... sort of.  Twenty years went by, and my wife and I went to a nine-day music camp in the California redwoods, and I made friends with an awesome accordionist and all-around nice guy named Simo Tesla.  One day, Simo was noodling around on his instrument, and instantaneously, I said, "That's my tune!"  There was no doubt in my mind; this was the same tune I'd heard, a couple of times, two decades earlier.

If you're curious, this is the tune, which is called "Bojerka":

The downside, of course, is that because I never forget a tune, I can't forget one even if I want to.  I'm plagued by what are called earworms -- songs that get stuck in your head, sometimes for days at a time.  There are a few songs that are such bad earworms that if they come on the radio, I'll immediately change the channel, because even a few notes are enough to imbed the tune into my brain.  (Unfortunately, sometimes just hearing the name is enough.)

And no, I'm not going to give examples, because then I'll spend the rest of the day humming "Benny and the Jets," and heaven knows I don't want to... um...

The second bit -- imagining what comes next in a piece of music -- also has a positive and a negative side.  The negative bit is that it is intensely frustrating when I'm listening to a song and it gets cut off, so that I don't get to hear the resolution.  The importance of resolving a musical phrase was demonstrated by my college choral director, Dr. Tiboris, who to illustrate the concept of harmonic resolution played on the piano, "Hark, the herald angels sing, glory to the newborn..."  And stopped.

Three or four of us -- myself included -- sang out "KING!" because we couldn't stand to leave the phrase unresolved.

The positive side, though, happens when I listen to a piece of music for the first time, and it resolves -- but not in the way I expected.  That thwarting of expectations is part of the excitement of music, and when done right, can send a shiver up my spine.  One of my favorite moments in classical music is a point where you think you know what's going to happen, and... the music explodes in a completely different direction.  It occurs in the pair of pieces "Quoniam Tu Solus Sanctus" and "Cum Sancto Spiritu" from J. S. Bach's Mass in B Minor.  (If you don't have time to listen to the whole thing, go to about 5:45 and listen for the moment you get lifted bodily off the ground.)

All of which is a long-winded way to get around to last week's papers, which look at both the phenomena of imagining music and of anticipating what will happen next, through the use of an EEG to determine what the brain is actually doing.  What the researchers found is that when you are imagining a piece of music, your brain is responding in exactly the same way as it does when you're actually listening to the piece.  When there's a silent bit in the music, your brain is functionally imaging what's coming next -- whether it's real or imagined.

What was more interesting is the brain's response to the notes themselves.  Imagined notes generate a negative change in voltage in the relevant neurons; real notes generate a positive voltage change.  This may be why when our expectations and the reality of what phrase comes next match up, we can often tune it out completely -- the two voltage changes, in essence, cancel each other out.  But when there's a mismatch, it jolts our brains into awareness -- just like what happens at the end of "Quoniam Tu Solus Sanctus."

I find the whole thing fascinating, as it ties together music and neuroscience, two subjects I love.  I've often wondered about why some pieces resonate with me and others don't; why, for example, I love Stravinsky's music and dislike Brahms.  These studies don't answer that question, of course, but they do get at our ability both to remember (and replay) music in our minds, and also why we have such a strong response when music does something contrary to our expectations.

But I think I'll wind this up, and just add one more musical track that is pure fun -- the "Polka" from Shostakovich's The Age of Gold.  This is Shostakovich letting loose with some loony light-heartedness, and I defy anyone to anticipate what this piece is gonna do next.  Enjoy!

**********************************************
Author and biochemist Camilla Pang was diagnosed with autism spectrum disorder at age eight, and spent most of her childhood baffled by the complexities and subtleties of human interactions.  She once asked her mother if there was an instruction manual on being human that she could read to make it easier.
Her mom said no, there was no instruction manual.
So years later, Pang recalled the incident and decided to write one.
The result, Explaining Humans: What Science Can Teach Us About Life, Love, and Relationships, is the best analysis of human behavior from a biological perspective since Desmond Morris's classic The Naked Ape.  If you're like me, you'll read Pang's book with a stunned smile on your face -- as she navigates through common, everyday behaviors we all engage in, but few of us stop to think about.
If you're interested in behavior or biology or simply agree with the Greek maxim "gnothi seauton" ("know yourself"), you need to put this book on your reading list.  It's absolutely outstanding.
[Note:  if you purchase this book using the image/link below, part of the proceeds goes to support Skeptophilia!]