The most insidious thing about this claim is that it delegitimizes queer identification, making it sound no more worthy of serious consideration than a teenager desperate to buy into the latest fashion trend.  It also ignores the actual explanation -- that there were just as many LGBTQ+ people around decades and centuries ago, but if there's a significant chance you will be harmed, jailed, discriminated against, ridiculed, or killed if you admit to who you are publicly, you have a pretty powerful incentive not to tell anyone.  I can vouch for that in my own case; I not only had the threat of what could happen in the locker room hanging over my head if I'd have admitted I was bisexual when I realized it (age fifteen or so), but the added filigree that my religious instructors had told us in no uncertain terms that any kind of sex outside of the traditional male + female marriage was a mortal sin that would result in eternal hellfire.

The reason this comes up is because of two studies I ran into in the last couple of days.  The first, in The Sociological Review, is called "ROGD is a Scientific-sounding Veneer for Unsubstantiated Anti-trans View: A Peer-reviewed Analysis," by Florence Ashley of the University of Toronto.  ROGD is "rapid-onset gender dysphoria," and is the same thing I described above, not only in pretty packaging but with a nice psychobabble bow on top; the claim boils down to the choice of a trans person to come out being driven by "social contagion," and therefore being a variety of mental illness.  The whole thing hinges on the "suddenness" aspect of it, as if a person saying, "By the way, I'm trans" one day means that they'd just figured it out that that day.  You'd think anyone with even a modicum of logical faculties would realize that one doesn't imply the other.  I came out publicly as queer three years ago, but believe me, it was not a new realization for me personally.  I'd known for decades.  Society being what it is, it just took me that long to have to courage to say so.

"Rapid-onset gender dysphoria" (ROGD) first appeared in 2016 on anti-trans websites as part of recruitment material for a study on an alleged epidemic of youth coming out as trans "out of the blue" due to social contagion and mental illness.  Since then, the concept of ROGD has spread like wildfire and become a mainstay of anti-trans arguments for restricting access to transition-related care...  [It is] evident that ROGD is not grounded in evidence but assumptions.  Reports by parents of their youth’s declining mental health and degrading familial relationships after coming out are best explained by the fact that the study recruited from highly transantagonistic websites.  Quite naturally, trans youth fare worse when their gender identity isn’t supported by their parents.  Other claims associated with ROGD can similarly be explained using what we already know about trans youth and offer no evidence for the claim that people are ‘becoming trans’ because of social contagion or mental illness.

The second, quite unrelated, paper was in The European Journal of Archaeology and describes a thousand-year-old burial in southern Finland that strongly suggests the individual buried there was androgynous.  Genetic analysis of the bones showed that they'd belonged to someone with Klinefelter Syndrome, a disorder involving a chromosomally-male person having an extra X chromosome (i.e., XXY instead of XY).  This results in someone who is basically male but has some female physical features -- most often, the development of breasts.
Nondisjunction disorders like Klinefelter Syndrome are not uncommon, and finding a bone from someone with an odd number of chromosome is hardly surprising.  But what made this paper stand out to me -- and what it has to do with the previous one -- is that the individual in the grave in Finland was buried with honors, and with accoutrements both of males and females.  There was jewelry and clothing traditionally associated with women, but two sword-hilts that are typically found in (male) warrior-burials. 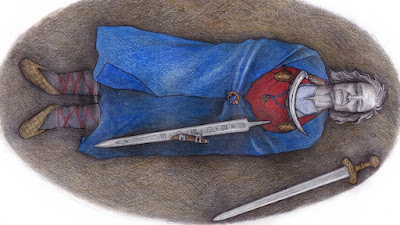 Artist's depiction of the burial at Suontaka [Image from Moilanen et al., July 2021]
So apparently, not only was the person in the grave buried with honors, (s)he/they were openly androgynous -- and that androgyny was accepted by the community to the extent that (s)he/they were buried with grave goods representing both gender roles.
"This burial [at Suontaka] has an unusual and strong mixture of feminine and masculine symbolism, and this might indicate that the individual was not strictly associated with either gender but instead with something else," said study leader Ulla Moilanen of  the University of Turku.  "Based on these analyses, we suggest... [that] the Suontaka grave possibly belonged to an individual with sex-chromosomal aneuploidy XXY.  The overall context of the grave indicates that it was a respected person whose gender identity may well have been non-binary."
If Moilanen and her group are correct in their conclusions, it gives us the sobering message that people in tenth-century C.E. Finland were doing better than we are at accepting that sexual identification and orientation aren't simple and binary. 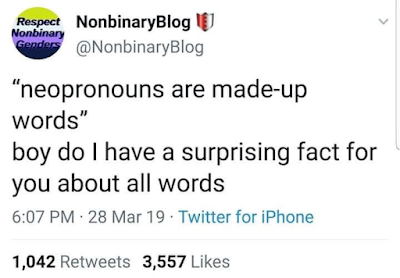 What it comes back to for me is the astonishing gall it takes to tell someone, "No, you don't know your own sexuality; here, let me explain it to you."  Why it's apparently such a stressor for some people when a friend says, "I'm now identifying as ____, this is my new name," I have no idea, especially given that nobody seems to have the least trouble switching from "Miss" to "Mrs." and calling a newly-married woman by her husband's last name when the couple makes that choice.  The harm done to people from telling them, "Who you are is wrong/a phase/a plea for attention/sinful" is incalculable; it's no wonder that the suicide rate amongst LGBTQ+ is three times higher than it is for cis/het people.
All of which, you'd think, would be a tremendous impetus for outlawing the horrors of "conversion therapy" and "ex-gay ministries" worldwide.  But no.
More exasperating still, now there's apparently evidence that people in Finland a thousand years ago had figured this whole thing out better than we have, making it even more crystal-clear why so many of us sound exhausted when we ask, "why are we still having to fight these battles?"
Of course, as tired as we are of saying the same thing over and over, we certainly can't stop now.  We have made some headway; my guess is that if I were a teenager now, I'd have few compunctions about admitting I'm queer, and that's even considering how ridiculously shy I am.  Contrast that to when I actually was a teenager back in the 1970s, and there was not a single out LGBTQ+ in my entire graduating class (although several of us came out later; in my case, much later).
And allow me to state, if I hadn't already made the point stridently enough: none of us was "turned queer" between graduation and coming out.  We just finally made our way into a context where we were less likely to be ridiculed, discriminated against, or beaten up for admitting who we are.
I'll end with something else I found online, that sums up the whole issue nicely -- although it does highlight how far we still have to go, despite the reality checks we're seeing increasingly often in scientific research.  Even with all that, I firmly believe it: 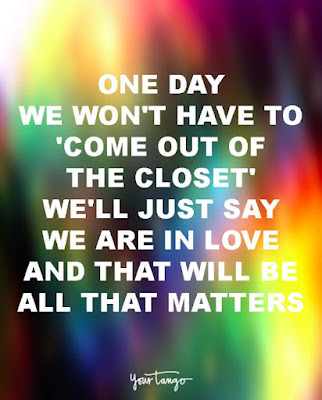