I've suspected for a while that the FBI is keeping a file on me based upon my Google search history.

This, I suspect, is something that plagues a lot of writers, but it's really hit home apropos of my murder mystery series, The Snowe Agency Mysteries, the research for which has resulted in some searches that would look seriously sketchy to anyone who didn't know I'm a writer.  These have included:
To anyone would-be Sherlocks out there: allow me to assure you that I have never killed, nor am I planning on killing, anyone. 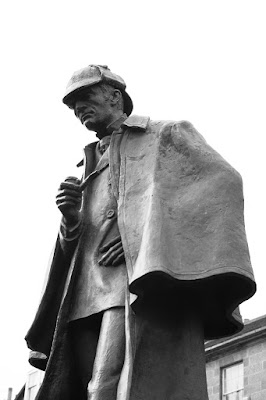 [Image licensed under the Creative Commons Siddharthkrish at English Wikipedia., Statue of Sherlock Holmes in Edinburgh, CC BY-SA 3.0]
Writing takes you down some interesting rabbit holes, and I'm not just talking about writing mysteries.  One of the reasons I love writing fiction is that I learn so much in the process -- it gives me a chance to stretch my own brain a little.  Here are a few things I had to research for books I've written:
And that's just scratching the surface.

I was chatting with a friend and fellow author a couple of days ago, and commented that fiction should open up new worlds, that if my readers are the same when they close the book as they were when they opened it, I've failed as a writer.  However, writing also opens up new worlds for the writer, lets us explore topics we'd otherwise never look into.  (It's all too easy to get lost in research -- to intend to sit down and write, and suddenly three hours have gone by, and all you've done is jump from one abstruse website to another, as my friend and writing partner Cly Boehs would be happy to tell you.)

There are two things about learning: (1) it's fun. And (2) you're never done.  And when it comes to writing, there are always new areas to investigate, new worlds to create.

So many stories to tell, so little time.
**********************************************
Author and biochemist Camilla Pang was diagnosed with autism spectrum disorder at age eight, and spent most of her childhood baffled by the complexities and subtleties of human interactions.  She once asked her mother if there was an instruction manual on being human that she could read to make it easier.
Her mom said no, there was no instruction manual.
So years later, Pang recalled the incident and decided to write one.
The result, Explaining Humans: What Science Can Teach Us About Life, Love, and Relationships, is the best analysis of human behavior from a biological perspective since Desmond Morris's classic The Naked Ape.  If you're like me, you'll read Pang's book with a stunned smile on your face -- as she navigates through common, everyday behaviors we all engage in, but few of us stop to think about.
If you're interested in behavior or biology or simply agree with the Greek maxim "gnothi seauton" ("know yourself"), you need to put this book on your reading list.  It's absolutely outstanding.
[Note:  if you purchase this book using the image/link below, part of the proceeds goes to support Skeptophilia!]