Every once in a while, I'll run across a piece of scientific research that is so creative and clever that it just warms my heart, and I felt this way yesterday when I stumbled onto a link to the article in PLoS ONE called "The Phylogeny of Little Red Riding Hood," by Jamshid Tehrani of the University of Bristol.

The reason I was delighted by Tehrani's paper is that it combines two subjects I love -- evolutionary biology and mythology and folklore.  The gist of what Tehrani did is to use a technique most commonly used to assemble species into "star diagrams" -- cladistic bootstrap analysis -- to analyze worldwide versions of the "Little Red Riding Hood" story to see to what degree a version in (for example) Senegal was related to one in Germany.

Cladistic bootstrap analysis generates something called a "star diagram" -- not, generally, a pedigree or family tree, because we don't know the exact identity of the common ancestor to all of the members of the tree, all we can tell is how closely related current individuals are.  Think, for example, of what it would look like if you assembled the living members of your family group this way -- you'd see clusters of close relatives linked together (you, your siblings, and your first cousins, for example) -- and further away would be other clusters, made up of more distant relatives grouped with their near family members.

So Tehrani did this with the "Little Red Riding Hood" story, by looking at the similarities and differences, from subtle to major, between the way the tale is told in different locations.  Apparently there are versions of it all over the world -- not only the Grimm Brothers Fairy Tales variety (the one I know the best), but from Africa, the Middle East, India, China, Korea, and Japan.  Oral transmission of stories is much like biological evolution; there are mutations (people change the story by misremembering it, dropping some pieces, embellishment, and so on) and there is selection (the best versions, told by the best storytellers, are more likely to be passed on).  And thus, the whole thing unfolds like an evolutionary lineage.

In Tehrani's analysis, he found three big branches -- the African branch (where the story is usually called "The Wolf and the Kids"), the East Asian branch ("Tiger Grandmother"), and the European/Middle Eastern Branch ("Little Red Riding Hood," "Catterinella," and "The Story of Grandmother").  (For the main differences in the different branches, which are fascinating but too long to be quoted here in full, check out the link to Tehrani's paper.)

Put all together, Tehrani came up with the following cladogram: 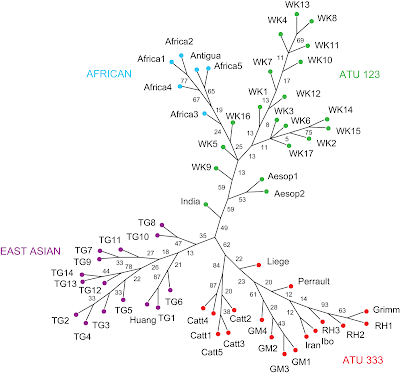 WK = "The Wolf and the Kids," TG = "Tiger Grandmother," "Catt" = "Catterinella," GM = "The Story of Grandmother," and RH = "Little Red Riding Hood;" the others are less common variations that Tehrani was able to place on his star diagram.

The whole thing just makes me very, very happy, and leaves me smiling with my big, sharp, wolflike teeth.

Pure research has been criticized by some as being pointless, and this is a stance that I absolutely abhor.  There is a completely practical reason to support, fund, and otherwise encourage pure research -- and that is, we have no idea yet what application some technique or discovery might have in the future.  A great deal of highly useful, human-centered science has been uncovered by scientists playing around in their labs with no other immediate goal than to study some small bit of the universe.  Further, the mere application of raw creativity to a problem -- using the tools of cladistics, say, to analyze a folk tale -- can act as an impetus to other minds, elsewhere, encouraging them to approach the problems we face in novel ways.

But I think it's more than that.  The fundamental truth here is that human mind needs to be exercised.  The "what good is it?" attitude is not only anti-science, it is anti-intellectual.  It devalues inquiry, curiosity, and creativity.  It asks the question "how does this benefit humanity?" in such a way as to imply that the sheer joy of comprehending deeply the world around us is not a benefit in and of itself.

It may be that Tehrani's jewel of a paper will have no lasting impact on humanity as a whole.  I'm perfectly okay with that, and I suspect Tehrani would be, as well.  We need to make our brains buckle down to the "important stuff," yes; but we also need to let them out to play sometimes, a lesson that the men and women currently overseeing our educational system need to learn.  In a quote that seems unusually apt, considering the subject of Tehrani's research, Albert Einstein said: "I am enough of an artist to draw freely upon my imagination.  Imagination is more important than knowledge.  Knowledge is limited.  Imagination encircles the world."

Posted by Gordon Bonnet at 9:16 AM