The geologists have lost about a billion or so years, have you noticed?
This wee time slip has to do with the sedimentary strata best observed in the Grand Canyon, which showed a peculiarity noticed -- but not explained -- by explorer John Wesley Powell in 1869.  Powell knew about sedimentary rock formation and the Principle of Superposition -- the rather common-sensical idea that in undisturbed strata, the lower layers were formed first.  (It's like building a layer cake -- it'd be rather tricky to build it from the top down.)
In Powell's case, he noticed what looked like a jump in rock types and stratum structure, where because of fault lines and angles of tilt it seemed like there was a gap in the rock record.  What neither Powell nor anyone else knew at the time was how big this gap -- which Powell called "the Great Unconformity" -- was.
It represents the loss of about a billion years of accumulated rocks. 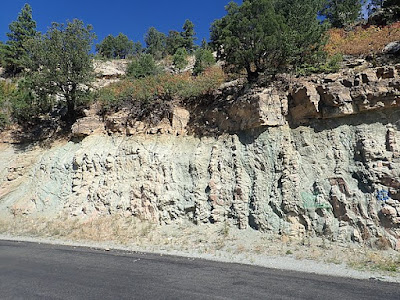 The Arroyo Penasco Formation showing the Great Unconformity, Montezuma, New Mexico [Image is in the Public Domain]
That by itself would be enough to suggest that whatever caused the Great Unconformity, it was not some local effect, and it didn't take much surveying to confirm this.  In fact, the same jump has been seen in just about every place there's rock of that age (right around the boundary between the Cambrian and Precambrian eras), most notably in the St. François Mountains of Arkansas and at Siccar Point on the east coast of Scotland.
In each case, there is 1.4 billion year old rock (mostly granite, rhyolite, and schist), and the layer immediately above it dates to around 500 million years ago.
In between -- nothing.
It wasn't until 1910 that the magnitude of this bizarre gap was fully appreciated.  In Cambrian Geology and Paleontology, geologist Charles D. Walcott wrote:

I do not know of a case of proven conformity between Cambrian and pre-Cambrian Algonkian rocks on the North American continent.  In all localities where the contact is sufficiently extensive, or where fossils have been found in the basal Cambrian beds or above the basal conglomerate and coarser sandstones, an unconformity has been found to exist.  Stated in another way, the pre-Cambrian land surface was formed of sedimentary, eruptive, and crystalline rocks that did not in any known instance immediately precede in deposition or origin the Cambrian sediments.  Everywhere there is a stratigraphic and time break between the known pre-Cambrian rocks and Cambrian sediments of the North American continent.

But what on Earth could tear down a billion years' worth of strata -- all over the world, more or less simultaneously (if you can call anything that had a duration of a billion years "simultaneous")?  Scientists believe that these missing layers represent something on the order of six to eight vertical kilometers of rock.

Some new research has indicated a possible trigger -- and perhaps the mechanism involved.  Back around the beginning of the gap, all of the continents of the Earth had slammed together to form one huge supercontinent.  This was pre-Pangaea, the one most people will think of; this was Rodinia, a colossal land mass that lasted from the late Precambrian Era to right about the beginning of the Cambrian, at which point rifting took over and the continents separated into a new configuration.

Here's what seems to have happened.  When Rodinia formed, the force of the collisions pushed a lot of rock skyward.  We're seeing exactly the same thing happen today in the Himalayas; Mount Everest is sedimentary rock that was once at the bottom of the ocean, but the collision between India and the main part of Asia scooped it up like a huge plow and raised enormous mountains.  This same process occurred during the formation of Rodinia, but on a global scale as all of the world's land masses collided.

But by the beginning of the Cambrian, a huge amount of that rock was gone, eroded away.  What could cause erosion on that scale?

It seems like the likeliest explanation is worldwide glaciation.  The late Precambrian has been called the "Cryogenic Period" -- from Greek words meaning "ice-forming" -- as well as the perhaps more vivid moniker of the "the Snowball Earth."  The shoving of the Precambrian rocks aloft created steep topography (again, just like in the Himalayas today), so any erosive forces, whether ice or liquid water, would have that much more gravity-driven force to grind it down.

As a biologist, what I find even cooler is that that breakup of Rodinia, which coincided with the thawing of the Snowball Earth, was also the beginning of a huge diversification of life on Earth, something that has been nicknamed the Cambrian Explosion.  I don't think it's a reach to hypothesize that these two events were connected.

So do we owe the current biodiversity -- and, by our extension, our own presence here -- to a process that erased every trace of a billion years of sedimentary rock layers?

I find it fascinating how everything is connected, and that even after a couple of centuries of intense study, there are still mysteries out there to solve.  The unconformities in our own knowledge are still huge, but unlike the one in the Grand Canyon, aren't immediately obvious.  Filling in these gaps inevitably opens up new questions, enough that scientists will never run out of new areas to explore.  As Socrates said, over two thousand years ago, "If I am accounted wise, it is only because I alone realize how little I know."