The origins of Old Yeller

Since the last few days (hell, the last few years) of news has been filled with one horrible thing after another, today I'm retreating into my happy place, namely: the cool scientific discovery of the week.

I don't know if it's ever occurred to the dog lovers in the studio audience how unusual dog coat coloration is.  I can't think of another animal species that has such striking variability -- from the jet black of black labs to the solid bronze of golden retrievers to the spots of Dalmatians to the particolored patches of collies, there is huge variation in fur color across the species.

One additional one that is especially curious is called agouti coloration -- when the base of the hair is yellow and the tip is black.  This is frequently seen in German shepherds, and was also the coat pattern in my beloved rescue dog Grendel: 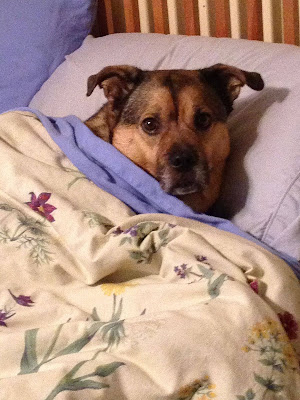 If you're wondering, Grendel was not spoiled.  At all.

As you can see, Grendel also looked a bit like someone created a Frankendog by stitching together parts of about six different breeds.  He didn't have any other German-shepherd-like characteristics, but he definitely seemed to have pilfered his fur from one while it wasn't looking.

Well, a new piece of research that appeared in Nature Ecology and Evolution this week indicates that five very common coat color patterns in dogs come from the activity of a single gene.  Where and when this gene activates (and creates a gene product called the agouti signaling protein) determines the deposition of two pigments -- eumelanin (which is black) and pheomelanin (which is yellow).  The amount and placement of these two pigments creates five different color patterns, as shown below: 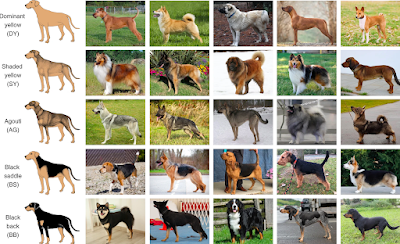 One of these alleles, dominant yellow, is apparently of ancient origins; the researchers determined that it was present in an extinct canid species that branched off from wolves over two million years ago.

I'm a little curious about another dog coat feature, the white blaze, something my current non-spoiled dog Guinness has: 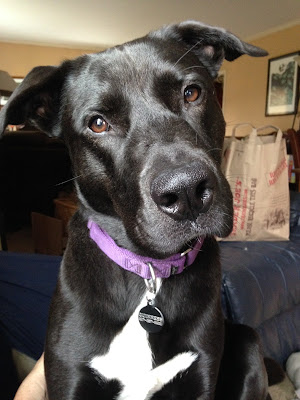 He also has white toes, which may or may not be related: 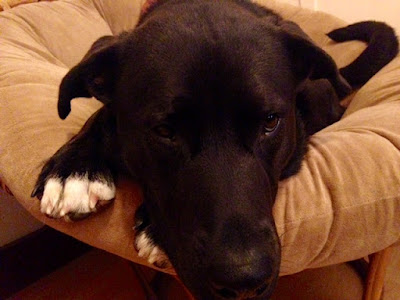 As you can see from the image from Bannasch et al., some of the dogs expressing each pattern have white blazes and some don't, so whatever genetic mechanism controls it must be independent of the agouti gene.

But if you have a dog with some yellow or agouti coloration, you now know that your pooch descends from a branch of the canine family tree that is two million years old.  As far as Guinness goes, I flatly refuse to believe he descends from wolves.  His level of fierceness is somewhere between "cream puff" and "cupcake."  He is basically a seventy-pound lap dog. 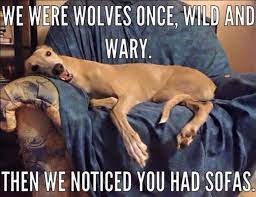 In any case, that's the latest from the field of canine genetics and evolution.  Me, I wonder where another important dog feature comes from, and that's the cute head tilt.  There's no doubt that it's a significant selective advantage:

Speaking of which, I need to go get my dogs their breakfast because they're staring at me.  You'd think if they really are descended from wolves, they could go hunt down a squirrel or something, but I guess the decision to take advantage of sofas was made at the same time as they figured out it was easier to wait for someone to place a bowl full of dog food in front of them than to wear themselves out chasing some scrawny squirrel.
You gotta wonder who has trained whom, here.