The voices of our ancestors

One of the (many) reasons I love science is that as a process, it opens up avenues to knowledge that were previously thought closed.  Couple that with the vast improvements in technological tools, and you have a powerful combination for exploring realms that once were not considered "science" at all.

Take, for example, historical linguistics, the discipline that studies the languages spoken by our ancestors.  It is a particular fascination of mine -- in fact, it is the field I studied for my MA.  (Yes, I know I spent 32 years teaching biology.  It's a long story.)  I can attest to the fact that it's a hard enough subject, even when you have a plethora of written records to work with, as I did (my thesis was on the effects of the Viking invasions on Old English and Old Gaelic).  When records are scanty, or worse yet, non-existent, the whole thing turns into a highly frustrating, and highly speculative, topic.

This is the field of "reconstructive linguistics" -- trying to infer the characteristics of the languages spoken by our distant ancestors, for the majority of which we have not a single written remnant.  If you look in an etymological dictionary, you will see a number of words that have starred ancestral root words, such as *tark, an inferred verb stem from Proto-Indo-European that means "to twist."  (A descendant word that has survived until today is torque.)  The asterisk means that the word is "unattested" -- i.e., there's no proof that this is what the word actually was, in the original ancestor language, because there are no written records of Proto-Indo-European.  And therein, of course, lies the problem.  Because it's an unattested word, no one can ever be sure if it's correct (which the linguists will tell you straight up; they're not trying to claim more than they should -- thus the asterisks).
So if you think a particular Proto-Indo-European root reconstructs as *lug and your colleague thinks it's *wuk, you can argue about it till next Sunday and you still will never be certain who's right, as there are very few Proto-Indo-Europeans around these days who could tell you for sure.
Okay, then how do the linguists even come up with a speculative ancestral root?  The inferred words in etymological dictionaries come mainly from the application of one of the most fundamental rules of linguistics: Phonetic changes are regular. 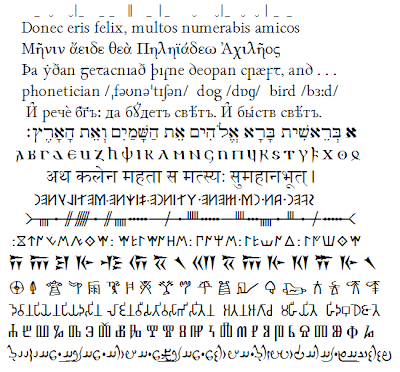 As a quick illustration of this -- and believe me, I could write about this stuff all day -- we have Grimm's Law, which describes how stops in Proto-Indo-European became fricatives in Germanic languages, but they remained stops in other surviving (non-Germanic) Indo-European languages.  One example is the shift of /p/ to /f/, which is why we have foot (English), fod (Norwegian), Fuss (German), fótur (Icelandic), and so on, but poús (Greek), pes (Latin), peda (Lithuanian), etc.  These sorts of sound correspondences allowed us to make guesses about what the original word sounded like.

Note the use of the past tense in the previous sentence.  Because now linguists have a tool that will take a bit of the guesswork out of reconstructive linguistics -- and shows promise to bringing it into the realm of a true science.

An article in Science World Report, entitled "Ancient Languages Reconstructed by Linguistic Computer Program, describes how a team of researchers at the University of British Columbia and the University of California - Berkeley has developed software that uses inputted lexicons to reconstruct languages.  (Read their original paper here.)  This tool automates a process that once took huge amounts of painstaking research, and even this first version has had tremendous success -- the first run of the program, using data from 637 Austronesian languages currently spoken in Asia and the South Pacific, generated proto-Austronesian roots for which 85% matched the roots derived by experts in that language family to within one phoneme or fewer.

What I'm curious about, of course, is how good the software is at deriving root words for which we do have written records.  In other words, checking its results against something other than the unverifiable derivations that historical linguists were already doing.  For example, would the software be able to take lexicons from Spanish, French, Portuguese, Italian, Catalan, Provençal, and so on, and correctly infer the Latin stems?  To me, that would be the true test; to see what the shortcomings were, you have to have something real to check its results against.

But even so, it's a pretty nifty new tool.  Just the idea that we can make some guesses at what language our ancestors spoke six-thousand-odd years ago is stunning, and the fact that someone has written software that reduces the effort to accomplish this is cool enough to set my little Language Nerd Heart fluttering.  It is nice to see reconstructive linguistics using the tools of science, thus bringing together two of my favorite things.  Why, exactly, I find it so exciting to know that *swey may have meant "to whistle" to someone six millennia ago, I'm not sure.  But the fact that we now have a computer program that can check our guesses is pretty damn cool.
**********************************************
Author and biochemist Camilla Pang was diagnosed with autism spectrum disorder at age eight, and spent most of her childhood baffled by the complexities and subtleties of human interactions.  She once asked her mother if there was an instruction manual on being human that she could read to make it easier.
Her mom said no, there was no instruction manual.
So years later, Pang recalled the incident and decided to write one.
The result, Explaining Humans: What Science Can Teach Us About Life, Love, and Relationships, is the best analysis of human behavior from a biological perspective since Desmond Morris's classic The Naked Ape.  If you're like me, you'll read Pang's book with a stunned smile on your face -- as she navigates through common, everyday behaviors we all engage in, but few of us stop to think about.
If you're interested in behavior or biology or simply agree with the Greek maxim "gnothi seauton" ("know yourself"), you need to put this book on your reading list.  It's absolutely outstanding.
[Note:  if you purchase this book using the image/link below, part of the proceeds goes to support Skeptophilia!]