The wall beneath the roadway

I think the reason I'm drawn to history is because of how much we don't know.

Whenever I'm in a place that has tangible relics from the past, it always comes to mind to wonder who the people were who handled and used those things, who had stood in that place centuries ago.  What were their lives like?  It's in part the same curiosity that got me interested when I was a teenager in my own family history.  Those names on the historical records were real people with real lives, and about whom I will only know the barest fraction no matter how much research I do.  One of my favorite examples is my great-great-grandmother, Sarah (Handsberry) (Overby) (Biles) Rulong, who left her home in Montgomery County, Pennsylvania at age about twenty.  To my knowledge, she left behind her entire family -- the people she traveled with afterward were strangers -- and in around 1800, she went from southeastern Pennsylvania to New Madrid, Missouri, where she married her first husband (Burwell Overby), and had one child.  She and her daughter then upped stakes and went to southern Louisiana, where she married husband #2 (John Biles) and #3 (Aaron Rulong), having four more children from each marriage.  She outlived all three husbands, and doesn't show up in the 1830 census, but whether that's because she died herself or went on to other adventures in other places, I have no idea.

What would impel a twenty-year-old unmarried woman to launch off with a bunch of strangers into what was then trackless wilderness?  I've always wondered what her life must have been like.  (I am not unaware that there's a possibility she might have been a prostitute -- not uncommon in those days -- and I know at least that her third husband, who is my great-great-grandfather, wasn't exactly of law-abiding stock himself; Aaron Rulong had abandoned his first wife and children to go west, and his father Luke was arrested multiple times for such crimes as poaching, rioting, trespassing, mischief-making, and disturbing the peace.  My family tree definitely has some seriously sketchy branches.)

It was when I was in England that I was struck most forcefully by the thought of all the legions of people who had trod that ground before me.  The indigenous people who had occupied the land I currently live on -- the Seneca and Cayuga tribes -- didn't leave a lot in the way of permanent construction, so although I know they were here, I'm not hit by it directly on a daily basis the way one is in somewhere like England.  The tangible artifacts there go back thousands of years.  When, on a cool, blustery day, I walked on Hadrian's Wall -- the second-century C.E. wall running across Britain from Solway Sound to the mouth of the Tyne River -- and looked out across the empty moorland northward, it was easy to imagine being one of the Roman Legionnaires posted on duty and waiting for the next attack of the Scots and Picts, the "barbarian tribes" the Wall was intended to keep out. 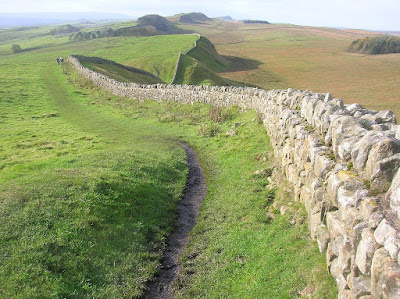 [Image courtesy of the Creative Commons quisnovus from Gloucester, England, Section of Hadrian's Wall 1, CC BY 2.0]

In fact, Hadrian's Wall is the reason this whole topic comes up.  My friend (and frequent contributor of great topics for Skeptophilia), Gil Miller, sent me a link from Smithsonian Magazine that a previously-unknown piece of Hadrian's Wall was just unearthed -- beneath one of Newcastle-upon-Tyne's busiest roads.

Workers were digging into the surface of West Road to replace a section of storm sewer pipe, and only a couple of feet down they ran into stonework that was obviously not of recent vintage.  Archaeologists were called in, and they were able to identify it as Roman construction dating to the early part of the second century, and that it was contiguous with the known parts of the Wall.

"Despite the route of Hadrian’s Wall being fairly well documented in this area of the city, it is always exciting when we encounter the wall’s remains and have the opportunity to learn more about this internationally significant site," said Philippa Hunter of Archaeological Research Services Ltd., the group that is working to study and preserve the site.  "This is particularly true in this instance where we believe that we uncovered part of the wall’s earliest phase."
Archaeologist Miranda Aldhouse-Green, in a 2006 documentary about what was then known of Hadrian's Wall, identified exactly the feature of it I find the most compelling; what it must have been like for the people who constructed it, 1,900 years ago.  "We have to envisage an area of Britain where there wasn’t all that much stone building, certainly no monumental masonry. So it would have been a totally alien thing," Aldhouse-Green said.  "It would be like a visitation from another world, and people would be gobsmacked by it."
Fortunately, the people at Northumbrian Water, the group that manages the water infrastructure in Newcastle and who were the ones that made the discovery, seem pleased about it despite the interruption it will be for their work.  "It is amazing that we have been able to make this brilliant discovery, and we are glad to be working with Archaeological Research Services to make sure that it is properly protected going forward," said Graeme Ridley, the project manager who was overseeing the construction.  "This is an incredibly special part of North East heritage and we are honored to be a part of it."
It's fascinating to consider the lives of the people who lived in what was then a distant outpost of the Roman Empire, who were stationed in a place that was perilous and uncomfortable on a good day, and where life was "poor, nasty, brutish, and short" (to pilfer the apt description by Thomas Hobbes) even ignoring the added danger of catching a Scottish spear in your back.  There's so much about the lives of our ancestors we don't know, even with the best work of the historians and archaeologists.  We're left to consider the artifacts they left behind, and after that all we can do is fill in the rest of the gaps with our imaginations -- at least until someone invents a time machine.
**********************************************
This week's Skeptophilia book-of-the-week is by an author we've seen here before: the incomparable Jenny Lawson, whose Twitter @TheBloggess is an absolute must-follow.  She blogs and writes on a variety of topics, and a lot of it is screamingly funny, but some of her best writing is her heartfelt discussion of her various physical and mental issues, the latter of which include depression and crippling anxiety.
Regular readers know I've struggled with these two awful conditions my entire life, and right now they're manageable (instead of completely controlling me 24/7 like they used to do).  Still, they wax and wane, for no particularly obvious reason, and I've come to realize that I can try to minimize their effect but I'll never be totally free of them.
Lawson's new book, Broken (In the Best Possible Way) is very much in the spirit of her first two, Let's Pretend This Never Happened and Furiously Happy.  Poignant and hysterically funny, she can have you laughing and crying on the same page.  Sometimes in the same damn paragraph.  It's wonderful stuff, and if you or someone you love suffers from anxiety or depression or both, read this book.  Seeing someone approaching these debilitating conditions with such intelligence and wit is heartening, not least because it says loud and clear: we are not alone.
[Note: if you purchase this book using the image/link below, part of the proceeds goes to support Skeptophilia!]