One of the subtlest features of the evolutionary model, and one often misunderstood even by people who understand and accept natural selection, is what we mean by "selective advantage."

On the surface, it's simple enough; any inheritable feature that confers longer, healthier life or more (and more vigorous) offspring.  The problem is, there are two twists on phenotype that make this a bit more complicated than it seems at first.

The first is that physical expression of genes is seldom unequivocally either good or bad for the organism.  The "unequivocally bad" ones are often discussed in introductory biology classes because they are simple; Tay-Sachs disease, for example, caused by inheriting a particular recessive allele from both parents, kills the brain cells and usually causes death by age four.  But most traits have good features and bad, so the question becomes, "Is this good for the organism on balance?"  One instance is our upright posture and bipedal gait.  It confers some advantages -- two of the more commonly-cited ones are leaving our hands free to manipulate tools, and giving us greater sight-distance for spotting predators.  (Nota bene: no one's sure which of those advantages led to our ancestors walking upright, or if it was something else entirely; saying "these are some of the advantages" is not the same as saying "these were the advantages that drove selection for this trait.")  The downside of upright posture, though -- given that we still have the basic spine shape as our knuckle-walking forebears -- is that humans have some of the worst lower back problems to be found in the animal world, with the only ones having it worse being Bassett hounds and dachsunds.

And the low-slung backs of Bassetts and wiener dogs are hardly the fault of natural selection.

Another complicating factor is pleiotropy -- which is that many genes have multiple effects, often only loosely related to each other.  The classic example of pleiotropy is the connection between coat and eye color, and inner ear development, in cats.  White, blue-eyed cats are frequently deaf -- the same gene that blocks pigment formation (and causes the white coat and blue eyes) hinders development of the cochlea, resulting in deafness.

What makes it even more complex is that sometimes a gene can have a drastically different set of effects depending on whether you have one copy (are heterozygous) or two (are homozygous).  It was long a puzzle of evolutionary science why some deleterious recessive genes are so common.  If having two copies of a gene kills you, effectively removing two copies of the allele from the gene pool, you'd expect the frequency of the allele to decrease over time.  So why do some really nasty genes stick around? 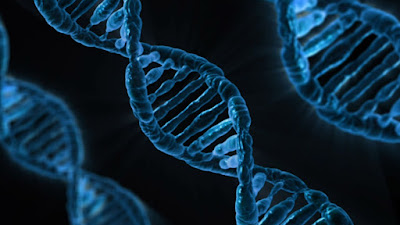 Two examples where we've actually figured out the answer are the genes that cause cystic fibrosis (a horrible lung disease which is one of the more common serious genetic disorders in Caucasians) and sickle-cell anemia (an equally-dreadful blood disorder common in sub-Saharan Africans and African Americans).  While having two copies of either of those genes is certainly awful, having only one is beneficial, giving the individual an advantage over both the ones who have two bad copies and the ones who have two good copies of the allele.  In the case of cystic fibrosis, being heterozygous gives infants a significantly lower chance of contracting infantile diarrheal disease, which in cultures with limited access to medical care is a major killer of babies.  In sickle-cell anemia, having one copy of the allele gives you resistance to malaria -- so in malaria-ridden areas, homozygous recessive people die of sickle-cell anemia, and homozygous dominant people die of malaria.  Heterozygous individuals escape both.

Even seemingly unimportant genes can sometimes have unexpected effects.  It was long thought that the blood-type alleles -- nicknamed A, B, and O -- had no effect on anything other than blood transfusion compatibility.  It was recently discovered that the O blood type allele, which is the most common, confers resistance to smallpox.  So in areas that had smallpox epidemics, the individuals who were type A (the most susceptible allele) were much more likely to die, leaving the type Os at a significant selective advantage.  A map of the incidence of smallpox in Europe and a map of the frequency of the O blood type allele line up almost perfectly.

The reason all this comes up is because of a paper last week in the journal Development that looked at a rather horrifying genetic disorder called holoprosencephaly, where something interferes with prenatal forebrain development.  Affected children end up with malformed brains and multiple facial disfigurements -- cleft palate, cleft lip, and eyes that are extremely close together (in fact, sometimes they're fused).  These babies almost always die in utero.

Geneticists at the Max Delbrück Center for Molecular Medicine found two mutations that influenced the development of holoprosencephaly, which are called ULK4 and PTTG1.  Both of these genes regulate expression of the ultra-important sonic hedgehog gene, which is responsible for organ formation, nervous system development, and such fundamental features as symmetrical limb placement.  The researchers found that these two genes prevent holoprosencephaly, which you'd think would be enough of an advantage that it would eventually lead them to becoming fixed (everyone in the population being homozygous) except for rare cases of mutations.

Where it gets more interesting is that the researchers found that ULK4 and PTTG1 have other effects besides stopping holoprosencephaly in its tracks.  ULK4 is associated with schizophrenia and bipolar disorder -- and PTTG1 is linked to cancer.

So like cystic fibrosis and sickle-cell anemia, it's not as simple as saying "this allele is the good one, and this is the bad one."  And because both of the negative effects of ULK4 and PTTG1 affect individuals later in life, very likely after they have made the decision whether to have kids, the positive effect (surviving gestation) far outweighs the negative ones, at least from an evolutionary standpoint.

As I used to tell my AP Biology classes, "evolution doesn't really give a damn what happens to you after you've successfully procreated."  Harsh, but true in its essence.

So genetics and evolution are, like most things, a mixed bag.  They're a lot more complicated than they may seem at first, enough that it's kind of impressive researchers have been able to figure out how they work.  Considering what could potentially go wrong with development, I'm kind of blown away by how often things go right.  When my first wife found out she was pregnant, I spent the next eight or so months worrying, because I knew enough genetics to realize how bad things could be.  When my older son was born -- completely normal, except that he looks exactly like me, which is unfortunate but not fatal -- it was an incredible relief.

It may not be true that "a little knowledge is a dangerous thing," but sometimes it can be a bit stress-inducing.