Some years ago I was in a musical trio called Alizé that specialized in traditional French folk music.  One weekend we played a gig at a local music festival, and we were approached by a very nice fellow named Will Russell who told us how much he'd enjoyed our playing -- and said he thought we should record an album.

Will is no amateur music enthusiast.  He runs Electric Wilburland, a recording studio in Newfield, New York, not far from where I live.  Will is a Grammy-winning sound engineer, and as we soon found out, is truly gifted at making musicians sound their absolute best.  He also has some nifty tricks up his sleeve, which we discovered when we were working on the audiofile for a four-tune medley we'd just recorded.

"What's your concept for this one?" Will asked.

We explained to him that the first tune is solemn, almost religious-sounding, and it gradually ramps up until reaching a peak in the last tune, a lightning-fast dance tune called "Gavotte des Montagnes."

Will frowned thoughtfully.  "Okay, for the first bit, in church.  Do you know what church you want it to be in?"

I thought he was joking.

"No, really," he explained.  "I have acoustic sampling from a bunch of different cathedrals.  Do you want to sound like you're in St. Paul's?  Or York Minster?  Or Chartres Cathedral?  Or...?"

He proceeded to play our track to us, applying the acoustics of various different cathedrals.  We ended up picking Chartres, not only because it sounded awesome, but because it seemed appropriate for a French song. 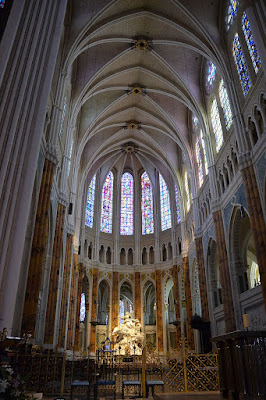 With all due modesty -- and with many thanks both to Will and to my bandmates -- the album (titled Le Canard Perdu) came out sounding pretty cool, and if you're so inclined, it's available on iTunes.

The topic comes up because of a paper this week in Science Advances by a team led by Theodor Becker of ETH Zürich, which has looked at the question of how we know what kind of space we're in acoustically, and then seeing if there's a way to mimic that by altering the qualities of the sound -- characteristics like reverb, interference patterns between whatever's producing the sound and the various echoes from surfaces, and so on.  The ultimate goal is to achieve whatever kind of acoustic illusion you want, from being in a particular cathedral to being underwater to having the echoes (or even the original sounds) cloaked entirely.

I don't pretend to understand the technical bits; but the results are mind-boggling.  The authors write:

[W]e demonstrate in 2D acoustic experiments that a physical scattering object can be replaced with a virtual homogeneous background medium in real time, thereby hiding the object from broadband acoustic waves (cloaking).  In a second set of experiments, we replace part of a physical homogeneous medium by a virtual scattering object, thereby creating an acoustic illusion of an object that is not physically present (holography).  Because of the broadband nature of the control loop and in contrast to other cloaking approaches, this requires neither a priori knowledge of the primary energy source nor of the scattered wavefields, and the approach holds even for primary sources, whose locations change over time.

The military applications of this technology are apparent; cloaking the sound of a surveillance device (or other piece of equipment), or creating the illusion that it's something (or somewhere) else, are of obvious utility in military settings.  As a musician, I'm more interested in the creative aspects.  The ability to create what amount to acoustic illusions is a significant step up from Will's already-impressive magic trick of teleporting us to Chartres Cathedral.

The purists in the studio audience are probably bouncing up and down in their chairs with indignation at the idea of further mechanizing the process of making (and recording) music.  I've heard plenty of musicians decrying the use of features like auto-tune -- the usual objection being that it allows second-rate singers to tune up electronically and sound way better than they actually are.

No doubt it's sometimes used that way, but I'll throw out there that like any technology for enhancing the creative process, it can be used as a cheat or it can be used to further expand the artistry and impact of the performance.  One example that immediately comes to mind is the wild, twisty use of auto-tune in Imagine Dragons' brilliantly surreal song "Thunder:"

But for innovative use of technology in music, there's no one better than the amazing British singer Imogen Heap.  Check out her use of looping for this mind-boggling --and live -- performance of her song "Just for Now:"
I've been a musician for forty years and have been up on stage more times than I can even begin to estimate, and I can't imagine having the kind of coordination to pull off something like that in front of a live audience.

So I find the Becker et al. paper exciting from a number of standpoints.  When you think about it, musicians have been experimenting with new technology all along, and not just with electronic tinkering.  Every time a new musical instrument is invented -- regardless if it's a viola da gamba or a theremin -- it expands what kind of auditory experience the listener can have.  When electronic music first gained momentum in the 1960s with pioneers like Wendy Carlos and Isao Tomita, it elicited a lot of tut-tutting from the classical music purists of the day -- but now just about everyone recognizes them for their innovative genius.  Masterpieces like Carlos's Switched-On Bach and The Well-Tempered Synthesizer and Tomita's Firebird and The Snowflakes are Dancing have rightly taken their place amongst the truly great recordings of non-standard performances of classical music.

I'll be interested to see where all this leads.  I'll end with a quote from Nobel-Prize-winning biochemist Albert Szent-Györgyi.  He was speaking about science, but it could apply equally well to any creative endeavor.  "Discovery consists of seeing what everyone has seen, and thinking what nobody else has thought."