Last week I had a frustrating exchange with an acquaintance over the safety of the COVID-19 vaccine.

He'd posted on social media a meme with the gist that there'd been so much waffling and we're-not-sure-ing by the medical establishment that you couldn't trust anything they said.  I guess he'd seen me post something just a few minutes earlier and knew I was online, because shortly afterward he DMd me.

"I've been waiting for you to jump in with your two cents' worth," he said.

I guess I was in a pissy mood -- and to be honest, anti-vaxx stuff does that to me anyhow.  I know about a dozen people who've contracted COVID, two of whom died of it (both members of my graduating class in high school), and in my opinion any potential side-effects from the vaccine are insignificant compared to ending your life on a ventilator.

"Why bother?" I snapped at him.  "Nothing I say to you is going to make the slightest bit of difference.  It's a waste of time arguing."

He started in on how "he'd done his research" and "just wasn't convinced it was safe" and "the medical establishment gets rich off keeping people sick."  I snarled, "Thanks for making my point" and exited the conversation. 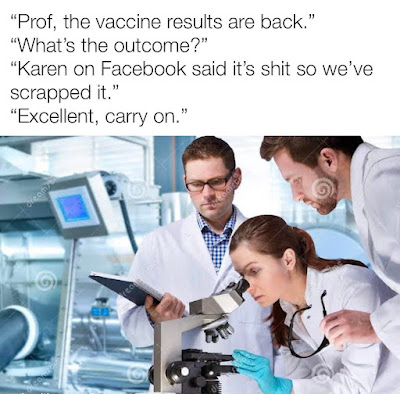 It's kind of maddening to be told "I've done my research" by someone who not only has never set foot in a scientific laboratory, but hasn't even bothered to read peer-reviewed papers on the topic.  Sorry, scrolling through Google, YouTube, and Reddit -- and watching Fox News -- is not research.
Unlike a lot of anti-science stances, this one is costing lives.  Every single day I see news stories about people who have become grievously ill with COVID, and whose relatives tell tearful stories after they died about how much they regretted not getting the vaccine.  Today's installment -- from a man in Tennessee who has been in the hospital for three weeks and is still on oxygen -- "They told us not to worry, that it was just a bad cold.  They lied."
The problem is -- like my acquaintance's stubbornly self-confident "I've done my research" comment -- fighting this is a Sisyphean task.  If you think I'm exaggerating, check out the paper that came out this week in Journal of the European Economic Association, about some (actual, peer-reviewed) research showing that not only do we tend to gloss over evidence contradicting our preferred beliefs, when we then share those beliefs with others, our certainty we're right increases whether or not the people we're talking to agree with us.
The phenomenon, which has been called bias amplification, is like confirmation bias on steroids.  "This experiment supports a lot of popular suspicions about why biased beliefs might be getting worse in the age of the internet," said Ryan Oprea, who co-authored the study.  "We now get a lot of information from social media and we don't know much about the quality of the information we're getting.  As a result, we're often forced to decide for ourselves how accurate various opinions and sources of information are and how much stock to put in them.  Our results suggest that people resolve this quandary by assigning credibility to sources that are telling us what we'd like to hear and this can make biases due to motivated reasoning a lot worse over time."
I don't even begin to know how to combat this.  The problem is, most laypeople (and I very much include myself in this) lack the expertise to comprehend a lot of peer-reviewed research on immunology, which is usually filled with technical jargon and abstruse details of biochemistry.  And every step you take away from the actual research -- from university or research-lab press releases, to summaries in popular science magazines, to blurbs in ordinary media, to Some Guy's blog -- introduces more opinions, oversimplifications, and outright misinformation.
And I'm completely aware that Skeptophilia is also Some Guy's blog.  I will say in my own defense, however, that I do try to base what I write on the actual research, not on Tucker Carlson quoting Nicki Minaj's tweets about how her boyfriend got the COVID vaccine and afterward his balls swelled up.  (No, I am not making this up.)
So that's today's rather discouraging scientific study.  It's sad that so many of us have to become gravely ill, or watch someone we love die in agony, before we'll admit that we might have been wrong.  I'll just end with what the research -- from the scientists themselves -- has to say: the COVID vaccines are safe and effective, and the vast majority of people who have had severe COVID are unvaccinated.  The "breakthrough cases" of vaccinated people testing positive almost never result in hospitalization, and when they do, it's because of comorbidities.
But don't take my word for it.  If you honestly want to know what the research says, and you're willing to keep an open mind on the topic and shape your opinion based upon the evidence, start here.  And after that, go out and get the fucking vaccine.
Seriously.