It's been a while since we've had anything here at Skeptophilia of a purely cryptozoological nature, partly because the ongoing sightings of Bigfoot and Nessie and the Chupacabra and Mokele-Mbémbé and the rest of the crew have been pretty pedestrian of late.  More anecdotal eyewitness accounts, more blurry photographs, zero in the way of hard evidence.  Even one of the recent sightings from Loch Ness -- supposedly showing the Monster's dark, shadowy shape swimming just underneath the water -- was kind of underwhelming, and in fact it took me about five watchings, and having one of the people in the comments section tell me when and where in the video it occurred, for me even to see anything other than a placid Scottish lake on a cloudy day.  When I finally spotted it, it turned out to be a vague little dark smudge moving slowly from right to left, and that was about it.

One of the commenters said, "Oh gosh I'm never going to sleep again after watching this!"  Well, all I can say is it'd take a good bit more than this to keep me awake.  Maybe Nessie knocking on my window at night, or something.  I dunno.

In any case, just yesterday I ran into a cryptid sighting that was curious from a couple of perspectives.  It was reported at Stan Gordon's site UFO Anomalies Zone, which is not just about UFOs but all sorts of Fortean stuff, and allegedly occurred this past April.  A woman in Montgomery County, Pennsylvania reports being dive-bombed by a giant flying creature that sounds more like a pterodactyl than a bird.  She was arriving at an office for an appointment, and beforehand was sitting in her car in the parking lot talking to a friend on her phone, when an enormous creature soared overhead -- so large the shadow looked like a low-flying plane.  It glided up toward the roof of the office building, and landed on the top of the chimney.  Alarmed but intrigued, the woman told her friend what she'd seen, then said she was getting out of her car and to see if she could get a photo.

Here's how Stan Gordon describes what happened next:

[T]he giant bird looked down at her and made eye contact with what she told me were piercing fiery eyes.  The eyes were large and round even from the distance up on the roof.  They were vivid and green-red and orange in color.

The witness stated that the size of the creature was the most amazing thing that she had ever seen.  The moment it looked down she realized that it had made direct eye contact with her she knew she had to run.  She immediately turned and ran in panic and disbelief.  As she turned the corner, she looked back for a second.  The huge, winged creature was gliding toward her at an angle.  It was only about eight feet behind her, and its talons were out.  The woman made it to the door and rushed into the private office and yelled that she was being attacked by a huge bird.

It had a wingspan of between eight and ten feet, she said, and was brown in color -- but she didn't see any feathers, and wasn't sure it had feathers.

What makes this even more curious is that Gordon contacted the man with whom the woman had the appointment, and he confirmed that she had burst into the office in hysterics, saying she was being chased by a giant bird -- and then said that he, too, had seen some kind of giant winged creature in the area on several occasions, but always at a distance.  And he said that after the woman left her appointment, he'd gone outside.  The creature was gone, but he found that several bricks had been dislodged from the top of the chimney, and had fallen onto the roof and onto the ground below. 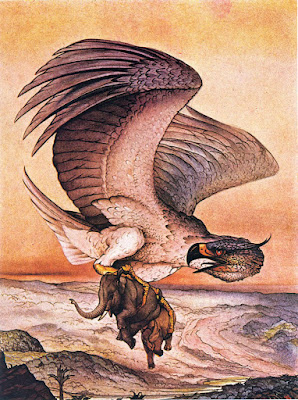 Edward Julius Detmold, "The Roc Carrying Away an Elephant," from his illustrations of The Second Voyage of Sinbad (1924) [Image is in the Public Domain]

What strikes me as the weirdest thing about this is the location.  I don't know if you've ever been to Montgomery County, Pennsylvania, but it is not some kind of remote area with wide-open spaces, few people, and lots of places that a big critter could hide.  It's more or less contiguous with the greater Philadelphia area, and is the third most populous county in the entire state.  (73rd most populous county in the United States as a whole, in fact.)  I've been through that area several times and although there are some farms and green spaces, mostly what I remember is strip malls.  It's kind of solid suburbia between Philadelphia and Reading along I-76.  There might be other places less likely to be inhabited by enormous pterodactyls, but Montgomery County has to be near the top of the list.

However terrifying it would be, this once again brings up the question of why other people have all the luck.  Here I am, out in an old house on wooded acreage in the middle of abso-freakin-lutely nowhere in upstate New York.  You'd think my name would be on the "People to Visit" list of every cryptid in the eastern half of the country.  Maybe you're thinking, "Yes, but you have two large dogs.  Maybe they keep the cryptids at bay."  To which I respond: you haven't met my dogs.  Lena is sweet, gentle, friendly, and has the IQ of a Pop-Tart.  If a thunderbird picked me up bodily out of our back yard and carried me away, I'd lay odds Lena would sleep right through it.  Guinness the Fierce Pit Bull, on the other hand, is such a complete wuss that he'd hide from a fluffy bunny, much less some humongous carnivorous Cretaceous holdover.

So counting on them to protect me would kind of be a losing proposition.

Anyhow, I'll issue a challenge: if there are any cryptids reading this, my back yard is at your disposal.  That also goes for any aliens, ghosts, ghouls, zombies, and whatnot.  If you're still worried about the dogs, even after the preceding paragraph, I promise to keep 'em inside.  Come on down, and bring your friends.  It'll be a party.  I hope you don't mind if I take pics, though.  After all my disparaging comments about anecdotal evidence, you can't blame me for wanting something more concrete.