Maybe I need to get myself a metal detector.

The reason I say this is that it's apparently an auspicious time for treasure hunters, at least judging by two discoveries I found out about (once again!) from my friend and fellow writer Gil Miller, without whom in the last couple of weeks I wouldn't have had much to write about here.

The first one was a discovery in Norway made by an amateur treasure hunting enthusiast, using his newly-purchased metal detector for the first time (maybe there's something to beginner's luck after all...).  The fortunate fellow is named Ole Ginnerup Schytz, and I have to point out that (1) no, I am not making this name up, and (2), yes, this is from a reputable source, specifically the National Museum of Denmark.

In any case, the discovery, made a couple of months ago near the town of Jelling but only announced recently, is absolutely stupendous.  It's a collection of gold artifacts dating from the Danish Iron Age, about seventh century C.E.  It consists primarily of bracteates -- rune-decorated medallions thought to have not only a decorative but a magical purpose.  This new collection has bracteate designs the archaeologists say they've never seen before.

"It is the symbolism represented on these objects that makes them unique, more than the quantity found," explained Mads Ravn, director of research at the Vejle Museum.

As far as Schytz, he was as stunned as everyone else by his discovery.  "When the device activated, I knelt down and found a small, bent piece of metal," he said.  "It was scratched and covered in mud.  I had no idea, so all I could think of was that it looked like the lid of a can of herring." 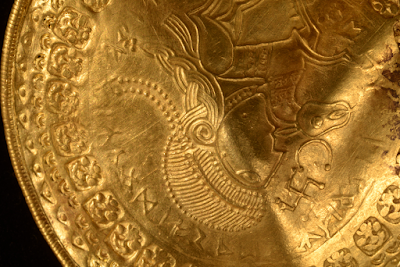 One of the bracteates from the Jelling cache
"It was the epitome of pure luck," Schytz said.  "Denmark is 43,000 square kilometers, and then I happen to choose to put the detector exactly where this find was."
One thing I find fascinating about the discovery is that it contained gold coins from the Roman Empire that had been converted into jewelry, and a medallion depicting Constantine the Great (ruler of the Eastern Roman Empire from 306 to 337 C.E.).  So even though the cache seems to have been buried in the seventh century, some of the artifacts are a good three hundred years older than that.  Jelling, apparently, was the center of trade back then -- including trade from over two thousand kilometers away.
The second discovery was made on the other side of the world, in Colombia.  Recently archaeologists discovered a trove of gold and emeralds, filling eight ceramic jars of a type made by the Muisca people, an indigenous group known for their find goldsmithing (and who may have inspired the legend of the city of El Dorado).  The jars are thought to have been buried about six centuries ago, but this is much less certain than the Jelling cache's date, because there were no obvious historical benchmarks here as there were in Denmark. 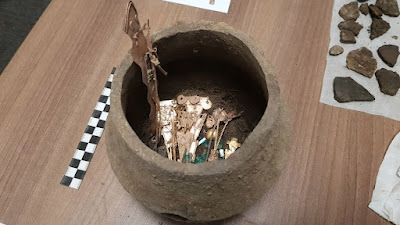 One of the jars from the Muisca site
A lot of the pieces from this discovery are figurines in the shape of snakes and other animals, as well as people wearing headdresses and carrying staffs and weapons.  This has prompted the leader of the team which made the discovery, Francisco Correa, to conclude that the site may have been associated with the worship of ancestor spirits and animal totems.
In any case, both the Danish and the Colombian find are staggeringly precious, not just because of the monetary value of the gold and jewels, but because of what it tells us about the cultures that created these beautiful pieces.  So like I said, if you believe in auspices, maybe it's time to go out and get yourself a metal detector.
I probably won't bother.  Not only do I not believe in strings of good fortune, I don't think there's any gold buried around here.  About the only use I've seen people make of metal detectors in this area is sweeping the village fairgrounds after the annual fair wraps up, looking for lost pocket change.
And frankly, I don't think the return on that investment would be enough to justify the time and expense.
*************************************
Like graphic novels?  Like bizarre and mind-blowing ideas from subatomic physics?
Have I got a book for you.
Described as "Tintin meets Brian Cox," Mysteries of the Quantum Universe is a graphic novel about the explorations of a researcher, Bob, and his dog Rick, as they investigate some of the weirdest corners of quantum physics -- and present it at a level that is accessible (and extremely entertaining) to the layperson.  The author Thibault Damour is a theoretical physicist, so his expertise in the cutting edge of physics, coupled with delightful illustrations by artist Mathieu Burniat, make for delightful reading.  This one should be in every science aficionado's to-read stack!
[Note: if you purchase this book using the image/link below, part of the proceeds goes to support Skeptophilia!]