There's been a lot of buzz lately about the Earth's impending magnetic field reversal.

Well, the alleged impending magnetic field reversal.  We don't know for sure that one is imminent; it's the same sort of thing as when you hear that the Yellowstone Supervolcano is "overdue for an eruption."  Neither of these is on some kind of timetable.  You rarely hear volcanoes say, "Well, I'd love to visit, but I'm supposed to erupt at 3:34 PM today, and I can't afford to be late."

The magnetic field flip is even more irregular than supervolcano eruptions, at least to judge by the geological record.  We know reversals have happened by looking at (relatively) new igneous rock formations near the Mid-Atlantic Ridge; as the lava cools, magnetic particles in the molten rock freeze into place, locking in a magnetic signature that tells you what the Earth's magnetic field was doing at the time.  And if you do a scan across the Mid-Atlantic Ridge you find mirror-image parallel stripes along the ridge, progressively older as you move away, documenting 183 reversals over the past 83 million years.  The timing of those reversals, however -- and therefore the width of the stripes -- varies tremendously, from about 25,000 years to about ten million years (the longest stable interval discovered so far).

[Image is in the Public Domain courtesy of NOAA]

As a quick aside, you may know that these magnetic stripes were one of the most persuasive arguments for the developing theory of plate tectonics, back in the late 1950s and early 1960s.  The mid-ocean ridges were identified as divergent zones -- places where the plates were moving apart, and new rock upwelling to fill the space in between.

In any case, we don't know for sure if the Earth's field is ready to flip, but it certainly seems to be wandering around a bit.  The last full reversal was about 780,000 years ago, but there was what seems to have been an abortive flip -- the Laschamps Event -- about 41,400 years ago, which only lasted about five hundred years before flipping back to its original polarity.  (Because of the speed of the switch, geologists don't consider this to be a full geomagnetic reversal, but a "geomagnetic excursion," where the poles didn't make a long-term move but just kind of went on walkabout.)

In fact, the Laschamps Event is why the whole topic comes up.  Recently a paper was published in Science describing what scientists have learned from an unexpected source -- the sixty-ton trunk of a kauri tree (Agathis australis) that was accidentally unearthed in New Zealand by some workers breaking ground for a new power plant.  The tree trunk had been submerged in a bog and preserved, and as luck would have it, the tree's 1,700 year life span was right across the Laschamps Event.

Specifically, they looked at the content of carbon-14 in the wood; C-14 is a radioactive form of carbon that is best-known for its role in the dating of preserved organic matter, but also is a good indicator of the level of cosmic ray bombardment (because it's formed when stratospheric carbon dioxide is hit by ionizing radiation).

What they found is a little alarming.  During the Laschamps Event the magnetic field of the Earth collapsed for something like five centuries, and the tree rings during that time show a significant spike in carbon-14 formation.  The level of bombardment, the researchers say, would have caused auroras in the subtropics -- and would have been sufficient to knock out the power grid.

Right around the same time, there were some significant biological shifts going on.  Large mammals in Australia died out, including the terrifying giant clawed wombat, Palorchestes. 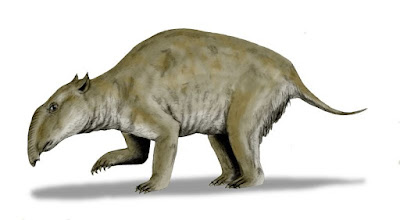 In case you thought I was making this up. This thing got up to three meters from nose to tail and weighed an estimated 1,000 kilograms. [Image licensed under the Creative Commons Nobu Tamura, Palorchestes BW, CC BY 3.0]

At around the same time, Neanderthals disappeared from Europe, and things got a good bit colder -- our ancestors started taking up residence in caves, to judge by the appearance of sophisticated cave art.  Whether any or all of this is connected to the Laschamps Event, however, is unknown.

What seems certain is that if it were to occur today, it would be bad news for technology.  Not only would the flip wreak havoc on our power grid, it would foul up a lot of navigational systems.  (I wonder how birds would be affected, since many of them rely on magnetic field lines to guide their migration twice a year.)

As with all of these sorts of things, there are some people who are Chicken-Littling about the pole reversal spelling the death of humanity, and others who are shrugging and saying we'll be fine because this has happened many times in Earth's history, and here we are.  Well, yeah, giant meteor strikes and flood basalt events and ice ages have also happened many times in Earth's history, but that doesn't mean they're a good thing.

My own response is that we shouldn't panic, but we should try to prepare for it if and when it happens, i.e., listen to the damn scientists.  Which I've said about a million times before, mostly in connection to climate change and the COVID-19 vaccine, but it seems like good advice in general.