In the 1992 Winter Olympics, there was an eighteen-year-old French figure skater named Laëtitia Hubert. She was a wonderful skater, even by the stratospheric standards of the Olympics; she'd earned a silver medal at the French National Championships that year.  But 1992 was a year of hyperfocus, especially on the women's figure skating -- when there were such famous (and/or infamous) names as Nancy Kerrigan, Tonya Harding, Kristi Yamaguchi, Midori Ito, and Surya Bonaly competing.

What I remember best, though, is what happened to Laëtitia Hubert.  She went into the Short Program as a virtual unknown to just about everyone watching -- and skated a near-perfect program, rocketing her up to fifth place overall.  From her reaction afterward it seemed like she was more shocked at her fantastic performance than anyone.  It was one of those situations we've all had, where the stars align and everything goes way more brilliantly than expected -- only this was with the world watching, at one of the most publicized events of an already emotionally-fraught Winter Olympics.

This, of course, catapulted Hubert into competition with the Big Names.  She went into the Long Program up against skaters of world-wide fame.  And there, unlike the pure joy she showed during the Short Program, you could see the anxiety in her face even before she stated.

She completely fell apart.  She had four disastrous falls, and various other stumbles and missteps.  It is the one and only time I've ever seen the camera cut away from an athlete mid-performance -- as if even the media couldn't bear to watch.  She dropped to, and ended at, fifteenth place overall.

It was simply awful to watch.  I've always hated seeing people fail at something; witnessing embarrassing situations is almost physically painful to me.  I don't really follow the Olympics (or sports in general), but nearly thirty years later, I still remember that night.  (To be fair to Hubert -- and to end the story on a happy note -- she went on to have a successful career as a competitive skater, earning medals at several national and international events, and in fact in 1997 achieved a gold medal at the Trophée Lalique competition, bumping Olympic gold medalist Tara Lipinski into second place.)

I always think of Laëtitia Hubert whenever I think of the phenomenon of "choking under pressure."  It's a response that has been studied extensively by psychologists.  In fact, way back in 1908 a pair of psychologists, Robert Yerkes and John Dillingham Dodson, noted the peculiar relationship between pressure and performance in what is now called the Yerkes-Dodson curve; performance improves with increasing pressure (what Yerkes and Dodson called "mental and physiological arousal"), but only up to a point.  Too much pressure, and performance tanks.  There have been a number of reasons suggested for this effect, one of which is that it's related to the level of a group of chemicals in the blood called glucocorticoids.  The level of glucocorticoids in a person's blood has been shown to be positively correlated with long-term memory formation -- but just as with Yerkes-Dodson, only up to a point.  When the levels get too high, memory formation and retention crumbles.  And glucocorticoid production has been found to rise in situations that have four characteristics -- those that are novel, unpredictable, contain social or emotional risks, and/or are largely outside of our capacity to control outcomes.

Which sounds like a pretty good description of the Olympics to me.

What's still mysterious about the Yerkes-Dodson curve, and the phenomenon of choking under pressure in general, is how it evolved.  How can a sudden drop in performance when the stress increases be selected for?  Seems like the more stressful and risky the situation, the better you should do.  You'd think the individuals who did choke when things got dangerous would be weeded out by (for example) hungry lions.

But what is curious -- and what brings the topic up today -- is that a study just published this week in Proceedings of the National Academy of Sciences showed that humans aren't the only ones who choke under pressure.

In a clever set of experiments led by Adam Smoulder of Carnegie Mellon University, researchers found that giving monkeys a scaled set of rewards for completing tasks showed a positive correlation between reward level and performance, until they got to the point where success at a difficult task resulted in a huge payoff.  And just like with humans, at that point, the monkeys' performance fell apart.

The authors describe the experiments as follows:

Monkeys initiated trials by placing their hand so that a cursor (red circle) fell within the start target (pale blue circle).  The reach target then appeared (gray circle with orange shape) at one of two (Monkeys N and F) or eight (Monkey E) potential locations (dashed circles), where the inscribed shape’s form (Monkey N) or color (Monkeys F and E) indicated the potential reward available for a successful reach.  After a short, variable delay period, the start target vanished, cueing the animal to reach the peripheral target.  The animals had to quickly move the cursor into the reach target and hold for 400 ms before receiving the cued reward.

And when the color (or shape) cueing the level of the reward got to the highest level -- something that only occurred in five percent of the trials, so not only was the jackpot valuable, it was rare -- the monkeys' ability to succeed dropped through the floor.  What is most curious about this is that the effect didn't go away with practice; even the monkeys who had spent a lot of time mastering the skill still did poorly when the stakes were highest.

So the choking-under-pressure phenomenon isn't limited to humans, indicating it has a long evolutionary history.  This also suggests that it's not due to overthinking, something that I've heard as an explanation -- that our tendency to intellectualize gets in the way.  That always seemed to make some sense to me, given my experience with musical performance and stage fright.  My capacity for screwing up on stage always seemed to be (1) unrelated to how much I'd practiced a piece of music once I'd passed a certain level of familiarity with it, and (2) directly connected to my own awareness of how nervous I was.  I did eventually get over the worst of my stage fright, mostly from just doing it again and again without spontaneously bursting into flame.  But I definitely still had moments when I'd think, "Oh, no, we're gonna play 'Reel St. Antoine' next and it's really hard and I'm gonna fuck it up AAAAUUUGGGH," and sure enough, that's when I would fuck it up.  Those moments when I somehow prevented my brain from going into overthink-mode, and just enjoyed the music, were far more likely to go well, regardless of the difficulty of the piece. 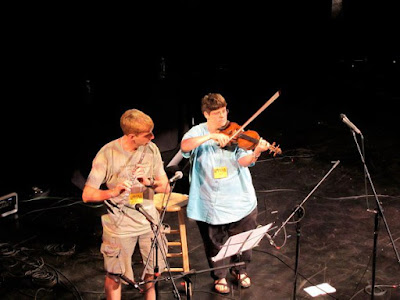 One of my more nerve-wracking performances -- a duet with the amazing fiddler Deb Rifkin on a dizzyingly fast medley of Balkan dance tunes, in front of an audience of other musicians, including some big names (like the incomparable Bruce Molsky).  I have to add that (1) I didn't choke, and (2) Bruce, who may be famous but is an awfully nice guy, came up afterward and told us how great we sounded.  I still haven't quite recovered from that moment.

As an aside, a suggestion by a friend -- to take a shot of scotch before performing -- did not work.  Alcohol didn't make me less nervous, it just made me sloppier.  I have heard about professional musicians taking beta blockers before performing, but that's always seemed to me to be a little dicey, given that the mechanism by which beta blockers decrease anxiety is unknown, as is their long-term effects.  Also, I've heard more than one musician describe the playing of a performer on beta blockers as "soulless," as if the reduction in stress also takes away some of the intensity of emotional content we try to express in our playing.

Be that as it may, it's hard to imagine that a monkey's choking under pressure is due to the same kind of overthinking we tend to do.  They're smart animals, no question about it, but I've never thought of them as having the capacity for intellectualizing a situation we have (for better or worse).  So unless I'm wrong about that, and there's more self-reflection going on inside the monkey brain than I realize, there's something else going on here.

So that's our bit of curious psychological research of the day.  Monkeys also choke under pressure.  Now, it'd be nice to find a way to manage it that doesn't involve taking a mood-altering medication.  For me, it took years of exposure therapy to manage my stage fright, and I still have bouts of it sometimes even so.  It may be an evolutionarily-derived response that has a long history, and presumably some sort of beneficial function, but it certainly can be unpleasant at times.