In today's contribution from the Completely Useless Advice department: if you own property in southern Africa, you might want to consider selling it some time in the next ten million years or so.
The reason I say this is because of a paper published a couple of months ago in Nature Geoscience that was once again thrown my way by my pal Gil Miller, who seems to have an inordinate talent at ferreting out truly fascinating stuff I hadn't heard about.  The paper is entitled "A Tree of Indo-African Mantle Plumes Imaged by Seismic Tomography," by Maria Tsekhmistrenko, Karin Sigloch, and Kasra Hosseini (of Oxford University), and Guilhem Barruol (of the Université de Paris), and describes the structure of the mysterious "hotspots" -- upwelling of extremely hot magma from deep in the mantle -- that are responsible for such volcanically-active regions as Hawaii, Yellowstone, and Réunion Island.
These hotspots have long puzzled geologists, because they are quite distant from tectonic plate boundaries, where most of the world's seismic and volcanic activity occurs.  Hawaii is the best-studied hotspot; it was one of the most powerful pieces of evidence of plate movement, back in the 1960s when the theory of plate tectonics was first being studied.  The Big Island of Hawaii is just the easternmost point in a chain that extends way beyond what we usually think of as the Hawaiian Islands; even the westernmost island that pokes up above sea level, Kure Atoll, isn't the end of it.  It continues into the Emperor Seamount Chain, which extends underwater all the way to the Kamchatka Peninsula of Siberia.
My long-ago geology professor described it as being like pulling a piece of fabric (the Pacific Plate) through an upside-down sewing machine (the Hawaiian Hotspot); the needle of the sewing machine punches regular holes upward through the fabric as it moves through, but the sewing machine itself stays in the same place.  The plates are moving; the hotspot isn't.  (And the angle in the chain of seamounts indicates that at some point in the past, the Pacific Plate changed direction, probably because of jostling against other plates.)

The Pacific Ocean floor, showing the Hawaiian-Emperor Seamount Chain [Image is in the Public Domain courtesy of NOAA]
What is still mysterious about hotspots is why they happen at all.  We have a pretty decent idea of why the activity along plate margins occurs -- strike-slip faults like the famous San Andreas, where two plates are moving along each other in opposite directions; trenches/subduction zones like Indonesia, where you get both powerful quakes and huge volcanoes; and mid-ocean ridges/divergent zones like the Mid-Atlantic Ridge, where plates are moving apart and new magma upwells to fill the gaps.  But why would there be a persistent chain of volcanoes out in the middle of a stable plate?
The current paper describes blobs of extremely hot magma originating from the lower parts of the mantle, which rise and then diverge into branches.  The authors write:

Mantle plumes were conceived as thin, vertical conduits in which buoyant, hot rock from the lowermost mantle rises to Earth’s surface, manifesting as hotspot-type volcanism far from plate boundaries.  Spatially correlated with hotspots are two vast provinces of slow seismic wave propagation in the lowermost mantle, probably representing the heat reservoirs that feed plumes...  Using seismic waves that sample the deepest mantle extensively, we show that mantle upwellings are arranged in a tree-like structure.  From a central, compact trunk below ~1,500 km depth, three branches tilt outwards and up towards various Indo-Austral hotspots.  We propose that each tilting branch represents an alignment of vertically rising blobs or proto-plumes, which detached in a linear staggered sequence from their underlying low-velocity corridor at the core–mantle boundary.  Once a blob reaches the viscosity discontinuity between lower and upper mantle, it spawns a ‘classical’ plume-head/plume-tail sequence.

So the Réunion Hotspot is apparently connected to the East African Rift Zone, three-thousand-odd kilometers away.  The EARZ is a developing rift that is ultimately going to shear off the "Horn of Africa," opening a new ocean and creating a new "microcontinent" made up Somalia and bits of Ethiopia, Kenya, and Tanzania.  (As an aside, it's also the site of Olduvai Gorge, where some of the earliest hominin fossils were found.) 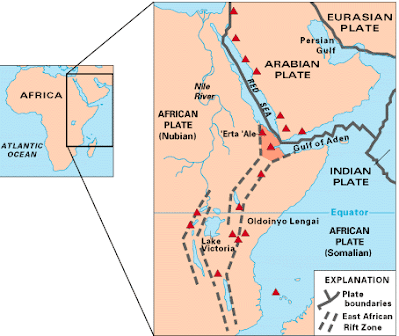 [Image is in the Public Domain courtesy of the USGS]
"From looking at the core-mantle boundary, you can maybe predict where the oceans will open,” said study co-author Karin Sigloch.  "If the new models are accurate, a few tens of millions of years from now, you may not want to be in South Africa — or, perhaps, on planet Earth at all."
The reason Sigloch says this is that the team's analysis of the "tree" of magma that underlies both Réunion and the EARZ suggests that it's in the process of forming another branch -- another mantle plume -- that will ultimately end up underneath what is now South Africa.  "In tens of millions of years, a blob of nightmarishly gargantuan proportions will pinch off from the central cusp," Sigloch said, in an interview with Quanta magazine.  "This would produce cataclysmic eruptions.  The Deccan Traps [one of the largest volcanic eruptions ever, and which probably contributed to the extinction of the non-avian dinosaurs 66 million years ago] were caused by what we would think of as a solitary mantle plume.  This future mega-blob, though, would be capable of producing volcanism so prolific and extensive that the Deccan Traps would be a firecracker in comparison."
Pretty scary.  But like I said, if you want to visit South Africa, or if you live there, you still have a ten-million-year window to take care of business.  What's interesting from a geological perspective is that up till now, South Africa has been very stable tectonically.  The majority of the country is made of extremely old rock, what geologists call a "craton" -- a chunk of some of the oldest continents on Earth.  A massive flood basalt eruption, like the Deccan Traps, the Columbia River Flood Basalts, and the largest of them all -- the Siberian Traps, implicated in the cataclysmic Permian-Triassic Extinction -- would (literally) overturn three billion years of stable geology, with catastrophic results for the entire planet.
So yeah.  That's cheerful.  But since we have ten million years before we have anything serious to worry about, it'd be better if to turn your attention to more pressing concerns, even if you live in Johannesburg.  Like what we're doing to destroy the global ecosystem our own selves by our seeming commitment to burn every last gallon of fossil fuels out there, damn the climate, full speed ahead, and which could make the Earth pretty close to uninhabitable a great deal sooner.
Which now that I think of it, isn't all that reassuring.
*************************************
Like graphic novels?  Like bizarre and mind-blowing ideas from subatomic physics?
Have I got a book for you.
Described as "Tintin meets Brian Cox," Mysteries of the Quantum Universe is a graphic novel about the explorations of a researcher, Bob, and his dog Rick, as they investigate some of the weirdest corners of quantum physics -- and present it at a level that is accessible (and extremely entertaining) to the layperson.  The author Thibault Damour is a theoretical physicist, so his expertise in the cutting edge of physics, coupled with delightful illustrations by artist Mathieu Burniat, make for delightful reading.  This one should be in every science aficionado's to-read stack!
[Note: if you purchase this book using the image/link below, part of the proceeds goes to support Skeptophilia!]