Mapping out a fraud

Ever heard of the Vinland Map?

Supposedly dating from the fifteenth century, this map shows the outlines of Europe, Greenland, Asia, Africa... and North America, which is labeled "Vinland Insula" (the island of Vinland).  The map surfaced in 1957, and was widely hailed as a genuine depiction of the Norse exploration of northeastern North America, drawn using information gathered as far back as the tenth century C.E.

Interestingly, the map surfaced three years before the discovery of the (authentic) Viking-era archaeological site at L'Anse-aux-Meadows, Newfoundland, the first (and at this point, only) certain Norse site in North America.  When tenth-century Norse artifacts were found there in 1960, it bolstered the claims that the map was genuine.  We know the Vikings made it to "Vinland," as per the stories of Leif Eiriksson and Thorfinn Karlsefni, and the Map seemed to indicate they'd made it a lot farther, possibly to what is now coastal New England and points south.

Very quickly, it became the center of a lot of wilder claims.  Ancient Aliens aficionados said that not only did it show that the Norse had visited North America and surveyed it closely enough to get a lot of the details of the coastline correct, it contained enough information to support that the drawing had been made from a higher vantage point -- i.e., from the air.  In a spaceship.  Because the Norse gods were actually Ancient Astronauts.

Even the less up-in-the-stratosphere claims were given substantial momentum by the Vinland Map.  I remember when I was working on my master's thesis -- about the effects of the Viking invasions on the Old English and Old Gaelic languages -- running into an apparently serious study purporting to find evidence of borrow-words from Old Norse into various Algonkian languages, including Malecite, Abenaki, and Mi'kmaq.  The difficulty with this sort of thing is in determining whether pairs of similar words from otherwise unrelated languages are related genetically (i.e. from a common root) or are just chance correspondences; in fact, that was one of the more difficult parts of my own research.  Sometimes it's obvious, but that's the exception.  An example is the English word window -- the Old English word was eagþyrl and the Norse word at the same time was vindauga.

Doesn't take a linguist to figure that one out.

Most, however, are not that clear-cut, and it takes more evidence than "they sound kind of the same" to establish a genetic connection.  And the vast majority of linguists think that any similarities between Norse words and Algonkian words are chance -- and cherry-picking.  You can find those sorts of accidental correspondences between just about any two languages you pick if you're allowed to ignore all the pairs of words that don't sound alike.

In any case, the Vinland Map was considered support for the contention that the Vikings did get south of L'Anse-aux-Meadows, whether or not they left linguistic and/or archaeological traces.  This claim gained some credence when a physicist tested the parchment of the Map back in 1995 and found that it dated somewhere between 1432 and 1445, exactly as advertised.

Unfortunately, the age of the parchment is irrelevant -- because a study published last week by some researchers at Yale University, where the map is housed, found that beyond question, the Vinland Map is a fake. 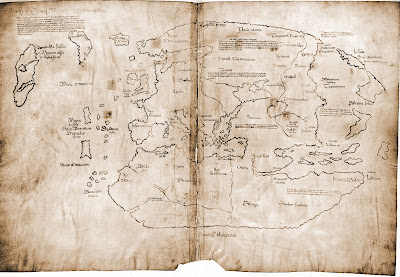 The researchers were able to do an analysis of the ink used on the Map without destroying it, and found that it is unquestionably modern ink.  It contains anatase, a form of titanium dioxide first used in inks in the 1920s.  Also, it was discovered that one of the inscriptions on the map had been overwritten to appear as if it was a bookbinder's instructions to assemble the map pages in concordance with the Speculum Historiale, a thirteenth-century encyclopedia intended as a compendium of everything known to the intelligentsia of Europe at the time.

"The Vinland Map is a fake," said Raymond Clemens, curator of early books and manuscripts at Yale’s Beinecke Rare Book and Manuscript Library.  "There is no reasonable doubt here. This new analysis should put the matter to rest...  The altered inscription certainly seems like an attempt to make people believe the map was created at the same time as the Speculum Historiale.  It’s powerful evidence that this is a forgery, not an innocent creation by a third party that was co-opted by someone else, although it doesn’t tell us who perpetrated the deception."

My first response to reading this was to get really pissed off.  Not only does this claim have significant bearing on the subject of my own research, it muddies the waters considerably with respect to any legitimate claims that the Norse reached mainland North America.  Historical linguistics is hard enough; having some asshole create a highly-plausible fake -- good enough that it took sophisticated ink analysis to detect it -- makes it more difficult for those of us who just want to know what really happened.
Fakes in general really make me see red.  We already have the natural biases all humans come equipped with (confirmation bias, correlation/causation errors, and dart-thrower's bias, particularly) gumming up the works even for reputable scientists who are trying their hardest to see things clearly.  It may seem like a minor concern -- who really cares if a particular old document is genuine?  But truth matters, even if it's an argument about what might seem like academic trivia.
Or it should matter.  What's most troubling about this is that whoever created the Vinland Map evidently knew what (s)he was doing, and knew the subject well enough to fool historians for over fifty years.  (Well, some historians -- there were researchers who doubted it pretty much from the get-go.)  So the great likelihood is whoever perpetrated this fake was an academic him/herself.
And to me, that's unconscionable.
So that's our disappointing piece of news for the day.  It still seems pretty likely to me that the Norse did make it to mainland North America, but even if I'm right we're back to having zero hard evidence.  I guess I'm lucky that I chose the thesis research I did; there's no doubt the Vikings made it to Britain.  The monks at Lindisfarne would have been happy to tell you all about it.

At least the ones who survived.
*********************************
My friends know, as do regular readers of Skeptophilia, that I have a tendency toward swearing.
My prim and proper mom tried for years -- decades, really -- to break me of the habit.  "Bad language indicates you don't have the vocabulary to express yourself properly," she used to tell me.  But after many years, I finally came to the conclusion that there was nothing amiss with my vocabulary.  I simply found that in the right context, a pungent turn of phrase was entirely called for.
It can get away with you, of course, just like any habit.  I recall when I was in graduate school at the University of Washington in the 1980s that my fellow students were some of the hardest-drinking, hardest-partying, hardest-swearing people I've ever known.  (There was nothing wrong with their vocabularies, either.)  I came to find, though, that if every sentence is punctuated by a swear word, they lose their power, becoming no more than a less-appropriate version of "umm" and "uhh" and "like."
Anyhow, for those of you who are also fond of peppering your speech with spicy words, I have a book for you.  Science writer Emma Byrne has written a book called Swearing Is Good for You: The Amazing Science of Bad Language.  In it, you'll read about honest scientific studies that have shown that swearing decreases stress and improves pain tolerance -- and about fall-out-of-your-chair hilarious anecdotes like the chimpanzee who uses American Sign Language to swear at her keeper.
I guess our penchant for the ribald goes back a ways.
It's funny, thought-provoking, and will provide you with good ammunition the next time someone throws "swearing is an indication of low intelligence" at you.
[Note: if you purchase this book using the image/link below, part of the proceeds goes to support Skeptophilia!]