I thought I'd have a little fun with this week's Fiction Friday, and throw some word puzzles at you.  It may stretch the definition of Fiction Friday, but oh well.
It's my blog and I'll do what I like.

When I was in high school -- so, many years ago (how many is left as an exercise for the reader) -- my English teacher, Ms. Reinhardt, gave us a set of puzzles: familiar sayings, aphorisms, and clichés in unfamiliar guise.  Amazingly enough, I kept my copy all these years, and just ran across it this evening while searching for something else. 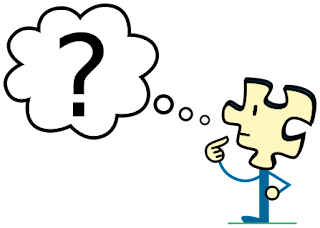 [Image licensed under the Creative Commons Wikimedia Foundation, Puzzly puzzled, CC BY-SA 3.0]
I don't know what their origin is -- I don't think she made them up -- but wherever they're from, they're cool brain-teasers.  (And if anyone does know the source, let me know so I can credit them properly.)  How many of them can you figure out?

1. A lithoid form, whose onward course
Is shaped by gravitational force
Can scarce enjoy the consolation
Of bryophytic aggregation.
2. To carry haulm of cereal growth
The tylopod is nothing loath;
But just one haulm too many means
That dorsal fracture supervenes.
3. When, nimbus-free, Sol marches by
Across the circumambient sky,
To graminiferous meads repair --
Your instant task awaits you there!
4. There is no use in exhortation
To practice equine flagellation,
If vital forces did depart
And still the breath, and cease the heart.
5. That unit of the avian tribe
Whose movements one can circumscribe
In manu, as a pair will rate
Subarborially situate.
6. For none who claims to represent
The Homo species sapient,
Will loiter Einstein's fourth dimension
Or sea's quotidian declension.
7. Faced with material esculent
As source of liquid nourishment
Avoid excess; 'twill but displease
Of culinary expertise.
8. Conducting to the watering place
A quadruped of equine race
Is simple; but he may not care
To practice imbibition there.

9. The coroner observed: "Perpend,
The death of this, our feline friend,
Reflects preoccupation shown
With business other than his own."

10. Of little value his compunctions
Who executes clavigerous functions,
When once from circumambient pen
Is snatched its equine denizen.

Have fun!  (And drop me an email if you want a hint or get stumped and are desperate for answers.)