A friend of mine asked me yesterday if I'd ever heard of a "flux thruster atom pulser."  I said, "You mean, like in Back to the Future?"

He said, "No, that's a flux capacitor."  And he gave me a link to a site called Rodin Aerodynamics.

"You may want to wear a helmet while reading it," he said.  "It'll protect your skull when you faceplant."

Indeed, the site did not disappoint, and I was put on notice in the first paragraph:

Within, you will be taken on a spiraling tour through the toroidal roller coaster of our deterministic universe.  Dark Matter, the vibratory essence of all that exists, is no longer on its elusive hide and seek trip -- it has been found!  With the introduction of Vortex-Based Mathematics you will be able to see how energy is expressing itself mathematically.  This math has no anomalies and shows the dimensional shape and function of the universe as being a toroid or donut-shaped black hole.  This is the template for the universe and it is all within our base ten decimal system...  You have entered a place where Numbers Are Real And Alive and not merely symbols for other things.

So, we live in a giant space donut composed of dark matter, and 125.7 is a living entity.  Wheeee!  We are certainly off to a good start, aren't we? 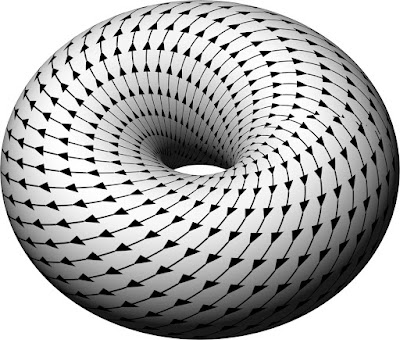 [Image licensed under the Creative Commons RokerHRO, Torus vectors oblique, CC BY-SA 3.0]
The originator of the idea is allegedly a fellow named Marko Rodin, although I could find no independent corroboration of this -- as far as I could tell, Rodin seems not to exist except on this site and others that reference it.

The mysterious Rodin, however, has had quite a life:

At the age of fifteen Marko Rodin projected his mind as far as he could across the universe and asked the question, "What is the secret behind intelligence?"  Due to his gift of intense focus or because it was time for him to know the answer, his stomach muscles turned to iron and as he was literally lifted forward he answered out loud, "I understand."  What he had gleaned from his query was that all intelligence comes from a person's name.  This led him to understand that not only do our personal names and the language they are spoken in highly affect our personalities but that the most important names are the names of God.

I wish I'd known when I was fifteen that all I had to do to get rock-hard abs was ask a vague philosophical question.

Anyhow, what intelligence did Rodin glean from his trip, and the contemplation of his name?  Well, here are a few gems of wisdom he brought back:
These represent just the ones I could read without my brain exploding, because a lot of Rodin's "ideas" are completely incomprehensible.  A couple of these will suffice:
A lot of his pronouncements sound like that -- a bunch of fancy-sounding words strung together that basically don't mean anything.

He goes on to mess about with number patterns, but brings in the Yin/Yang, the Mathematical Fingerprint of God, and Aetheric Flux Monopole Emanations.  What are those, you might ask?  You might be sorry you did:

Aetheron Flux Monopole Emanations, or Aetherons, are linear Emanations of quasi-mass/energy, traveling in a straight line from the center of mass outwards.  They radiate in phased-array from the Aeth Coalescence (the central essence of God).  The Aetheron Flux Monopole Emanations Rarefy the Diamond Tiles.  This rarefication [sic] is spread over the Torus Skin, creating Doubling Circuits and Nested Vortices.

Oh!  Right!  The "Dandelion Puff Principle."  I'd forgotten all about that, from my college physics classes.

Now, you might think that this is just some guy blathering on about how he will Revolutionize Physics despite the fact of having no scientific background whatsoever, and admittedly people like that are a dime a dozen.  But now Marko Rodin has been championed by noted wackmobile Jeff Rense.

Never heard of Rense? He is a conspiracy theorist par excellence, whose overall looniness quotient ranks him right up there with Richard C. Hoagland and Alex Jones.  But Rense compounds his bizarre view of the world with anti-Semitism and Holocaust denial, which moves his ideas from the realm of the laughable to the completely odious.  He brags that his is the most "format and content-plagiarized site on the net," despite the fact that his most of his material seems to be outright lunacy.  (And even if you don't want to read any of his posts, you should at least go to his site to look at his profile photograph, in which he sports a mustache and a mane of flowing hair that in my eyes makes him look a little like an aging 70s porn star.)

So, anyway, that's today's Breakfast of Wingnuttery.  We live on a donut made of dark matter and numbers, and the whole thing is caused by invisible particles emanating from the Essence of God.  Oh, yeah, and despite what your math teacher told you, pi is a whole number, something I remember trying to convince my seventh grade math teacher of, many years ago.  "Can't we just call it '3' and be done with it?", I recall saying.  If only I'd known how many years ahead of my time I was, I could have dropped out of school and beat Rodin to the punch, and invented my own "flux thruster atom pulser" so I could "go anywhere in the universe."  Think of how impressed the aliens would have been, especially given my rock-hard abs.