I was driving to work a couple of days ago, listening to classical music on satellite radio, and I heard Ferde Grofé's Grand Canyon Suite. 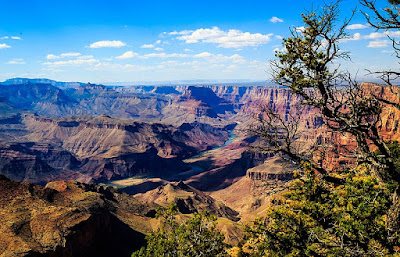 [Image licensed under the Creative Commons Lennart Sikkema, Canyon River Tree (165872763), CC BY 3.0]
Pretty cool piece of music, but to me the fifth and final movement is something really special.  It's called "Cloudburst" and is a musical depiction of a thunderstorm in the desert.

And the thought occurred to me that you don't need words to tell a story, which I thought would be an interesting topic for this week's Fiction Friday.  Grofé gives us a picture in sounds -- the approach of the storm, lightning, thunder, wind -- then its subsidence (and just like in a real storm, afterward you can still hear the thunder in the distance as it recedes).
This is a pretty well-known piece of music, and is far from the only one that tells a story using music.  Another famous one is Saint-Saëns's Danse Macabre, depicting the devil playing the fiddle and summoning the dead to dance in the cemetery (xylophones for the bones knocking together!).  Listen at the end for the church bells ringing in the distance to signal the sunrise, and the little musical shiver the devil gives when he knows the day is coming -- followed by a sad, mournful violin solo.  But then, the last few notes seem to promise that he'll be back once night falls again.

Beethoven drew his inspiration from stories as well, and I'm not only thinking of pieces like the Pastoral Symphony.  Check out this amazing performance of his piano solo Rondo a Capriccio: Rage Over a Lost Penny.  (All I can say is that if losing a penny made me come up with tunes like this, I'd be flinging coins all over the place.)

One of my favorite musical depictions is from the incredibly prolific American composer Alan Hovhaness.  His Symphony #50 (he wrote 67 of them, and about 450 other sorts of pieces) is subtitled Mount Saint Helens.  Listen to it -- if that's not a musical version of a volcanic eruption, I don't know what is.

Jean Sibelius wrote a lot of music based upon Finnish folk tales, myths, and legends, but to me none gives as vivid a picture as "Lemminkainen's Return" from the Kalevala Suite.  Lemminkainen is a folk hero, and the piece depicts his triumphant return to his home after a long adventure.  It gallops along, and you can almost see the hero with his long hair flying in the wind, riding his horse through a snowstorm.

One of the funniest pieces in classical music -- once you know the story it's telling -- is Sergei Prokofiev's brilliant Lieutenant Kije Suite.  The story behind it is that during an inspection of a military regiment by the Tsar, he was reviewing the roster and saw that someone had scribbled in the word "Kije" (Russian for "thingamajig"), and mistakenly thought it was the name of a soldier.  No one wanted to correct the Tsar, so they invented a Lieutenant Kije, and waxed rhapsodic about his exploits and bravery, along with romantic vignettes of his courtship of, and eventual marriage to, a beautiful young lady.  But they overdid it -- so much that the Tsar decided that he needed to meet this exemplary military man and paragon of virtue.  Cornered, the leaders of the regiment had to invent a heroic death in battle for Kije so the Tsar wouldn't uncover the deception.

I'll end with one of my favorite pieces, the stunning suite Firebird by Igor Stravinsky.  It tells of the magical Firebird, half bird and half human, who is captured by the heroic Prince Ivan.  She gives him one of her feathers, and tells him he can use it to defeat the evil sorcerer King Katschei.  Katschei keeps his soul hidden in an egg in a casket and thinks he's immortal because of it (shades of J. K. Rowling's horcruxes).  But using the magic of the feather, Ivan forces Katschei and his minions to dance themselves to exhaustion.  He then finds the egg and destroys it, killing Katschei and freeing all of the people he'd magically enslaved -- including the young woman Ivan is in love with.  The end is one of the most joyful, stirring, triumphant pieces of music ever written.


So that's a few of my favorite stories in music.  I hope you enjoyed listening.  What are your favorites?
*************************************
Like graphic novels?  Like bizarre and mind-blowing ideas from subatomic physics?
Have I got a book for you.
Described as "Tintin meets Brian Cox," Mysteries of the Quantum Universe is a graphic novel about the explorations of a researcher, Bob, and his dog Rick, as they investigate some of the weirdest corners of quantum physics -- and present it at a level that is accessible (and extremely entertaining) to the layperson.  The author Thibault Damour is a theoretical physicist, so his expertise in the cutting edge of physics, coupled with delightful illustrations by artist Mathieu Burniat, make for delightful reading.  This one should be in every science aficionado's to-read stack!
[Note: if you purchase this book using the image/link below, part of the proceeds goes to support Skeptophilia!]