This week's Fiction Friday bounces off a question I was asked recently about how I choose names for my characters.  It's an interesting question, and one for which I have no ready answer, which of course won't stop me from burbling on about it for a while.
Most of the time, characters in my stories seem to come with their names pre-assigned.  I know that's not literally true -- but that's what it feels like.  One of the main characters of my work-in-progress, In the Midst of Lions, is named Mary Hansard.  Why?  Beats me. That's just who she is.  It's hard for me to imagine Mary with any other name.
As a brief aside, Mary Hansard is also one of those odd instances when a character kind of waltzes in from offstage and more or less takes over.  She wasn't in my first outlining of the story; but when some of the other characters are walking through a park and run into her, she tells them, "I've been waiting for you."  Why?  Who is she, and how did she know that the others -- who at the point are complete strangers -- would be there?  I was as taken aback by her sudden appearance as (I hope) my readers will be.  I honestly don't know where she came from, but she's turned into one of my favorite characters ever.
Sometimes writing seems more like "channeling" than it does like "inventing."
In any case, back to names.  I think they're pretty critical.  There's no way that the antagonist of C. S. Lewis' The Voyage of the Dawn Treader could have been quite as weaselly as he was had he not been named Eustace Clarence Scrubb.  Interesting, though, that when his character "reformed" -- and you may recall that he was the protagonist of The Silver Chair, and did quite a commendable job as the good guy -- they started calling him "Scrubb" instead of "Eustace."  "Scrubb," while not a last name I would choose, sounds kind of gruff and hale-fellow-well-met, as opposed to "Eustace," which it's hard to say without whining.  (My apologies to any Eustaces in the studio audience.)
I have only once that I recall completely changed a character's name mid-stream -- in my mytho-fantasy novel The Fifth Day.  The antagonist, who might be one of the most intense, tough-minded hard-asses I've ever written, started out as Tim Spillman.  My writing partner, the wonderful Cly Boehs -- with whom I've been meeting weekly for critique sessions for almost twenty years, and whose judgment I trust implicitly -- said the name just didn't work for the character.  It was too genteel.  And she was right.  Tim Spillman became Jackson Royce, and only when he had that name did he really take off as a character, hard-ass-wise.

Naming conventions in different genres can sometimes engender unintentional humor.  Character names in space-epic type science fiction often contain unpronounceable combinations of consonants, and usually involve apostrophes.  "Ah, my arch-enemy, G'filte of M'nshvitz Five!  It is I, your nemesis, Sh'l'mil of Oy'g'valt!"  Sword-and-sorcery fantasy novels usually rely more on accents, and quasi-Celtic sounding names:  "And then, Lünàavórne drew out the Sacred Sword Gínsü and raised it aloft, praying to Alávúnìël, the God of Random Diacritical Marks." 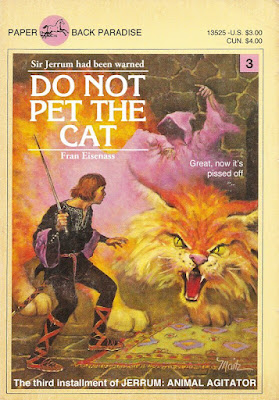 This cover is not my creation, but I wish it was.  It's from a cover-parody Twitter account called Paperback Paradise who you all must follow immediately.
And then there's romance novels, in which the guys usually have strong names with blatant sexual overtones, such as "Dirk Hardbody," and the women have names that sound like they came from the torrid dreams of a horny seventeenth-century English teenager.  A former member of a writers' group I belonged to was writing a contemporary romance about a perfectly ordinary (although of course drop-dead beautiful) American woman, and the main character was named -- I am not making this up -- "Royalle de Tremontaine."
Which brings up one of the funniest riffs Mystery Science Theater 3000 ever did -- "The Many Names of David Ryder," from the episode "Space Mutiny."  Do not, I repeat, do not try to drink anything while watching this.  You have been warned.
So, you can see that you can go a little off the deep end, character-name-wise.  I tend to keep it simple, unless I'm deliberately shooting for humorous effect.  It helps that I spent 32 years as a teacher, and each year I had about a hundred new sources for names.  (And if you take a look at some of the names of the villains in my novels, it might narrow down the guesses as to which students I disliked the most... heh-heh-heh.)

In any case, this is probably not much help, if you're a writer struggling with name choices.  So here are a few more down-to-earth recommendations:
So give it some thought.  Think about people you know, look in telephone directories and baby name books, and be creative.  Your characters deserve to have names that match their personalities -- don't underestimate the power that a wonderful, or abysmal, name choice will have on your readers' impressions of your story.
*********************************
My friends know, as do regular readers of Skeptophilia, that I have a tendency toward swearing.
My prim and proper mom tried for years -- decades, really -- to break me of the habit.  "Bad language indicates you don't have the vocabulary to express yourself properly," she used to tell me.  But after many years, I finally came to the conclusion that there was nothing amiss with my vocabulary.  I simply found that in the right context, a pungent turn of phrase was entirely called for.
It can get away with you, of course, just like any habit.  I recall when I was in graduate school at the University of Washington in the 1980s that my fellow students were some of the hardest-drinking, hardest-partying, hardest-swearing people I've ever known.  (There was nothing wrong with their vocabularies, either.)  I came to find, though, that if every sentence is punctuated by a swear word, they lose their power, becoming no more than a less-appropriate version of "umm" and "uhh" and "like."
Anyhow, for those of you who are also fond of peppering your speech with spicy words, I have a book for you.  Science writer Emma Byrne has written a book called Swearing Is Good for You: The Amazing Science of Bad Language.  In it, you'll read about honest scientific studies that have shown that swearing decreases stress and improves pain tolerance -- and about fall-out-of-your-chair hilarious anecdotes like the chimpanzee who uses American Sign Language to swear at her keeper.
I guess our penchant for the ribald goes back a ways.
It's funny, thought-provoking, and will provide you with good ammunition the next time someone throws "swearing is an indication of low intelligence" at you.
[Note: if you purchase this book using the image/link below, part of the proceeds goes to support Skeptophilia!]