The shrieking skulls of Calgarth

A couple of days ago, I was doing some genealogical research on the family of my Scottish grandmother, whose forebears mostly settled in Maryland and Pennsylvania, and I ran across records of an early Maryland settler (not a direct ancestor) named Matthew Howard.

The Howards intermarried with various members of the Iams family, which is a direct line of mine (yes, I'm a cousin of the pet food people), so I spent a few minutes glancing through what was known of Matthew Howard.  And I found that his grandfather was an English landholder named Miles Phillipson, of Calgarth, Westmoreland, England.

Something about those names rung a bell.  Being that at the time I was puttering about with genealogy, my mind was occupied with family history, so at first I thought I must have seen the name in some old record or another.  But something about that didn't ring right, and I kept thinking about it.  I had seen "Miles Phillipson of Calgarth" before, somewhere unrelated to genealogy, but I couldn't place where.  Finally, I googled it.

The first page of hits consisted of retelling after retelling of a famous story -- the tale of the screaming skulls of Calgarth.  That's where I'd seen the name before; decades ago, in a book with a title like Strange True Tales of the Supernatural, a genre which has graced my bookshelves since I was a teenager.

The story goes something like this.  Miles Phillipson was a wealthy landowner in sixteenth century England, and his property abutted a tract of land with a hill overlooking Lake Windermere.  This adjacent land belonged to a middle-aged couple named Kraster and Dorothy Cook, who (according to most versions of the legend) were simple, kind people.  Phillipson, however, was a greedy, mean, grasping sonofabitch, and he wanted the Cooks' property, but they refused to sell at any price.  Finally, he appeared to give up, and as a gesture of goodwill and no-hard-feelings, he invited the Cooks to dinner.  While there, Phillipson had one of his servants hide in Kraster Cook's satchel a valuable silver cup that Cook had admired earlier in the evening.  When the Cooks left, Phillipson "noticed" that the cup was gone, gave the alarm, and before the Cooks knew what was happening, they'd been arrested for theft of the cup (which, of course, was found in Kraster Cook's possession).

In due time, the Cooks were put on trial for theft, found guilty, and sentenced to death.

Oh, did I mention that Miles Phillipson was the county magistrate?

On the day of the execution, as Kraster and Dorothy were readied to be hanged, they were asked if they had any last words before the sentence was carried out.  Kraster shook his head, but Dorothy said, "Look out for yourself, Miles Phillipson.  You think you have done a fine thing.  But the tiny lump of land you lust for is the dearest a Phillipson has ever bought or stolen.  You will never prosper, nor any of your breed.  Whatever scheme you undertake will wither in your hand.  Whatever cause you support will always lose.  The time will come when no Phillipson will own an inch of land and while Calgarth walls shall stand, we will haunt it night and day.  You will never be rid of us!"
Now those are what I call kickass last words.

It is not recorded how Phillipson reacted to this, but given the rampant superstition of the time, I can only imagine that he wasn't particularly thrilled.  That didn't stop him, however, from seeing the Cooks both hanged, and taking their property, tearing down their cottage, and building himself a sumptuous manor house, which he named Calgarth Hall.

Of course, it wouldn't be a tale worth the telling if it stopped there.  Shortly after the completion of the manor, the members of the household were awakened one night by a horrifying shrieking.  Coming down into the great hall, from which the noise seemed to be coming, Phillipson and his family and servants saw two grinning skulls on the mantelpiece, screaming in an earsplitting fashion.  (Mrs. Phillipson, being an Elizabethan lady, of course "fainted dead away.")  The next day, Miles Phillipson, figuring he knew what was going on, had the coffins of Kraster and Dorothy Cook exhumed -- and unsurprisingly, found the skulls missing.  He replaced the skulls, and reburied the coffins, only to have the same thing occur the following week. 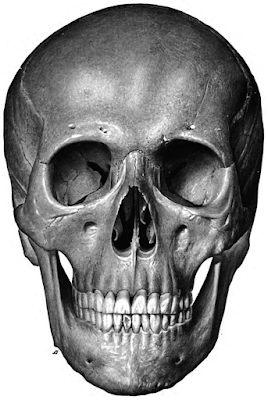 [Image is in the Public Domain]
Well, things went from bad to worse.  The skulls wouldn't stay buried, but reappeared in the great hall with terrible regularity.  All the servants quit.  Mrs. Phillipson and their only son took sick and died.  Miles Phillipson's reputation sank so fast there weren't even any bubbles, and he was forced to sell off his land a piece at a time until he had nothing left, and finally died in abject poverty.  Of later generations the legend doesn't speak, but Calgarth is said to still be standing, and although an exorcism was pronounced there in the nineteenth century, it is still subject to "strange sights and sounds."

What I find fascinating about all of this is not that an ancient manor house in England is the focal point of a wild tale of terror; heaven knows that it is hardly unique in that regard.  It is the intersection between legend and fact that interests me.  When I first read the tale of the screaming skulls of Calgarth, when I was perhaps fifteen years old, I figured that (like most of those sorts of legends) the men and women who peopled it were fictional, even if the places weren't.  I never dreamed that Miles Phillipson had actually lived and died in Calgarth, as per the legend, had had a surviving daughter (Anne Phillipson) whose son, Matthew Howard, emigrated to the United States in the mid-1600s and was the founder of a large and prosperous family in Anne Arundel County, Maryland.  (Why the curse didn't affect him, I'm not sure -- maybe it only applied to people who had the last name of Phillipson.)

What is interesting about this, too, is that for the most part, one side doesn't know what the other knows.  The genealogists have all of the dates and places; Miles Phillipson was born about 1540 in Westmoreland, married a woman named Barbara Sandys, had one surviving child (Anne) born in Calgarth in about 1575 or so.  None of the databases on the Howard family mention the rather sketchy story about what their ancestor supposedly did.  And I don't think it's because as genealogists, they'd be hesitant to include a wild tale; genealogists, I've found, absolutely love weird legends about their relatives, even if most of them are careful to include a disclaimer that "this is only a story."  But apparently almost none of the Howard family descendants are aware of the screaming skulls that supposedly haunted their distant ancestor.

Likewise, none of the recountings of the Calgarth story mention that the real Phillipson had one surviving child, and that Phillipson's grandson ended up being a wealthy planter in Maryland.  I guess I can understand why they'd be reluctant to include that; it makes Dorothy Cook's curse from the gallows have a little less punch, to know that the hex only lasted one generation.  But still -- you'd think that it would show up somewhere, but I couldn't find any reference to it at all.

The whole thing is kind of curious, especially given that the other two examples of ancestral hauntings I've come across seem to be well known both to the genealogical researchers and to the haunted house aficionados.  On my side of the family, we have Alexander Lindsay, the notorious "Earl Beardie," who supposedly lost his soul to the devil in a dice game and now haunts Glamis Castle in Scotland, swearing, drinking, and rolling dice (my dad's comment upon finding out that this was one of our ancestors was, "Yeah, sounds like my family, all right.").  On my wife's side, we have the Frys, who owned Morants Court in Kent, the site of the creepy story that became Alfred Noyes's poem "The Highwayman."

I suppose that every family has legends, but not many can beat the Shrieking Skulls of Calgarth for having all of the classic elements -- a false accusation, a grasping miser who gets his due, a curse delivered from the gallows, skulls, unearthly screams at night.  So next time you hear one of your kinfolk talking about "skeletons in the closet," keep in mind that whatever creepy goings-on have occurred in your family, it could be a lot worse.
They could be literal skeletons.  That refuse to stay buried.