The voices of the Aztecs

When a region is conquered, one of the first things the conquerors usually do is to suppress (or explicitly outlaw) indigenous languages.

One reason is purely practical -- to eliminate the possibility that the subjugated group can communicate with each other without being understood.  The other, however, is more insidious.  Language is a huge part of culture, and if you want to destroy the native society (or, more accurately, replace it with your own, something euphemistically called '"assimilation"), you must eliminate the most vital part of that culture -- how its members communicate with each other, how they express poetry and ethnic history and local knowledge.

Destroy the language, and you've struck at the heart of the culture itself.

An excellent (if tragic) case in point is Australia.  It is the home of over three hundred languages, 170 of which are indigenous.  (One of the reasons why indigenous Australians dislike the word "Aborigine" about as much as Native Americans do "Indian;" it implies the wildly-incorrect assessment that the entire indigenous population is a single culture.)  What is appalling, though, is that even if you exclude English -- the most widely-spoken language in Australia -- none of the top-ten-most-spoken languages in Australia are indigenous.  (In order, they are: Mandarin, Arabic, Cantonese, Vietnamese, Greek, Italian, Tagalog, Hindi, Spanish, and Korean.)  Only a quarter of a percent of Australian citizens speak an indigenous language at home.  Of the 170 indigenous languages that still survive (i.e. with at least some native speakers), all but fifteen are classified as severely endangered, with virtually no one learning them as children.  All of the speakers of those remaining 155 unique languages are elderly, and with the passing of that generation, they'll be gone forever except as a curiosity amongst linguists.

Not all indigenous languages are in quite that bad a shape.  One somewhat more hopeful case is Nahuatl, the language of the pre-Spanish-conquest Aztecs in central Mexico.  The clash of the Spanish and native cultures in the Americas is rightly depicted as the worst of the worst -- between the conquering armies and the self-righteous (and often just as violent) Christian missionaries, only a few decades after conquest there usually wasn't much left of the original language, art, music, and religion.  In the case of central Mexico, however, the conquerors took a more nuanced approach, introducing the Latin alphabet but allowing native speakers to continue using their own language.  In fact, during the sixteenth and seventeenth centuries, the missionaries did a decent job writing Nahuatl grammars and dictionaries, and during that time there were hundreds of works written in the language, including administrative documents as well as poetry, stories, histories, and religious codices.  Most striking of all -- and, as far as I know, unique in the history of contact between conquerors and the conquered -- in 1536, only twenty years after the arrival of the Spanish, the Colegio de Santa Cruz de Tlatelolco was founded, where bilingual classes were offered to teach Nahuatl to the missionaries and Spanish to the natives.  It wasn't until 1696 that King Charles II of Spain outlawed Nahuatl, but by that time enough of the Mexican Spanish upper-crust spoke Nahuatl themselves that it was pretty much too late to do anything about it.

As a result, there are still 1.5 million speakers of Nahuatl in Mexico.  Not bad, considering the moribund nature of most of the indigenous languages in the world.

The reason this comes up is because of a discovery that was the subject of a paper in Seismological Research Letters a couple of weeks ago that was about the intersection between historical linguistics and another fascination of mine -- geology.  A recently-deciphered fifty-page codex in Nahuatl turns out to describe a series of massive earthquakes that hit central Mexico between 1460 and 1542, including one that triggered a flood resulting in the drowning of eighteen hundred warriors.

The codex itself was created by Aztec tlacuilos ("those who write with painting") and is made up of pictograms that predate the adoption of the Latin alphabet by speakers of Nahuatl.  One of the most striking is a combination of four projections like the vanes of a windmill around a central circle, followed by a rectangle filled with dots.  The windmill-like symbol is the pictogram for the word ollin, meaning "movement;" the rectangle is tlalli, meaning "earth."  Taken together, it means "earthquake."  Further, if the central circle is open, it indicates that the quake happened during the daytime, and if it's closed, it happened at night. 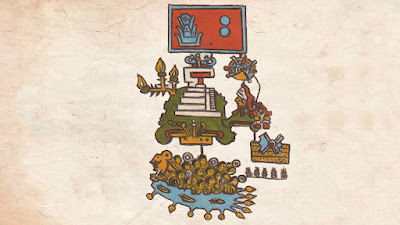 You can see the composite pictogram for "earthquake" in the lower right; all the way at the bottom is a depiction of the unfortunate warriors who drowned in the resulting flood.

As far as the timekeeping, the Aztecs -- like many Central American cultures -- were obsessive about the calendar, and had a 52-year calendrical cycle represented by the arrangement of four symbols -- tecpatl (knife), calli (house), tochtli (rabbit) and acatl (reed) -- arranged in thirteen different permutations.  Decoding that system allowed researchers to figure out that the earthquake that killed the warriors took place in 1507.

It's simultaneously fascinating and sad how few of the world's cultures have left significant traces for us to study, and of course that's largely humanity's own fault.  For example, the campaign of suppression by the Romans two-and-a-half millennia ago eliminated virtually every last trace of Etruscan -- there are over thirteen thousand inscriptions in Etruscan known to archaeologists, and they've been able to decipher only a fraction of them.  I can only hope that the endangered languages of our own time are treated more kindly.  What a pity it would be if in three thousand years, of the estimated 6,500 languages currently spoken, the only ones our descendants will be able to read are Mandarin, English, Hindi, Spanish, French, and Arabic.