A smile without a cat

Every time I hear some new discovery in quantum physics, I think, "Okay, it can't get any weirder than this."

Each time, I turn out to be wrong.

A few of the concepts I thought had blown my mind as much as possible:

Bizarre, counterintuitive stuff, right there.  But wait till you hear the latest:  three physicists, Yakim Aharonov of Tel Aviv University, Sandu Popescu of the University of Bristol, and Eliahu Cohen of Bar Ilan University, have demonstrated something they're calling a quantum Cheshire Cat.  Apparently under the right conditions, a particle's properties can somehow come unhooked from the particle itself and move independently of it -- a bit like Lewis Carroll's cat disappearing but leaving behind its disembodied grin. 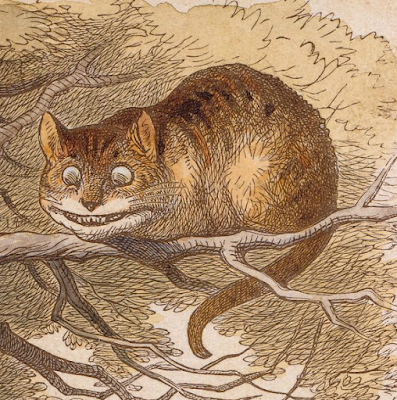 The Cheshire Cat from John Tenniel's illustrations for Alice in Wonderland (1865) [Image is in the Public Domain]
I'll try to explain how it works, but be aware that I'm dancing right along the edge of what I'm able to understand, so if you ask for clarification I'll probably say, "Damned if I know."  But here goes.
Imagine a box containing a particle with a spin of 1/2.  (Put more simply, this means that if you measure the particle's spin along any of the three axes (x, y, and z), you'll find it in an either-or situation -- right or left, up or down, forward or backward.)  The box has a partition down the middle that is fashioned to have a small, but non-zero, probability of the particle passing through.  At the other end of the box is a second partition -- if the particle is spin-up, it passes through; if not, it doesn't and is reflected back into the box.
With me so far?  'Cuz this is where it gets weird.
In quantum terms, the fact that there's a small but non-zero chance of the particle leaking through means that part of it does leak through; this is a feature of quantum superposition, which boils down to particles being in two places at once (or, more accurately, their positions being fields of probabilities rather than one specific location).  If the part that leaks through is spin-up, it passes through the right-hand partition and out of the box; otherwise it reflects back and interacts with the original particle, causing its spin to flip.
The researchers found that this flip occurs even if measurements show that the particle never left the left-hand side of the box.
So it's like the spin of the particle becomes unhooked from the particle itself, and is free to wander about -- then can come back and alter the original particle.  See why they call it a quantum Cheshire Cat?  Like Carroll's cat's smile, the properties of the particle can somehow come loose.
Whatever a "loose property" actually means.
The researchers have suggested that this bizarre phenomenon might allow counterfactual communication -- communication between two observers without any particle or energy being transferred between them.  In the setup I described, the observer left of the box would know if the observer on the right had turned the spin-dependent barrier on or off by watching to see if the particle in the left half of the box had altered its spin.  More spooky action-at-a-distance, that.
What I have to keep reminding myself is that none of this is some kind of abstract idea or speculation of what could be; these findings have been experimentally verified over and over.  Partly because it's so odd and counterintuitive, the theories of quantum physics have been put through rigorous tests, and each time they've passed with flying colors.  As crazy as it sounds, this is what reality is, despite how hard it is to wrap our minds around it.
"What is the most important for us is not a potential application – though that is definitely something to look for – but what it teaches us about nature," said study co-author Sandu Popescu.  "Quantum mechanics is very strange, and almost a hundred years after its discovery it continues to puzzle us.  We believe that unveiling even more puzzling phenomena and looking deeper into them is the way to finally understand it."

Indeed.  I keep coming back to the fact that everything you look at -- all the ordinary stuff we interact with on a daily basis -- is made of particles and energy that defy our common sense at every turn.  As the eminent biologist J. B. S. Haldane famously put it, "The universe is not only queerer than we imagine -- it is queerer than we can imagine."