I've long been curious how far back beliefs in the supernatural go.

From what we know about ancient religions and mythologies, belief in something that transcends ordinary human experience seems nearly ubiquitous.  I suppose that without adequate scientific model to explain natural phenomena, nor even the tools to study them, deciding that it must be supernatural forces at work is natural enough.  What puzzles me, though, is how detailed some of those beliefs are.  The ancient Norse didn't just say that there was some powerful guy up there causing thunder somehow; they said it was Thor throwing a giant hammer called "Mjölnir" that was forged by the dwarves Brokk and Sindri, but while they were forging it a fly bit Sindri on the forehead and made him stop pumping the bellows (the fly was Loki in disguise, trying to fuck things up as usual), so the hammer came out with a handle that was too short.

So I guess our belief in the supernatural is not the only thing that goes back a long way.  So does our penchant for telling elaborate stories.

A recent analysis of a 3,500 year old Babylonian artifact that had been gathering dust in the British Museum has shown that our belief not only in gods but in ghosts has a long history.  The tablet came to the attention of Irving Finkel, one of the world's authorities on cuneiform and ancient languages of the Mesopotamian region.  And when Finkel took a look at the tablet, he realized the previous translation had been incomplete and at least partly incorrect.  The text is about how to get rid of a ghost -- and the front of it has the faint outlines of a male ghost being led at the end of a rope by a woman. 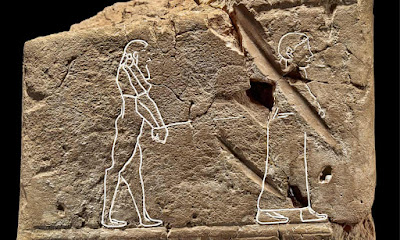 "It’s obviously a male ghost and he’s miserable," Finkel explained.  "You can imagine a tall, thin, bearded ghost hanging about the house did get on people’s nerves.  The final analysis was that what this ghost needed was a lover...  You can’t help but imagine what happened before.  'Oh God, Uncle Henry’s back.'  Maybe Uncle Henry’s lost three wives.  Something that everybody knew was the way to get rid of the old bugger was to marry him off...  It’s a kind of explicit message.  There’s very high-quality writing there and immaculate draughtsmanship.  That somebody thinks they can get rid of a ghost by giving them a bedfellow is quite comic."

The exact details of the ritual are as complex as the story of the forging of Thor's hammer.  You're to make figurines of a man and a woman, then, "... dress the man in an everyday shift and equip him with travel provisions.  You wrap the woman in four red garments and clothe her in a purple cloth.  You give her a golden brooch.  You equip her fully with bed, chair, mat and towel; you give her a comb and a flask.  At sunrise towards the sun you make the ritual arrangements and set up two carnelian vessels of beer.  You set in place a special vessel and set up a juniper censer with juniper.  You draw the curtain like that of the diviner.  You [put] the figurines together with their equipment and place them in position… and say as follows, Shamash [god of the sun and judge of the underworld by night]."
It ends by cautioning, "Don't look behind you."
Once again, you have to wonder how they figured all this out.  Were there other ghosts they tried to get rid of, but they only clothed the female figurine in three red garments, and it didn't work?  Did they serve the beer in alabaster vessels instead of carnelian, and the ghost said, "Well, fuck that, I'm not leaving."  What happens if you use cedar wood instead of juniper?  Most importantly, what happens if you look behind you?
Whatever the source of those details, it certainly demonstrates the antiquity of myth-making.  "All the fears and weaknesses and characteristics that make the human race so fascinating, assuredly were there in spades 3,500 years ago," Finkel said.
Here in our modern world, we tend to blithely dismiss such beliefs as "primitive" or "unsophisticated," but it bears keeping in mind that they were trying to explain what they experienced, just like we do.  Our scientific advancements have allowed us to peer deeper, and (more importantly) to make tests of our explanations to see if they fit the data -- but what the beliefs of the ancients lacked in rigor they made up for in a strange and intricate beauty.  And this little tablet gives us a window into a long-gone civilization -- making me wonder what other artifacts are still out there to be discovered, and what else we might be able to learn about the myths and folklore of our distant ancestors.