Our ability to perceive color is, when you think about it, a peculiar thing.

First, there's the rather hackneyed question of whether we all see color the same way (exclusive, of course, of people who are colorblind).  The way the question is usually phrased goes something like, "How could we tell if when you look at something red, what you see what I call green, but you still call it red because that's what you've learned?"  In other words, if I were to take a look through your eyes and brain, would the colors of objects be the same as what I see?

The answer is: we can't know for sure.  Thus far there's no way for one person to perceive the world through another person's sensory organs and brain.  But the great likelihood is that we all see colors pretty similarly.  All of our visual receptors are put together the same way, as are the visual cortices in our brains.  To assume that even with this structural and functional similarity, each person is still perceiving colors differently, runs counter to Ockham's Razor -- so without any evidence, it seems like a pretty untenable position.

More interesting is the comparison between how we see the world and how other animals do.  Once again, we run up against the issue that we can't see through another's eyes, but at least here we're on more solid ground because we can see that different animals have differently structured eyes.  Dogs, for example, have retinas with a much higher density of rods (the structures that operate in dim light, but only see in shades of gray) and a much lower density of cones (the structures that operate in bright light, and are able to differentiate by wavelength -- i.e., see colors).  Dogs aren't completely colorblind -- their two types of cones peak in sensitivity in the blue and yellow regions of the spectrum -- but they're relatively insensitive to colors outside that.  (This explains why my dog, Guinness, routinely loses his bright orange tennis ball in the bright green lawn -- to me, it stands out from fifty meters away, but he'll walk right past it without seeing it.)

Then, there are bees and butterflies, which have eyes sensitive not only in the ordinary visible light spectrum but in the infrared and ultraviolet regions, respectively.  There are flowers that look white to our eyes, but to a butterfly they're covered with streaks and spots -- ultraviolet-reflecting markings that advertising nectar to those who can see it. 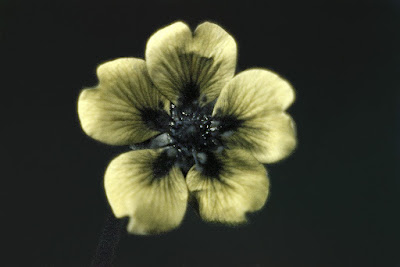 A flower of the plant Potentilla reptans, photographed in ultraviolet light.  To the human eye, the flower looks solid yellow -- this is what it might look like to a butterfly.  [Image licensed under the Creative Commons Wiedehopf20, Flower in UV light Potentilla reptans, CC BY-SA 4.0]

But the winner of the wildly complex vision contest is the mantis shrimp, which has sixteen different color receptors (contrasted with our paltry three), rendering them sensitive to gradations of color we aren't, as well as detecting ultraviolet and infrared light, and discerning the polarization angle of polarized light.  How the world looks to them is a matter of conjecture -- but it certainly must be a far brighter and more varied place than what we see.

The reason all this colorful stuff comes up is because of a paper that appeared last week in Proceedings of the National Academy of Sciences, called "What We Talk About When We Talk About Colors," by Colin Twomey, Gareth Roberts, David Brainard, and Joshua Plotkin of the University of Pennsylvania.  The researchers looked at how words describing different colors vary from language to language.  "The color-word problem is a classical one," Plotkin said, in an interview with Science Daily.  "How do you map the infinitude of colors to a discrete number of words?"

And, more central to this research: does everyone do it the same way?  If you showed me a series of gradations from pure blue to pure green, at what point to I switch from saying "this is blue" to saying "this is green" -- or do I call the intermediate shades by a third, discrete name?

What the researchers found was that across 130 different languages, humans tend to group and name colors the same way.  Further, if you give people tiles with varying shades of red and asked them to pick out "the reddest red," the results show remarkable consistency.

Another interesting result of the research was that the sensitivity of our eyes to color variation isn't the same from color to color; we are much better at picking out subtle variations in red, orange, and yellow than we are at seeing differences in (for example) different shades of brown.  The researchers believe this is due to a difference in what they call communicative need; since reds, oranges, and yellows are the colors of ripe fruit, we've evolved eyes that are most sensitive to variations in those colors.  "Fruits are a way for a plant to spread its seeds, hitching a ride with the animals that eat them," Twomey said.  "Fruit-producing plants likely evolved to stand out to these animals.  The relationship with the colors of ripe fruit tells us that communicative needs are likely related to the colors that stand out to us the most...  No one really cares about brownish greens, and pastels aren't super well represented in communicative needs."

So it seems like the great likelihood is that we all see the world pretty much the same way.  Well, all humans, at least.  What the world looks like to a dog, with their better dim-light vision and better motion detection, but far poorer color discrimination, can only be guessed at; and what colors a mantis shrimp sees is beyond the ability of most of us to imagine.

Study lead author Colin Twomey wonders whether the same techniques could be used to study other facets of sensory perception.  "This is something that could be carried to other systems where there is a need to divide up some cognitive space," he said, "whether it's sound, weight, temperature, or something else."

One I wonder about is the sense of taste.  We know that taste differs a great deal between different individuals, not only because everyone likes (and dislikes) particular flavors, and those preferences differ greatly; but there are some people called "supertasters" who are sensitive to minor variations in flavor that the rest of us don't even notice.  (I am most definitely not a supertaster; the joke in my family is that I have two taste buds, "thumbs up" and "thumbs down.")  The daughter of a friend of mine, for example, has amazingly sensitive taste buds, to the point that she can discern whether the coffee was brewed with filtered water or ordinary tap water.

Me, as long as it's brewed with water and not turpentine, I'm fine with it.

But that's all potential future research.  For now, we have a better idea of how each of us colors our world.  And despite our individual differences, the answer appears to be that what you're seeing and what I'm seeing look very much alike.