It means "a strong, one-sided social bond with a fictional character or celebrity."  I've never much gotten the "celebrity" side of this; I don't, for example, give a flying rat's ass who is and is not keeping up with the Kardashians.  But fictional characters?

Oh, yeah.  No question.  I have wondered if my own career as a novelist was spurred by the parasocial relationships (now that I know the term, dammit, I'm gonna use it) I formed with fictional characters very early on.  In my first two decades, I was deeply invested in what happened to:

Books hooked me as well, sometimes even more powerfully than television and movies.  A Wrinkle in Time, The Chronicles of Narnia, Lord of the Rings, The Lathe of Heaven, Something Wicked This Way Comes, The Chronicles of Prydain... I could go on and on.  Most of which caused the shedding of considerable numbers of tears over the fate of some character or another.

More recently, my obsession is Doctor Who, which will come as no shock to regular readers of Skeptophilia because I seem to find a way to work some Who reference into every other post.  Not only do I spend an inordinate time discussing Doctor Who trivia with other fans, I have found a way to combine this with another hobby: 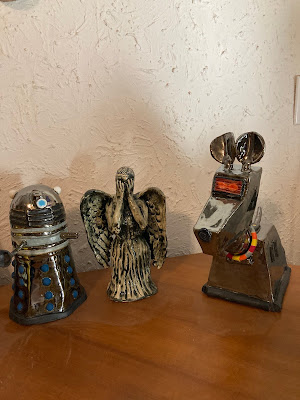 I made a ceramic Dalek, Weeping Angel, and K-9, which sit on my desk watching me as I work.  I'm careful not to blink.

The reason this comes up is a paper in The Journal of Social and Personal Relationships that looked at these parasocial relationships -- specifically, whether the COVID-19 pandemic had weakened our relationships with actual people, perhaps with a commensurate strengthening of our one-sided relationships with fictional characters.

The heartening results are that the pandemic hasn't weakened our bonds to our friends, but there has been a strengthening of bonds to the fictional characters we love.  So, real friends of mine, you don't need to worry that my incessant fanboying over the Doctor is going to impact our relationship negatively, unless you get so completely fed up with my obsession you decide to hang around with someone who wants to discuss something more grounded in reality, like fantasy football teams.

"The development, maintenance, and dissolution of socio-emotional bonds that media audiences form with televised celebrities and fictional characters has long been a scholarly interest of mine," said study author Bradley J. Bond, of the University of San Diego, in an interview with PsyPost.  "The social function of our parasocial relationships with media figures has been debated in the literature: do our parasocial relationships supplement our real-life friendships?  Can they compensate for deficiencies in our social relationships?...  Social distancing protocols and quarantine behaviors that spawned from the global COVID-19 pandemic provided an incredibly novel opportunity to study how our parasocial relationships with media figures function as social alternatives when the natural environment required individuals to physically distance themselves from their real-life friends...  [The research suggests that] our friendships are durable, and we will utilize media technologies to maintain our friendships when our opportunities for in-person social engagement are significantly limited.  However, our favorite celebrities and fictional characters may become even more important components of our social worlds when we experience severe alterations to our friendships."
Which I find cheering.  The pandemic has forced us all into coping mode, and it's nice to know that the tendency of many of us to retreat into books, television, and movies isn't jeopardizing our relationships with real people.
So I guess I'm free to throw myself emotionally into fictional relationships.  However much they cost me in anguish.  For example, I will never forgive Russell T. Davies for what he did to the beloved companion Donna Noble in the last minutes of the episode "Journey's End:" 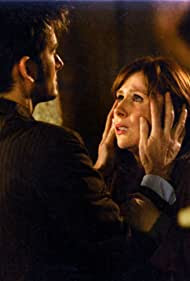 That was just not fair.  I can't even look at a still shot of this scene without choking up.
Be that as it may, it's nice to know I'm not alone in my fanboy tendencies, and that by and large, such obsessions are harmless.  Now, y'all'll have to excuse me, because I need to go work on my ceramic replica of the TARDIS.  Maybe I can install a little speaker inside it so when I press the button, it'll make the whoosh-whoosh-whoosh noise.  How cool would that be?
**************************************