Despite my frequent railing against superstition and magical thinking, it's not that I don't see its attractions.  As a teenager and twenty-something I was fascinated with such things as Tarot cards (I actually own no fewer than seven decks, and I haven't been willing to part them with because of how beautiful the designs are), numerology, astrology, and a host of other kinds of woo.  That I eventually threw it all aside (well, figuratively, in the case of the Tarot cards) I attribute to my commitment to a rationalistic view of the world.  I decided in my mid-twenties that I had to establish some criterion for finding what I considered to be the truth, and that logic and evidence seemed a lot more solid than "I fervently wish this was so." 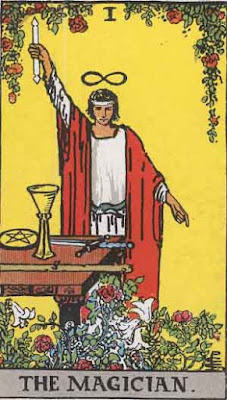 Since my conversion to skepticism, I've found myself looking at True Believers and wondering how they never made the same transition.  We apply the rules of the scientific method in scores of other ways -- "show me how you know this" isn't some kind of odd, esoteric rule only known to Ph.D. candidates (not that I've ever been one of those, but you get my drift).  So how can a person look at the extremely slim evidence for (say) astrology, and not say, "Okay, this makes no sense whatsoever?"

A study in the journal Applied Cognitive Psychology has given us at least a hint of why some people never leave behind their unsupported beliefs in the paranormal.  Its title -- which breaks the general rule that articles whose titles are questions always should be answered "No" -- is, "Does Poor Understanding of Physical World Predict Religious and Paranormal Beliefs?"  The researchers who conducted the study, Marjaana Lindeman and Annika M. Svedholm-Häkkinen of the Institute of Behavioral Studies at the University of Helsinki, looked at a group of 258 people and examined how real-world knowledge of science correlated with belief in the supernatural.  Perhaps unsurprisingly, the researchers found a series of strong correlations:

The results showed that supernatural beliefs correlated with all variables that were included, namely, with low systemizing, poor intuitive physics skills, poor mechanical ability, poor mental rotation, low school grades in mathematics and physics, poor common knowledge about physical and biological phenomena, intuitive and analytical thinking styles, and in particular, with assigning mentality to non-mental phenomena.  Regression analyses indicated that the strongest predictors of the beliefs were overall physical capability (a factor representing most physical skills, interests, and knowledge) and intuitive thinking style.

Note, of course, that correlation does not imply causation; it is by no means certain that the lack of scientific knowledge caused the belief in the supernatural.  In fact, if that were true, one of the other findings of the study would be less likely:

Nonscientific ways of thinking are resistant to formal instruction… which can affect individuals’ ability to act as informed citizens to make reasoned judgments in a world that is increasingly governed by technology and scientific knowledge.

If superstitious beliefs stemmed from something as simple as a lack of knowledge of the world around us, you'd think that you could eradicate magical thinking simply by enrolling people in a college-level physics course.  The fact that this isn't so makes me wonder if there is something else underlying a tendency toward belief in the supernatural -- perhaps something in the brain wiring -- that both makes a person likely to have less aptitude at science and technical subjects, and also results in a stronger likelihood of belief in the supernatural.  A previous study by Lindeman et al. suggests that this may be so:

We examined with functional magnetic resonance imaging the brain activity of 12 supernatural believers and 11 skeptics who first imagined themselves in critical life situations (e.g. problems in intimate relationships) and then watched emotionally charged pictures of lifeless objects and scenery (e.g. two red cherries bound together).  Supernatural believers reported seeing signs of how the situations were going to turn out in the pictures more often than skeptics did.  Viewing the pictures activated the same brain regions among all participants (e.g. the left inferior frontal gyrus, IFG).  However, the right IFG, previously associated with cognitive inhibition, was activated more strongly in skeptics than in supernatural believers, and its activation was negatively correlated to sign seeing in both participant groups.

So once again, we have some evidence that what we think and believe might not entirely be a choice -- it might be hardwired into our brains.  If so, despite my toying with paranormal woo as a young person, I might have been destined all along to become the hard-headed skeptic you all know and (I hope) love.