It's the most wonderful war of the year

Welp, I guess it's time to dust off my camo and flak jacket and helmet and guns.

The War on Christmas is starting early this year.

I wish I was kidding about this, but I'm not.  It's not even Halloween and already the right-wing religious nutcakes are bringing back the claims that we non-religious types, and the Democrats in general, are planning to carpet-bomb Whoville or something.  This time it's started with the House Republican Caucus, which tweeted a photo of President Biden a couple of days ago along with the message, "This is the guys [sic] who is trying to steal Christmas.  Americans are NOT going to let that happen."

This year the gist of it seems to revolve around the (genuine) supply-chain problems that have been plaguing the United States for months, and which will probably result in raised prices and some items being delayed in shipping, if not outright unavailable.  I can understand the frustration with this.  On the other hand, complex problems rarely have one cause, and saying "This is Joe Biden's fault!" is just plain idiotic.  How much of it has to do with the current administration's policies, how much of it with leftovers from the previous administration's policies, and how much of it is pure circumstance (e.g. the pandemic) is not a simple question.

Much easier just do say "Biden did it!" and whip up some nice, Christmas-y outrage, despite the fact that Biden himself is a staunch Catholic and would hardly be likely to have secret aspirations to take over the Grinch's job now that the latter's heart grew three sizes.

Of course, "in touch with reality" is not a phrase that is generally associated with these people.  The whole War-on-Christmas trope goes back to 2005, when right-wing radio host John Gibson published a book called, The War on Christmas: How the Liberal Plot to Ban the Sacred Christian Holiday Is Worse Than You Thought.  This was sixteen years ago, and every single year since then Fox News has spent inordinate amounts of time screeching about how we secular-minded types are secretly trying to ban Christian holidays, prevent anyone from saying "merry Christmas," and jail people who attend holiday services.

Now, I don't know if you've noticed, but if you'll think back carefully, you may recall that in every single one of those sixteen years, Christmas has happened, right on schedule.  People still say "merry Christmas" all they want with no repercussions, and no one has been arrested coming out of church on Christmas morning.

For a "liberal plot that's worse than you thought," odd that it's had zero discernible effect.

This would be honestly be hilarious if these people didn't have so much power over the American psyche.  The mystifying part, though, is that all you have to do is look around to realize that they're either delusional or lying outright.  Merely driving through any random town in America in December should be sufficient to convince you that Christmas is alive and well.  Around here, we have lots of folks who put up holiday displays in their yards with giant inflatable Santas, reindeer with glowing noses, various takes on nativity scenes, and enough lights to disrupt air traffic.  All the local stores start putting out Christmas-related stuff in November or earlier, so the capitalist side of the celebration is still as lucrative as ever. 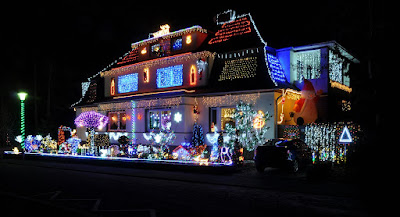 What is ironic about all this is that I, and a great many non-religious folks I know, all celebrate Christmas.  If I really harbored deep-seated anti-Christian rancor you'd think that avoiding Christmas entirely would be an easy choice for me; not only am I not religious, my wife is Jewish.  Built-in excuse, right there.  Despite that, we put up a Christmas tree most years, always exchange gifts, and send out holiday cards when we can get our act together sufficiently to write them before Christmas Eve.  I do this mainly because (1) I think Christmas trees are pretty, and (2) I love giving people stuff.  I may not believe all the religious side of the holiday, but it's pretty obvious I'm not hostile to it.

The bottom line is -- and I've said this enough times that you'd think the point would be made -- 99% of secular folks, myself included, do not give a flying rat's ass what exactly you choose to believe, nor how you express those beliefs.  You can believe that your life's path is being directed by the divine influence of a magical bunny from the Andromeda Galaxy if you want to.  You can wear a bunny suit everywhere you go, wiggle your nose when you're annoyed, and eat nothing but carrots.  I honestly do not give a damn.

What I object to is when you start saying that the rest of us have to believe in the magical bunny, and want to open all public meetings with bunny-prayers, and demand that public school science classes include a unit on the Theory of Young-Earth Bunnyism.  Then you're gonna have a fight on your hands.

But this isn't being driven by logic and evidence, and never has been.  The people who make a huge deal out of the War on Christmas every year seem to fall into two categories: (1) partisan yahoos who want to stir up outrage against the other side and don't mind lying through their teeth to do it, and (2) truly religious types who also have a wide streak of paranoia and the gullibility to believe what they hear on Fox News.  The rest of us, religious and non-religious alike, usually all get along pretty well.

But I guess that's all beside the point.  Tiresome though it is, if you're an atheist, duty is duty.  Uncle Sam Wants YOU.  (Not that Uncle Sam, I'm talking about Sam Harris.)  I guess when you're called up, you don't really have a choice in the matter.  So, into the breach, may Dawkins protect us, and all that sort of thing.  I'm not optimistic about winning this year, given that we're 0-and-16, but you never know.  If we're lucky, maybe we'll get some supernatural assistance from the ghost of Christopher Hitchens.

Failing that, it'll be up to the magical bunny from Andromeda, and his track record ain't that great, either.