I had two experiences in the last couple of weeks, one funny and one maddening, both of which at their heart boil down to the same thing.  I work as an aide for a developmentally disabled man, and mostly what he likes doing is going for long walks.  And both of these incidents happened in almost the same place -- a nearby park which is my friend's favorite spot to go on nice days.

The first I kind of saw coming.  We were heading around a bend in the path, and standing there was a guy holding pamphlets of some sort.  As soon as we got in range, he started telling us that he was there to spread Jesus's word, and could he give us some pamphlets to read.  I said, "No, thanks," but the guy wasn't gonna be brushed off that easily.

"We all need to hear the message of the Lord," he said.

I just kind of stared at him.

"It's how we know right from wrong."  He gave me a disapproving scowl.  "For example, St. Paul said that it is a disgrace for a man to have long hair."

I laughed, a little incredulously, and said, "Tell St. Paul he needs to mind his own damn business," and kept walking.

The second, though, just pissed me off.  There's a nice spot in the park down by a marina, where my friend likes to spend some time watching the boats.  He was standing near the water, and I sat on a bench close by.  I pulled out my phone to check my messages -- at the time, a dear friend of mine was in the hospital, and I wanted to see if there were any updates on her condition.

I was looking at my phone -- no texts or updates, unfortunately -- when a woman who was on the path nearby said, "Isn't it too beautiful a day to spend your time with your nose in your phone?"

I looked up at her, trying to figure out how to respond.  I certainly wasn't going to explain my actions to her; I didn't feel like I was obliged to justify myself to a prying stranger.  I finally shrugged and said, "Yeah," and slipped my phone back into my pocket.  Apparently gratified that she had awakened me to the beauty of nature, she went off with a smile.

In both cases, the issue is about judgment, isn't it?  Neither the fact that I have a ponytail nor my checking my text messages in the park is anyone's business but my own; I'm a bit baffled that anyone would even have an opinion on either of those things.  My mom used to say, "My rights end where your nose begins," and I think that's spot-on, but I'd extend it.

My right to pass judgment ends where your nose begins.

It's easy to judge someone harshly when you don't know the full story.  And you seldom ever do.  What does it cost you to start from the assumption that most people, most of the time, are working from good intentions?  I don't mean you should become gullible, or ignore or excuse truly obnoxious behavior; but why do so many people feel like it's required that they have an opinion about everything and everyone, whether or not it concerns them in the slightest -- the vast majority of them negative?

How about we all do our best to focus not on judging people, but on simply being kind? 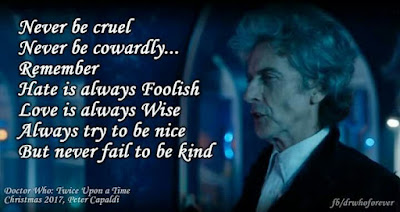 The Doctor, as always, has things figured out.
You could argue that both the religious guy and the nature woman were themselves acting out of good intentions; the religious guy trying to save me from hell, the nature woman trying to clue me in to what she thought I was missing.  But the fundamental issue here is that neither of them had the least idea who I was, nor bothered to find out.  Without any knowledge of me or my situation, they both were convinced they knew what I needed to be doing better than I did.
The whole incident with the phone reminded me of this photograph that was making the rounds a couple of years ago, did you see it? 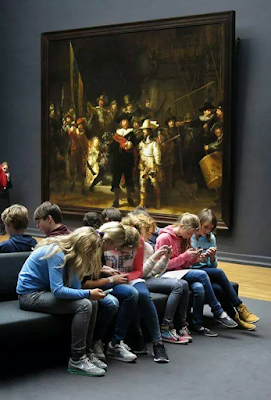 It was usually accompanied by a sneery message about teenagers and how they don't care about anything but social media and why would you even be in an art museum if all you want to do is stare at your phone.  Finally, someone who was there at the time tried to set the record straight; these young people were staring at their phones...
... because they were participating in an online self-guided tour about the lives and work of the artists in the museum.

But as far as I'm aware, that didn't cause any sheepish retractions, and I still sometimes see this photo making the rounds to highlight what slackers teenagers are and/or how technology will destroy us all.

Somehow, indignation seems to come far more easily to people than charity does.

I'll end with another of my experiences -- this one when I was about six.  Something had happened at school -- I don't even recall what -- and I was bristling with annoyance toward some classmate of mine whom I perceived as having wronged me.  As I was walking home I passed the house of our wonderful friend Garnett, who was out working in her garden, and proceeded to her tell my tale of woe, assuming she'd commiserate with me a little.

What she said knocked me back, and I've never forgotten her gentle words to me that day.  "Gordon, I know you're mad at your friend, but whenever you're tempted to be angry, I want you to remember something," she said.  "Always be kinder than you think you need to be, because everyone you meet is fighting a terrible battle that you know nothing about."