I live in a place that doesn't change very much, and I mean that not only in the human sense -- rural upstate New York is not exactly a center of urban development -- but even on the geological time scale.  The bedrock here is Devonian shale, slate, and limestone, on the order of three hundred million years old.  At the point this rock was forming, where I'm sitting right now would have been at the bottom of a shallow subtropical ocean.  Since then, things have dried out a tad, and it's no longer anywhere near subtropical.  There have been a few glaciers in the last few million years; the most recent one started to melt back about 75,000 years ago.  This left behind the Elmira Moraine, only thirty miles south of where I live -- a rubble pile that marks the southern edge of where the glacier pushed rocks and debris ahead of it like a plow.  (The gazillions of rocks of various descriptions that I curse every time I try to dig in my yard are gifts from that last glacier -- glacial erratics -- some of them carried hundreds of miles away from where they formed.)

Other than that, I live in a pretty calm part of the world.  It'd be easy to look around and think the world is static, that the way things are now is the way they'll always be.

Not so in some places.  There are areas of the world where people are well aware that the topography can change in an instant from earthquakes or volcanoes.  Unfortunately, geologically-active areas tend to be heavily populated -- the temblor-prone regions because the scenery is often beautiful (think coastal California) and the volcanic regions because the soil is so fertile (like the land near Naples, Italy, in the shadow of the infamous Mount Vesuvius).  But the fraction of the world's population that lives in an area where the land is changing shape quickly is honestly very small, so most of us figure the mountains and lakes and rivers and whatnot aren't going anywhere.

If you were under any illusions about the fact that the Earth is an active place, consider the paper that came out in Nature last week describing the largest underwater volcanic eruption ever recorded -- one that literally caused a mountain to appear where none had been five years earlier.  Check out the before-and-after photos of the ocean floor, from 2014 and 2019:

Even a non-geologist like myself hardly needs the giant red arrow to see the new mountain where there wasn't one before.

The volcano, fifty kilometers off the coast of the island of Mayotte in the Comoros Archipelago (which lie between the northern tip of Madagascar and the coast of northern Mozambique), is thought to be part of the extremely active East African Rift Zone, an incipient divergent fault system that will ultimately tear off the "Horn of Africa" and create a new microcontinent containing all of Somalia and pieces of Ethiopia, Kenya, and Tanzania.  The eruption seems to have begun in May of 2018, when an earthquake of magnitude 5.8 hit Mayotte.  A team of geologists from France was dispatched to see what was going on, and they installed a monitoring system in February of 2019.  They recorded more than 17,000 seismic events in the next three months, as the mountain grew. 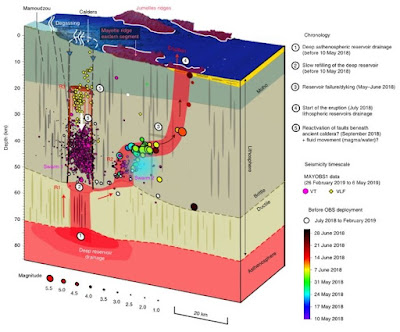 A map showing the chronology of the eruption

Ultimately, the series of eruptions added five cubic kilometers of hardened magma to the seafloor -- a new undersea mountain.

"The volumes and flux of emitted lava during the Mayotte magmatic event are comparable to those observed during eruptions at Earth's largest hotspots," the researchers wrote.  "Future scenarios could include a new caldera collapse, submarine eruptions on the upper slope or onshore eruptions.  Large lava flows and cones on the upper slope and onshore Mayotte indicate that this has occurred in the past."

So if you have a beach home in Mayotte, you might want to consider moving.

All of which makes me once again thankful to live in a place as geologically quiet as we do.  The St. Lawrence Valley, about two hundred kilometers north of us, has earthquakes sometimes, and I recently found out that New York City has fault lines that could potentially generate earthquakes, and in fact have done (none, thus far, severe, at least not in recorded history).

But here, all is tranquil.  Which is fine by me.  Given that an exciting day in upstate New York is when the farmer across the road bales his hay, I always hope for something unexpected, but if it comes to major earthquakes and volcanic eruptions, I'd just as soon not be anywhere near.