A friend of mine and I were discussing poetry a few days ago, and the inevitable question came up: what is your favorite poem?  After our chat, I started thinking that this would be a good topic for Fiction Friday.

I'm not a poet myself, so I can't claim any particular expertise.  Poetry is a compact, crystallized way to tell a story or evoke an emotion, and I tend to be... a little long-winded.  Thus the fact that I'm a novelist.  I am always in awe of someone who can pull off a truly beautiful or evocative poem, because creating resonance in the reader in such a short form seems like such a challenge.  My own favorite poetry usually has some twist on the use of words, something that spins your brain around a little and makes you see the world in a different way.  That's why I've always loved e. e. cummings.  He has a way of turning simple language on its head to create uniquely surreal beauty.  Two of my favorites are the sweet, joyous "if everything happens that can't be done" and the short but chilling "me up at does."  Another contender is Elizabeth Bishop's beautiful "The Fish," and I would be remiss not to mention Stevie Smith's brilliant "Our Bog is Dood," which seems to make no sense at all until... suddenly... the message is crystal clear, and devastating.
But if I had to pick one only, it would be Walter de la Mare's "The Listeners," which (because it was written in 1912) I will reproduce here in full:

‘Is there anybody there?’ said the Traveller,
Knocking on the moonlit door;
And his horse in the silence champed the grasses
Of the forest’s ferny floor:
And a bird flew up out of the turret,
Above the Traveller’s head:
And he smote upon the door again a second time;
‘Is there anybody there?’ he said.
But no one descended to the Traveller;
No head from the leaf-fringed sill
Leaned over and looked into his grey eyes,
Where he stood perplexed and still.
But only a host of phantom listeners
That dwelt in the lone house then
Stood listening in the quiet of the moonlight
To that voice from the world of men:
Stood thronging the faint moonbeams on the dark stair,
That goes down to the empty hall,
Hearkening in an air stirred and shaken
By the lonely Traveller’s call.
And he felt in his heart their strangeness,
Their stillness answering his cry,
While his horse moved, cropping the dark turf,
’Neath the starred and leafy sky;
For he suddenly smote on the door, even
Louder, and lifted his head:—
‘Tell them I came, and no one answered,
That I kept my word,’ he said.
Never the least stir made the listeners,
Though every word he spake
Fell echoing through the shadowiness of the still house
From the one man left awake:
Ay, they heard his foot upon the stirrup,
And the sound of iron on stone,
And how the silence surged softly backward,
When the plunging hoofs were gone.

What I love about this poem is that it gives you a piece of a story, and leaves you to imagine what the rest might be.  What had the Traveller given his word to do, and to whom, and why?  Who are the listeners, and why didn't they answer?  The whole thing gives me chills every time I read it, because -- as Stephen King pointed out in his masterful analysis of horror fiction Danse Macabre, sometimes it's better for writers of horror to leave the door closed.  Left to their own, readers can conjure up some really scary explanations for what might be behind it. 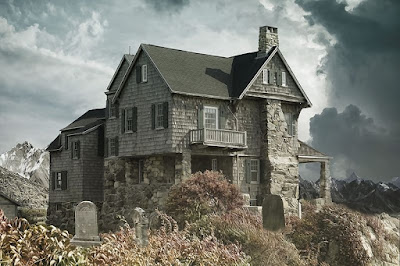 [Image is in the Public Domain]
So that's my favorite poem, and I hope you'll take the time to check out the links I provided to some other wonderful ones.  Now, let's hear from you: what are some of your favorites?