I've been a musician for over forty years, and I think I'm reasonably good at my instrument, but there's one thing I've never learned how to do: improvisation.

To be fair, the two styles of music I've played the most -- classical, and Celtic folk music -- are not known for incorporating improv.  I took a workshop some years ago about how to free up our playing, and the teacher did a couple of improv exercises with us.  I found them extremely challenging, and even that is probably an understatement.  "Damn near impossible" is closer to the mark.  I've always been wound a little too tightly, and letting go of my inhibitions, just making stuff up and not caring if I make mistakes, is not easy for me.  My reaction was mostly to freeze up, sit there with a panicked look on my face, and pray for my turn to be over.

Now, in my own defense, I think I'm pretty good at playing expressively.  Music for me is very emotional, and being able to express emotion through playing (or singing) is at the heart of performance.  So I think I can play a piece I know evocatively -- but as for doing true improvisational music, taking a basic chord structure and making up a tune on the spot to go with it, I don't know that I could ever learn how to do that fluidly. 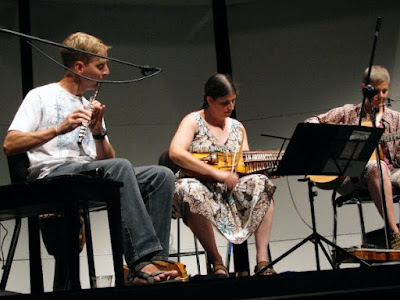 My band, Alizé, performing at the Eastman School of Music

So I'm always a little in awe of people who can.  I remember some years ago heading up to the Eastman School of Music in Rochester, New York, where my band and I were performing a set of French folk tunes for a bunch of students who were mostly studying classical and jazz.  The amusing thing is that we seemed to fall square in the middle of the two groups of students.  The classical students, used to playing exclusively from written music and reproducing it perfectly from the dynamics markings, were kind of boggled by the fact that I and my band members didn't have to plan ahead when to switch from one tune to the next in a medley, when one of us would take a solo, and when we were going to end.  It was all decided on the fly and communicated between us by eye contact and subtle body language.  The jazz players, on the other hand, probably felt what we were doing was rudimentary; in the jazz tradition, improv is pretty much what you're aiming for right from the beginning.  If that wasn't apparent enough, after our session we attended a performance by some of the senior jazz students, where they had a music stand with a set of cards, one of them for the time signature and the other for the key signature, and invited the audience members to come up at random intervals and change one or the other.  As the piece progressed, they had to modulate rhythm and key to match whatever the cards were at the time.  Going from one key to another can be straightforward -- C major to A minor, for example, isn't difficult -- but going from C major to F# minor is a huge jump.  But they did it smoothly, their transitions clean and seemingly effortless, putting to shame our simple tune changing when one of us wiggled his/her eyebrows.

What's clear, though, is any kind of musical flexibility -- being able to play something more than what's on the sheet music -- requires that you get out of your own way and relax.  How good improvisational musicians accomplish that was the subject of a study out of Georgia State University published last week in Scientific Reports that showed the relaxation of control you have to master to improv well is actually reflected by what is happening in the brain.

The researchers hooked twenty-one skilled jazz musicians up to a fMRI machine and had them do one of two things -- either to listen to a standard twelve-bar bebop chord progression and imagine what they might sing to go with it, or actually to improvise the singing on the spot.  What they found was that two places in the brain -- the default mode network and the executive control network -- both changed in activity level during the task.  The default mode network has its highest levels of activity during wakeful rest, what we'd usually call "daydreaming" or "mind wandering."  The executive control network is most active during complex problem solving and accessing working memory.  What the researchers found is that in both groups -- the ones who actually sang to the chord progression, and the ones who imagined it -- the activity in the executive control network decreased and the activity in the default mode network increased.  Further, the cross-talk between the two systems slowed down significantly.

So my sense of improv requiring "getting out of your own way" is pretty close to the mark.  We have to damp down the executive functions of the brain so that the creative parts can be accessed more fluidly.  "We saw that when expert musicians are improvising, the brain is interfering less with their creativity," said study co-author Martin Norgaard.

Myself, I wonder if the same phenomenon explains something I've experienced many times, which is when I've run into a plot problem while working on a novel.  Figuring out "why did that character do that?" or "what happens next?" can often seem intractable.  And I've found that hammering away at it -- presumably using my executive control network -- seldom works.  It's much more productive to put aside the laptop and do something entirely different, like going for a run.  Nine times out of ten, while I'm out there, running along and listening to music, the solution will pop into my head, seemingly out of nowhere.

It's fascinating to see researchers beginning to get a handle on that most mysterious of human abilities -- creativity.  Apparently, wherever creativity ultimately comes from, it requires relaxing the control you have over what your mind is doing.  It's still unknown why it expresses differently in different people -- music, art, dance, or storytelling -- but the idea that the release mechanism might function the same way in all of them is intriguing.

And now, I think I'd better get to work on my novel-in-progress.  I've got a couple of unresolved plot points to figure out that have been remarkably resistant to the beat-it-unto-death approach, so maybe "working on my novel" this morning will look to the outside world like "going for a long run."  Hey, whatever works to get my overactive executive control network to simmer down.