Remembrance of stress past

About eighteen years ago, my wife and I went on a vacation to Hawaii.  The trip was awesome, and we had a fantastic time in Kauai, appreciating the beauty of the Garden Island, where "chill out" is the order of the day and there are signs that say "No shoes, no shirt, no problem."

Then we started on the voyage home.

I won't belabor you with the entire story.  Suffice it to say that it involved:

Of course, I'm entirely to blame, because after each increasingly-ridiculous mishap, I said to my wife, "Well, what else could go wrong?"

Never ever say those words.  I'm not superstitious, but in this case I'm convinced that the universe waits for some hapless schlub to say that before dropping a piano on his head.

What is interesting about this whole thing -- besides the fact that in retrospect, it makes a hilarious story -- is that I remember the unpleasantness and stress of the trip back much better than I remember the relaxing and enjoyable vacation we were coming back from.  I'm hard-pressed to recall a single specific detail from being in Hawaii, other than a vague memory of sun, hiking, scuba diving, and drinks with little umbrellas -- but the memories of what it was like trying to return from Hawaii are so vivid it's like they happened yesterday.

Turns out, I'm not alone in finding that stressful experiences stick in our brains better than pleasant ones do.  A study released last week in Current Biology found that pretty much all of us remember trying situations much more vividly than we do positive ones. 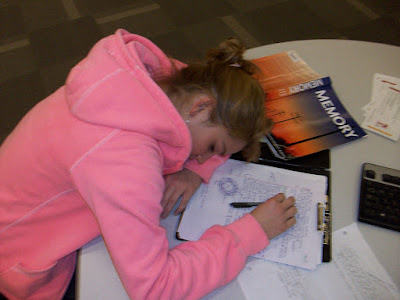 What's more, the researchers who did the study -- a team made up of Anne Bierbrauer, Marie-Christin Fellner, Rebekka Heinen, Oliver Wolf, and Nikolai Axmacher, of the Ruhr-Universität Bochum in Germany -- found the underlying mechanism for why awful memories seem to have such durability.  When a memory is connected with a stressful experience, the "memory trace" (neural firing pattern associated with recalling the memory) is linked through the amygdala -- a part of the brain associated with anxiety, fear, anger... as well as emotional learning and memory modulation.

Recent evidence has further shown that amygdala neurons do not only respond to fearful or stress-related stimuli, but exhibit mixed selectivity as well: their firing may represent various different emotional and social dimensions, depending on task and context.  In humans, amygdala neurons respond to faces and to perceived emotions, and fMRI studies showed that the amygdala represents both fear memories and the subjective valence of odors.  Such multidimensional representations may serve to bind the diverse aspects of an emotional experience into one integrated episode.

Which certainly is the case with my memory of the Hawaii debacle.  My pleasant memories from the holiday -- which took place over six days -- are fragmentary and vague as compared with the memory of the trip back, which took only two days but plays out in my mind as a single coherent story.

When you think about it, it makes evolutionary sense.  Thag and Ogg having a vivid, detailed memory of the nice mammoth dinner they had two weeks ago is far less critical to survival than the memory of where they almost got killed by a saber-toothed tiger.  (That's an oversimplification, of course; complex behaviors are almost never the result of a single evolutionary driver.  But the value of remembering dangerous situations more strongly than happy ones can't be denied.)

The downside, of course, is that really negative memories get seared into our consciousness more or less permanently.  This can result in memory patterns that actively interfere with our ability to live a normal life -- better known as post-traumatic stress disorder.  So getting to the bottom of how this happens in the brain is the first step toward addressing that debilitating condition.

As for me, my silly return-voyage story doesn't cause me any anguish, and in fact, I've told it many times to various friends over pints of beer, to the general amusement of all.  The experience did, however, stop me from ever saying "What more could go wrong?"  Because I've found that not only is there always something else that can go wrong, when it does, you'll remember it forever.