It's been one of the most enjoyable parts of traveling for me, and despite the fact that "it's a delicacy" may sound like it's synonymous with "this is a food we give to stupid tourists to see if they'll actually eat it," most of what I've tried has been delicious.  I even loved durian, the notoriously stinky fruit from southeast Asia that food writer Richard Sterling famously described as smelling like "pig shit, turpentine, and onions, garnished with a gym sock."  Despite its smell, I thought it tasted like a combination of raspberry yogurt and almond paste.

So I thought it was pretty cool that a food historian named Andrew Coletti has specialized in finding ancient documents recording recipes from centuries ago -- and recreating them in the kitchen.

Coletti has made dishes from medieval Europe, eleventh-century Persia, twelfth-century Morocco, thirteenth-century Egypt, fourteenth-century Spain, and fifteenth century Turkey.  But now he's turned his attention to further back in time -- to the Roman Empire.

Using a fourth-century cookbook called Apicius, Coletti has tried to recreate what the Romans of the time liked to eat.  Some of it is similar enough to what we typically serve; baked scrambled eggs with asparagus, a dessert like a sponge cake soaked in honey, a poppyseed cheesecake, and about a dozen recipes involving oysters, which the Romans adored.  There are fried ground meat patties that sound a great deal like hamburgers.

And of course, if you have hamburgers, what else is necessary?

Turns out the ancient Romans ate something very much like fries with ketchup.  They didn't have potatoes -- despite the association of potatoes with Ireland, the potato is a Western Hemisphere native and wasn't widely grown in Europe until the seventeenth century -- but they did have other starchy root vegetables, like parsnips.  And fried slivered parsnips were served with oenogarum, a ketchup-like condiment made from red wine, fish sauce, black pepper, lovage (an herb similar to celery), and honey. 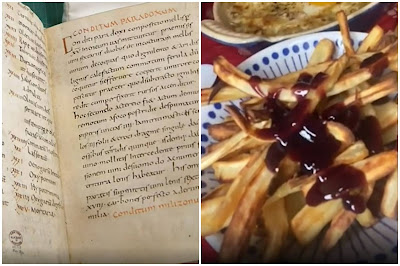 Parsnip fries with oenogarum (from Coletti's TikTok @PassTheFlamingo)
"This is probably my favorite ancient Roman recipe ever," Coletti said.  "It fits right into a banquet of other Apicius recipes.  But it would also fit in at a modern table."

If you were to time-travel back to ancient Rome, the oddest thing would probably be what they didn't have.  Besides potatoes, such familiar culinary items as corn, tomatoes, squash, and green and red peppers were all introductions from the Western Hemisphere much later on (black pepper was used -- it was an exotic and expensive import -- and comes from an entirely different species of plant).  The introductions went both ways, of course.  Interestingly, given the "American as apple pie" cliché, apples are not native to North America, but were introduced by the French into Canada in the seventeenth century, and spread from there.

Anyhow, I find Coletti's work intriguing, and if you're on TikTok you should definitely follow him (@PassTheFlamingo).  Given my fascination with the ancient world, I think I might try to create an authentic Roman dinner.  I'd definitely like trying to make some oenogarum -- although I don't know where the hell I'll find lovage.  Maybe if I boost the amount of red wine, no one will notice that I substituted celery.

**********************************
During the first three centuries C.E., something remarkable happened; Rome went from a superpower, controlling much of Europe, the Middle East, and North Africa, to being a pair of weak, unstable fragments -- the Western and Eastern Roman Empires --torn by strife and internal squabbles, beset by invasions, with leaders for whom assassination was the most likely way to die.  (The year 238 C.E. is called "the year of six emperors" -- four were killed by their own guards, one hanged himself to avoid the same fate, and one died in battle.)
How could something like this happen?  The standard answer has usually been "the barbarians," groups such as the Goths, Vandals, Franks, Alans, and Huns who whittled away at the territory until there wasn't much left.  They played a role, there is no doubt of that; the Goths under their powerful leader Alaric actually sacked the city of Rome itself in the year 410.  But like with most historical events, the true answer is more complex -- and far more interesting.  In How Rome Fell, historian Adrian Goldsworthy shows how a variety of factors, including a succession of weak leaders, the growing power of the Roman army, and repeated epidemics took a nation that was thriving under emperors like Vespasian and Hadrian, finally descending into the chaos of the Dark Ages.
If you're a student of early history, you should read Goldsworthy's book.  It's fascinating -- and sobering -- to see how hard it is to maintain order in a society, and how easy it is to lose it.
[Note: if you purchase this book using the image/link below, part of the proceeds goes to support Skeptophilia!]