The mystery from Manu

So much of the damage we've done to the planet hasn't been deliberate destructiveness; it's been due to our carelessly stomping about the place.  We've long had the attitude that resources will never run out, that we can get away with doing whatever we want with no consequences, that nature will rebound like it always does.  There's little awareness of the absolute fragility of it all.

The "bull in a china shop" metaphor seems all too apt.

Of course, that mindset does require a good dollop of willful ignorance.  Just two weeks ago, the United States Fish and Wildlife Service declared that 22 species in the US that were previously classified as critically endangered are now officially considered extinct.  The most famous of them is the Ivory-billed Woodpecker, the largest woodpecker species native to North America, victim to habitat loss as the wetland forests where it lived were drained, the trees felled for lumber.  A full nine of the 22 are bird species endemic to Hawaii, eight of them part of the unique group called Hawaiian honeycreepers that were decimated by the double whammy of habitat loss and susceptibility to avian malaria, carried by the introduced Asian tiger mosquito.

So to think "everything's just fine" you have to make a practice of not paying attention.

One of the problems is that in some of the most vulnerable places in the world, species are disappearing before they're even identified and studied.  Take, for example, the species of tree native to the Amazon basin of Peru that was first seen by scientists in 1973 -- and that has just now been classified and named.

Robin Foster of the Smithsonian Tropical Research Institute was the one who noticed it, while walking in Manu National Park -- and despite a thorough knowledge of Amazonian flora, he couldn't figure out what it was.  "When I first saw this little tree, while out on a forest trail leading from the field station, it was the fruit -- looking like an orange-colored Chinese lantern and juicy when ripe with several seeds -- that caught my attention," Foster said.  "I didn't really think it was special, except for the fact that it had characteristics of plants in several different plant families, and didn't fall neatly into any family.  Usually I can tell the family by a quick glance, but damned if I could place this one."
So Foster sent a branch of the plant to the Field Museum of Chicago, where it sat in the herbarium for almost fifty years.  When DNA analysis became de rigueur for doing taxonomy, back in the 1990s, researchers tried extracting DNA from the dried leaves -- unsuccessfully.  Then last year, scientist Patricia Álvarez-Loayza, who is part of the team that studies the ecosystem in Manu National Park, found a living specimen of the tree, and this time the DNA extraction worked. 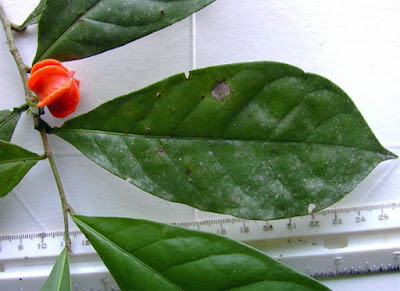 Aenigmanu alvareziae
The results were a shock to botanists, because it showed beyond any question that the little tree belonged to an obscure tropical family called Picramniaceae, made up of 48 (now 49) species native to northern South America, Central America, and the Caribbean, but not common anywhere.  "When my colleague Rick Ree sequenced it and told me what family it belonged to, I told him the sample must have been contaminated.  I was like, no way, I just couldn't believe it," said Nancy Hensold of the Field Museum, part of the team that studied the plant and finally identified its affinities.  "Looking closer at the structure of the tiny little flowers I realized, oh, it really has some similarities, but given its overall characters, nobody would have put it in that family."
The plant was christened Aenigmanu alvareziae -- the genus name means "mystery from Manu," while the species name honors Patricia Álvarez-Loayza, who found the living specimen that helped to place the species.
What strikes me about this whole story is how easily the branch of this little tree could have been forgotten in the herbarium, or the plant itself overlooked completely.  The Amazon is a big place, large swaths of which are unexplored.  While one odd plant species may not seem all that important, this does give us a sense of the extent to which we're blundering around damaging living ecosystems without even understanding them fully.  "Plants are understudied in general," said Robin Foster, the first scientist who noticed Aenigmanu back in 1973.  "Especially tropical forest plants.  Especially Amazon plants.  And especially plants in the upper Amazon.  To understand the changes taking place in the tropics, to protect what remains, and to restore areas that have been wiped out, plants are the foundation for everything that lives there and the most important to study.  Giving them unique names is the best way to organize information about them and call attention to them.  A single rare species may not by itself be important to an ecosystem, but collectively they tell us what is going on out there."
Conservation isn't some kind of academic game, and rare species shouldn't just be of interest to the taxonomists.  We need to understand on a visceral level that you can't pull threads out of the tapestry of life without the entire thing coming unraveled.  Chief Seattle said it best, back in 1854: "The Earth does not belong to man; man belongs to the Earth.  This we know.  All things are connected like the blood which unites one family...  Whatever befalls the Earth befalls the sons of the Earth.  Man did not weave the web of life; he is merely a strand in it.  Whatever he does to the web, he does to himself."
**********************************
During the first three centuries C.E., something remarkable happened; Rome went from a superpower, controlling much of Europe, the Middle East, and North Africa, to being a pair of weak, unstable fragments -- the Western and Eastern Roman Empires --torn by strife and internal squabbles, beset by invasions, with leaders for whom assassination was the most likely way to die.  (The year 238 C.E. is called "the year of six emperors" -- four were killed by their own guards, one hanged himself to avoid the same fate, and one died in battle.)
How could something like this happen?  The standard answer has usually been "the barbarians," groups such as the Goths, Vandals, Franks, Alans, and Huns who whittled away at the territory until there wasn't much left.  They played a role, there is no doubt of that; the Goths under their powerful leader Alaric actually sacked the city of Rome itself in the year 410.  But like with most historical events, the true answer is more complex -- and far more interesting.  In How Rome Fell, historian Adrian Goldsworthy shows how a variety of factors, including a succession of weak leaders, the growing power of the Roman army, and repeated epidemics took a nation that was thriving under emperors like Vespasian and Hadrian, finally descending into the chaos of the Dark Ages.
If you're a student of early history, you should read Goldsworthy's book.  It's fascinating -- and sobering -- to see how hard it is to maintain order in a society, and how easy it is to lose it.
[Note: if you purchase this book using the image/link below, part of the proceeds goes to support Skeptophilia!]