When someone talks about getting a glimpse of prehistory from the modern landscape, usually what they're referring to is either (1) rocks, or (2) fossils.

There's no doubt that those are our best clues.  I saw a good example of this last weekend while we were visiting some friends in the Catskill Mountains.  We'd gone for a hike alongside the beautiful tumbling West Kill Creek, and I saw the unmistakable polished surface and parallel grooves of a slickenside -- a rock that had been carved and worn smooth by the passage of a glacier, probably the one that last covered this entire region on the order of twenty thousand years ago.

Further back -- much further back -- the flaky, flat layers of gray shale and tan limestone that forms the majority of the bedrock around here is Devonian in age, something like three hundred million years old, when where I now sit was at the bottom of a shallow tropical ocean.  Those sediments were uplifted during the formation of the Appalachian Mountain range and have been slowly eroding ever since, with the outflow from the melting glaciers -- the same ones that left the scratches in the rocks I saw in the Catskills -- cutting the deep, steep-sided gorges this region is famous for. 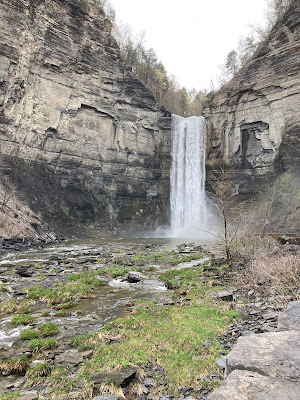 Taughannock Falls -- right up the road from where I live

It turns out, though, that inferences about the past don't just come from rocks and fossils.  A much rarer, but even cooler, phenomenon comes from biology; it's called a relict population or peripheral isolate -- a cluster of individuals of a species left behind and/or cut off from the rest of the population by some major geological event.  An especially interesting one was just discovered recently, and was the subject of a paper in Proceedings of the National Academy of Sciences just published yesterday.  It concerns a clump of red mangrove trees (Rhizophora mangle) along the banks of the San Pedro Mártir River in the Yucatan Peninsula.  What tipped off the researchers that this was something weird was that red mangroves usually only grow in the brackish or salty shallows of tropical ocean shores -- and this one was 170 kilometers inland from the nearest mangrove marshes, along the banks of a freshwater river, with no individuals of that species in between.

Apparently what happened is that these mangroves were left behind after a warm period of high sea level ended.  As the temperature cooled and more ocean water was locked up in the form of ice, the seas receded, cutting off the little clump of mangroves from their cousins.

Climatic oscillations during the Pleistocene played a major role in shaping the spatial distribution and demographic dynamics of Earth's biota, including our own species.  The Last Interglacial (LIG) or Eemian Period (ca. 130 to 115 thousand years B.P.) was particularly influential because this period of peak warmth led to the retreat of all ice sheets with concomitant changes in global sea level.  The impact of these strong environmental changes on the spatial distribution of marine and terrestrial ecosystems was severe as revealed by fossil data and paleogeographic modeling.  Here, we report the occurrence of an extant, inland mangrove ecosystem and demonstrate that it is a relict of the LIG.  This ecosystem is currently confined to the banks of the freshwater San Pedro Mártir River in the interior of the Mexico–Guatemala El Petén rainforests, 170 km away from the nearest ocean coast but showing the plant composition and physiognomy typical of a coastal lagoon ecosystem.  Integrating genomic, geologic, and floristic data with sea level modeling, we present evidence that this inland ecosystem reached its current location during the LIG and has persisted there in isolation ever since the oceans receded during the Wisconsin glaciation.  Our study provides a snapshot of the Pleistocene peak warmth and reveals biotic evidence that sea levels substantially influenced landscapes and species ranges in the tropics during this period.

"This discovery is extraordinary," said biologist Felipe Zapata, of the University of California - Los Angeles, who co-authored the paper.  "Not only are the red mangroves here with their origins printed in their DNA, but the whole coastal lagoon ecosystem of the last interglacial has found refuge here."

It's fascinating that you can use the distribution of a modern species to infer the conditions hundreds of thousands of years ago -- and, conversely, that the prehistoric climate and geology have left a distinct fingerprint on our current ecosystems.  It makes me wonder what the scientists of the far-distant future will be able to figure out about our world.  One of the ways that humans have changed things the most is the introduction of exotic species; in my part of the world, noxious pests like garlic mustard and Japanese beetles come to mind, but it bears mention that pigeons, dogs, cats, and horses are all introductions to North America that have established feral populations, as are most of the commonly consumed fruits (apples, peaches, pears, apricots, blackberries, raspberries, cherries, and all the citrus fruits), clover, dandelions, barberry, and just about all the species of grass you'd find in your lawn.

I wonder if future biologists will figure out how House Sparrows (Passer domesticus) got here, when their nearest relatives are all the way across the Atlantic Ocean.
The Earth, of course, is not done changing.  Even apart from what we're currently doing to the climate, there is the natural process of plate tectonics moving the continents around, altering patterns of ocean and air circulation with inevitable effects on the living ecosystems.  Piecing together what happened in the past can be done by looking at the present -- especially when you find a clump of trees that "shouldn't be there."
**********************************
During the first three centuries C.E., something remarkable happened; Rome went from a superpower, controlling much of Europe, the Middle East, and North Africa, to being a pair of weak, unstable fragments -- the Western and Eastern Roman Empires --torn by strife and internal squabbles, beset by invasions, with leaders for whom assassination was the most likely way to die.  (The year 238 C.E. is called "the year of six emperors" -- four were killed by their own guards, one hanged himself to avoid the same fate, and one died in battle.)
How could something like this happen?  The standard answer has usually been "the barbarians," groups such as the Goths, Vandals, Franks, Alans, and Huns who whittled away at the territory until there wasn't much left.  They played a role, there is no doubt of that; the Goths under their powerful leader Alaric actually sacked the city of Rome itself in the year 410.  But like with most historical events, the true answer is more complex -- and far more interesting.  In How Rome Fell, historian Adrian Goldsworthy shows how a variety of factors, including a succession of weak leaders, the growing power of the Roman army, and repeated epidemics took a nation that was thriving under emperors like Vespasian and Hadrian, finally descending into the chaos of the Dark Ages.
If you're a student of early history, you should read Goldsworthy's book.  It's fascinating -- and sobering -- to see how hard it is to maintain order in a society, and how easy it is to lose it.
[Note: if you purchase this book using the image/link below, part of the proceeds goes to support Skeptophilia!]