I'm currently benched from one of my favorite activities: running.

I have, once again, injured my back.  Four years ago, I got sciatica -- inflammation of the sciatic nerve -- that sidelined me for almost a year before it really had resolved enough that I could run again.  It's returned, probably due to my hefting around twenty-five kilogram bags of rock salt for our water softener a couple of weeks ago.  Like last time, there was no "uh-oh" moment, when I felt a twinge or a jolt; but the next day, I went for an easy four-mile run and ended up limping my way home.

At least it's on the opposite side this time, although I'm not honestly sure it's any better to injure new and different body parts than it is to keep re-injuring the same one over and over.

Seriously discouraging, mostly because I'm anticipating this thing once again taking a long time to heal.  I work with a kickass trainer, Kevin, who has informed me that he is not going to let me give up.  He's had issues with his back as well, so he knows the drill -- and knows things to do that will help.  Stretching, heating pads, using a TENS (trans-cutaneous electrical nerve stimulation) unit.  I've had suggestions from other people -- chiropractic and acupuncture topping the list -- but I've hesitated to go that direction, because from what I've read, neither one has been shown effective for treating injuries, and in fact there are cases of chiropractic adjustment making things worse.

So I'm following what Kevin says to do, and I'm seeing some gradual improvement.  Not nearly as fast as I'd like, but still, progress is progress.  I am not a patient person, and I'm very ready to get myself out there racing again. 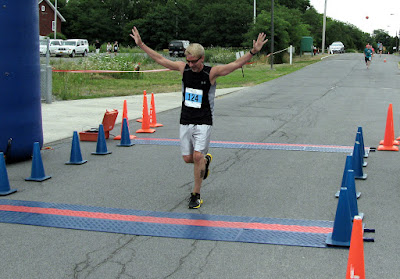 This is why I was very interested to read some research out of Harvard University this week supporting the claim that another commonly-used recovery technique -- massage -- apparently does have a positive therapeutic effect, beyond just feeling good.  A team led by Bo Ri Seo, of the Harvard's Wyss Institute for Biologically-Inspired Engineering, did an experiment with mice that not only showed massage speeds up healing, but gives a clue as to why it works.
Neutrophils are a type of white blood cell associated with inflammation; inflamed tissue produces chemical signals called cytokines, which acts to increase blood flow (thus the swelling associated with inflammation) and attract neutrophils to clear out the damaged tissue.  So this response is critical for initiating healing both in cases of infection and in mechanical injuries.
Which is all very well, up to a point.  "Neutrophils are known to kill and clear out pathogens and damaged tissue, but in this study we identified their direct impacts on muscle progenitor cell behaviors," said study co-author Stephanie McNamara.  "While the inflammatory response is important for regeneration in the initial stages of healing, it is equally important that inflammation is quickly resolved to enable the regenerative processes to run its full course."

The team worked with mice, and developed a little "massage gun" to exert regular, rhythmic pressure on their tiny muscles.  What they found was that the mechanical compression from a massage forces out both the neutrophils and the cytokines from damaged tissue, allowing them to heal not only faster, but stronger.  The rebuilt muscle tissue had thicker fibers, and also more fibers of the type involved with greater force production during contraction.
"These findings are remarkable because they indicate that we can influence the function of the body's immune system in a drug-free, non-invasive way," said team member Conor Walsh.  "This provides great motivation for the development of external, mechanical interventions to help accelerate and improve muscle and tissue healing that have the potential to be rapidly translated to the clinic."