I've written a number of scenes that have affected me emotionally while I was writing them.  Honestly, that's always what I'm trying to do to my readers -- grab them by the emotions and swing them around a little.  But none of them has struck me as so deeply poignant as this one, near the end of my novel The Communion of Shadows.

In it, the main character, Leandre Naquin, knows exactly when he's going to die -- on his thirtieth birthday.  The day he was born he had nearly died, but his mother made a bargain with the Angel of Death to take thirty years of her life and give them to her son.  The Angel of Death accepted the deal.  Leandre's mother dies young, and now approaching the age of thirty, he knows his own days are numbered. 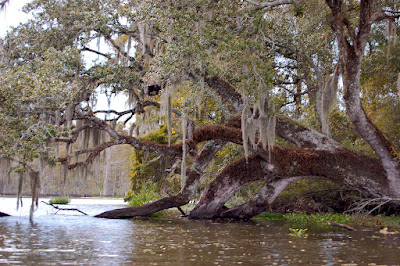 [Image licensed under the Creative Commons jc.winkler, Pic from the canoe on Bayou Corne, CC BY 2.0]
This scene happens the night before his thirtieth birthday, and is one of the few scenes I've written that had me writing through tears.  It's set in 1850 in southern Louisiana -- bayou country.

Leandre thought back once again of what he’d said to the others after telling his own story, that knowing the timing of his death hadn’t changed anything, and he wondered again why he’d lied to his friends.  Everything else he’d said was scrupulously honest, at least insofar as he knew the details, but that had been an outright falsehood.  He had such a habit of blithe indifference toward everything and everyone that apparently he even had to pretend that he could shrug his shoulders at his own impending death.

He rolled over in bed, sighing harshly.  “Maman,” he whispered to the darkness, “how did you do it?  You didn’t hesitate when the Angel of Death showed up.  You were confident that you’d chosen correctly and told him you didn’t regret anything, that you were ready to go.  How can I find the same courage?”

He peered around the dark interior of his little cottage, illuminated by a beam of moonlight coming through a half-opened window.  The only sound was a soft sigh, which could have been the night breeze—or perhaps a slow breath, or the rustle of a long skirt.

He sat up, the light blanket slipping off his shoulders, ears and eyes straining.  The silence had returned.  After a moment sitting there, holding his breath, he lay back down on his side, once again trying to force himself to relax.

Then his eyes caught movement.  In the corner of the room there was a light so faint he thought at first it was a reflection of the moon’s glow.  Like everything in the dimness it had little color, just a gauzy white shimmer that could easily be dismissed as a trick of the eye.

With a sudden jolt he knew what it was.  He’d seen it before.  He was looking at the spirit of Azélie Naquin, that silent and watchful ghost he’d last seen when he was a child, standing gazing at him from the corner of his bedroom just as she was now.  His heart thudded against his ribcage, a combination of fear and longing and grief coursing through his veins.

“Maman?”  His voice sounded thin and hoarse in his own ears.

There was no change in the apparition.

Suddenly all of his defenses, all of the pretense to calmness and indifference, collapsed.  He choked out the words, “I miss you so much,” then his voice broke.  Tears flowed down his cheeks, soaked his pillow, and he drew his legs up so that he was curled up on his side, hugging his knees.  “I said Papa never recovered from your death, but I see now I never did, either.  The ache is just as real as it ever was.”

The figure in the corner moved closer, gliding like fog, and he could see the smooth outlines of his mother’s cheeks, the curl of a strand of hair behind her ear, the faint trace of a smile on her lips.  There was the scent of lavender he remembered from his earliest days, its faint sweetness bringing back memories of pressing his face into her shoulder when he was barely old enough to walk.

Still she did not speak, just gazed at him in love and pity, and he felt his heart breaking again as if she’d only died yesterday, not twenty years earlier.

“How do I do it, Maman?”  His voice cracked again, and in his own ears he sounded like the ten-year-old child he had been.  “How can I know if I made the right choice, keeping myself apart so I wouldn’t cause anyone else pain, so I can let go and die satisfied as you did?”

For the first time the ghost spoke to him, and he heard Azélie Naquin’s gentle voice, as familiar as if he had only heard it yesterday, as if the preceding twenty years hadn’t happened.  “You can’t.  You can’t know, my dear son.  No one can.  Everything you do is a choice, and it affects every other choice you will make, every other possibility you have.  No one can know if they chose correctly, because it is never given to us to see what might have happened had we chosen otherwise.”

“How can you bear it?” he shouted, his voice thick with tears.

“By knowing we all are in the same condition.  You said yesterday that millions of other men and women and children have died, and if they could pass those gates, you could.  Then you derided yourself for lying, but it wasn’t a lie.”  She reached out one hand, and caressed his cheek with a touch light as a breath.  “How many people are taken untimely by sickness or accident, who die without having prepared themselves, without making amends to the ones they’ve hurt and saying farewell to the ones they’ve loved?  You and I, we’ve been given a great gift, to be aware that our time is limited, never to think we had forever to do what we wanted.  Don’t doubt your choices.  You did what you could.  It is, in the end, all any of us can do.”

“You will.  Whenever he comes for you, you will.  Because you will know, the whole time, that I am right there next to you, my hand on your shoulder, even if you don’t see me or hear me.”

She smiled, the moonlight glinting from her eyes, still barely visible as a shimmering outline in the dark air.  “Anyone who can see how beautiful and terrible and complex and incomprehensible life is, and not be frightened, is a fool.”

There was silence for a time in the room.

“Sleep, my brave son.  You will do what you need to, and do it with great courage.  Do not doubt yourself.  I never have.”

The image of Azélie Naquin vanished.

Leandre said, “Maman?”  There was no response.  He brought one arm up over his eyes, as if to block out the entire world, and wept like an orphaned child.
**********************************
During the first three centuries C.E., something remarkable happened; Rome went from a superpower, controlling much of Europe, the Middle East, and North Africa, to being a pair of weak, unstable fragments -- the Western and Eastern Roman Empires --torn by strife and internal squabbles, beset by invasions, with leaders for whom assassination was the most likely way to die.  (The year 238 C.E. is called "the year of six emperors" -- four were killed by their own guards, one hanged himself to avoid the same fate, and one died in battle.)
How could something like this happen?  The standard answer has usually been "the barbarians," groups such as the Goths, Vandals, Franks, Alans, and Huns who whittled away at the territory until there wasn't much left.  They played a role, there is no doubt of that; the Goths under their powerful leader Alaric actually sacked the city of Rome itself in the year 410.  But like with most historical events, the true answer is more complex -- and far more interesting.  In How Rome Fell, historian Adrian Goldsworthy shows how a variety of factors, including a succession of weak leaders, the growing power of the Roman army, and repeated epidemics took a nation that was thriving under emperors like Vespasian and Hadrian, finally descending into the chaos of the Dark Ages.
If you're a student of early history, you should read Goldsworthy's book.  It's fascinating -- and sobering -- to see how hard it is to maintain order in a society, and how easy it is to lose it.
[Note: if you purchase this book using the image/link below, part of the proceeds goes to support Skeptophilia!]